For the population, as a whole, to hold such high hopes for any fourth installment is something quite magical, but that is absolutely what Terminator Salvation has accomplished. T2 has already cemented itself into pop culture history as one of the most amazing sequels to ever grace the big screen, but can McG’s (Director) revamped labor of love hold it’s own alongside side such a fan pleasing juggernaut?

For those of you who’ve been playing ostrich (burying your head underground I mean) for the last couple months… Terminator Salvation continues the story of John Connor, the prophesied warrior that is meant to take down Skynet, as he struggles to come to terms with his destiny. Connor (Christian Bale) must lead a small group of survivors in a post-apocalyptic 2018. They form a human resistance to destroy the machines before all hope is lost. Marcus Write (Sam Worthington) is new to the Terminator tapestry and just may hold the key to Connor’s victory… or maybe to his defeat. Has he been sent from the future? Or is he a blast from the past? 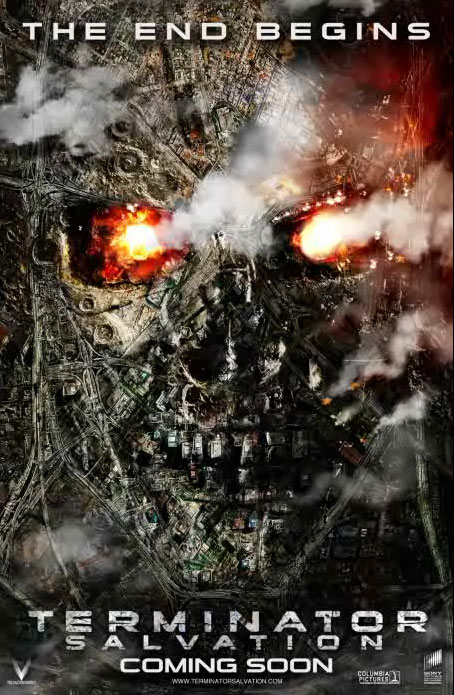 Terminator Salvation is very much divided up into two uniquely different movies… the first 80 minutes or so find their roots in the ever growing library of apocalyptic war films, while the last 20 find us catapulted into the action packed embrace of the sci-fi thriller… which makes perfect sense given the path clearly presented in the previous three films.

Most of this film offers us nothing more than Bale’s Batman in fatigues. His performance is as stale and as predictable as ever. That said, fans of Bale’s usual outings, or hardcore CGI/Action flick geeks will most likely eat this one up. To me, his character doesn’t feel like a real part of the film until the end… he just seems to in-your-face to fit into the slow paced war scenes. On the other hand, we get two very refreshing performances from Moon Bloodgood and Common, who didn’t get as much face time as they deserve. The film also succeeds where Terminator 3 failed. It truly makes the post judgment day future feel real and massive, which is important to such a gigantic story. Another pro, the machines’ severe upgrades are enough to make any nerd boil over with glee, they look more amazing than ever. Con, 80 minutes of boredom inducing over acting just isn’t enough to make the finale a loving payoff, even with the vast array of super surprises it packs. Even with, at least, two more sequels planned, I fear Judgment Day is the best the franchise may ever have to offer… but can that really be a bad thing?

Terminator Salvation really is an entertainment piñata, it’s just two bad that you have to sit back, blind folded, for almost an hour and a half, before you get to swing. This glass is half empty, sorry.