I’m sorry for my late review of The Sims 3. I had some trouble sitting down and writing it. I was too busy playing The Sims 3.

Living rooms and offices across the world were filled with the terrible gibberish “Simlish” on February 4, 2000 with the release of the original The Sims. By 2002, The Sims had become the best-selling PC game in history.  In 2002, I was scratching my head in amazement.

In February 2005 The Sims 2 smashed its way onto store shelves. Later it brought with it nearly a countless amount of expansions and spin-offs. I was still scratching my head in amazement.

Personally, I never got into The Sims. I tried it but I never felt the same escapist release that I found with other video games. At the time, I was living in a crappy apartment. I hated my job. I was lonely and didn’t have time to meet people. And I barely made enough money to pay my bills.

In The Sims, my character was living in a crappy apartment. His job stunk. He was lonely (and constantly yelling at me about it) and his income could only pay for the smallest lot in the game and a couch to sleep on. I would fast forward his life in hopes that he would start to make more money and potentially meet people. But all I was doing was fast forwarding him into a deeper and deeper depression and a monetary nightmare. I was left with only one thing to do: remove all the doors, windows and the toilet from his home and watch him wither like a sunflower. (Hey, I’m not sick. Misery loves company.) Afterward, I uninstalled The Sims, gifted it to someone who I thought would enjoy it more and moved on with my life to seemingly better titles on the PC and home consoles.

This year, The Sims 3 hit store shelves and digital download services on June 2. I was ready to hate The Sims all over again but I wanted to find out what the whole cult-like following was all about. I swallowed my pride. Donated $50 to feed the EA Fund and downloaded my copy straight from EA’s online store.

To my surprise, The Sims 3 is escapism at its finest. Over the past nine years, EA has certainly been honing is Sim-skillz (Sillz?).

For years I have been hunting Dracula, fighting alongside my fellow space marines, riding on my horse through hillsides eliminating orcs, and solving the mysteries of zombie-riddled mansions all within the shoes of someone else. In The Sims 3, I get to be myself and live my life without boundaries. That is what sets The Sims as a series apart from all other video games.

I set off to make my characters, which I found to be more customizable than I had predicted. At first, I made “Randy The Geek” who looked just like me but in Sim form. He had my same haircut, my same glasses and he wears clothes similar to my style. Sim Randy is artistic, he loves computers and video games, he has a green thumb, and just like the real-life Randy, he’s an international super-spy by trade. 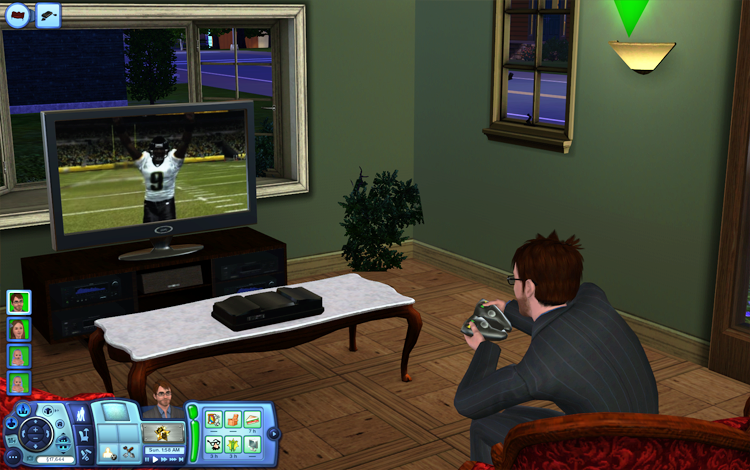 My wife created a replica of herself as well and we were able to start out our Sim-life as a married couple. Together we sit down and argue over how to spend our videogame money—I want to install a gigantic pool in the kitchen while she sees little use for that. Flapjacks and belly flops! Who wouldn’t love that? We laugh at the similarities that sometimes arise from our Sims. Her character gets mad at the mess that my character leaves as he sneaks off to one of the dark corners of the house to play video games.

The game still starts as weakly as the first Sims. We both chose our career paths. For a few hours, we struggled with our bills. We hated our home and our Sims were generally unhappy with us. But unlike the first Sims, it doesn’t take long for your Sim to start getting raises at work and for you to be able to start customizing your Sim experience. We added onto our house. I took up fishing and gardening while my wife went to the community pool (the real pool had not yet installed in our kitchen), exercised and scoured the outskirts of town for hidden treasures. 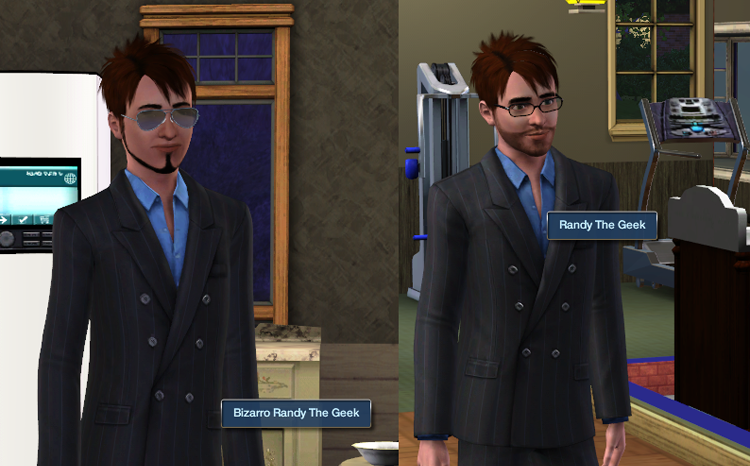 When my wife and I aren’t playing the game together, I play “Bizarro Randy The Geek” who looks just like my other Sim Randy, but he has a beard so you know he’s evil. And he is evil. I made it one of his characteristics. He’s evil, a kleptomaniac, insane and his life goal is to become the leader of a criminal organization. Bizarro Randy isn’t married. Since he works at night and sleeps during the day, he bangs the blonde maid that comes by to clean the house. He lives in an evil fortress (designed by yours truly) in the absolute furthest point from the center of town. He generally only visits town to go to work and also to weasel his way into other Sims homes to steal their light bulbs and couches.

Sims level up just like characters in a role-playing game. The more you use a certain skill set, the more proficient your Sim becomes in that skill. Much like someone in a fantasy role-playing game can say they are a level 13 Wood Elf Ranger with proficiencies in fletching, tracking and stealth, I can say my Sim is level 10 in his career with proficiencies in logic and gardening. Sims 3 is Dungeons & Dragons for people who don’t like Dungeons & Dragons and fantasy; the same way Fantasy Football/Baseball is Dungeons & Dragons for people who love sports.

The controls in The Sims 3 are incredibly easy to master. Almost every control in the game can be done with the mouse. All interactions are done with left clicking. Right clicking controls most of the lateral movements with the camera, while scrolling with the center mouse wheel will zoom in and out. They’re very similar to the controls found in the Neverwinter Nights 2 series.

Graphically, the game isn’t that big of step forward from The Sims 2. There are no load times, however. Once the game is loaded, there is no stopping it unless you stop it yourself.

Since there is no official The Sims 3 story, you make your own story as you play along. Whether or not your Sim gets married, has children, builds a dream home, or becomes the terror of the neighborhood is up to you. The game as a whole is relatively slow paced, so it’s excellent for anyone who considers themselves a non-gamer. For the most part, it’s family friendly too. Any devious activity is done on your own behalf. Since Sims speak in Simlish, you don’t have to worry about swearing in front of delicate ears. All sexual relations within Sim life are consensual and tastefully displayed. There’s no nudity within The Sims. 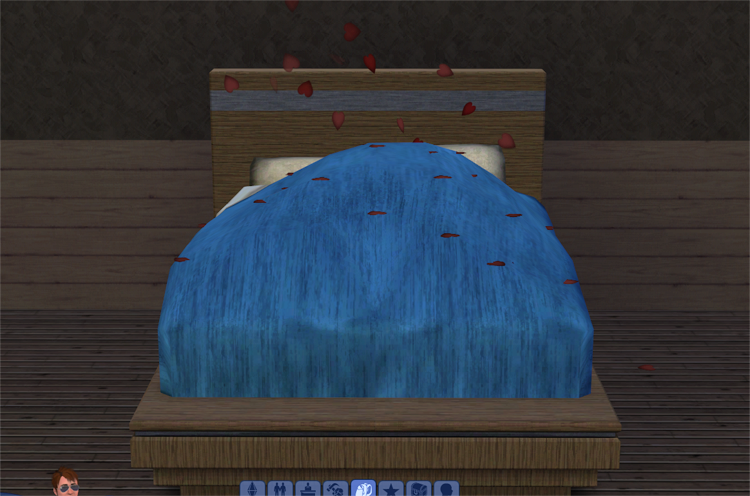 The Sims 3 is not without its flaws, however. There is no auto-save that I could find. And when the game crashes (all PC games crash occasionally) there’s no way to recover what was lost, which might be a few hours of your labor. Saving the game is a crapshoot. In the release version of The Sims 3, there is a known bug of errors while saving. There is nothing more frustrating than doing something completely fantastic in-game then going to save, only to have the entire thing crash on you. The game also launches with The Sims Store online which is LOADED with all kinds of goodies. It only makes me wonder why the game wasn’t originally released with those items. I realize it is a marketing tactic, but it feels like a slap in the face similar to the Resident Evil 5 multiplayer add-on. 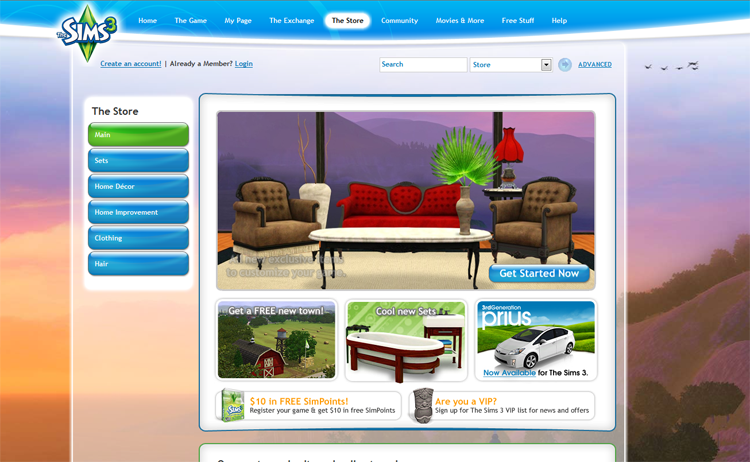 Vanilla Sims 3 though, is a fantastic experience. Even without purchasing add-ons, most players will find themselves satisfactorily engrossed for hours.

I can whole-heartedly recommend The Sims 3 to almost anyone except the overly stereotypical “hardcore” gamer. Its one of those games where you lose track of time while playing it. You tell yourself “I’m going to play for only 15 more minutes.” You think only 15 minutes have passed but when you look at the clock again, you realize it’s 2 days later and the dog is banging his food dish against the door for attention. It’s a great game to share and play with anyone in your household. The only downside is you can’t both control your characters at the same time. You have to take turns. But making decisions together is both fun and a bonding experience.

The Sims 3 is easily going to land on my personal top 10 games of 2009 unless 10 other pristine games come along between now and December to knock it from its post.

Thanks for reading my review. You’ll have to excuse me. I’m a little shaky from not playing The Sims. I’ll see you all again in 4 months.