When you first play Tiger Woods, a screen pops up showing all the new inclusions in Tiger 10. Those new additions are:  WMP, Real-Time Weather, Live Tournaments, Precision Putting, Disc Golf, and 7 new courses.  Once you go through the new inclusions menu, the game will ask you to pick your difficulty level and if you are a left hander or a right hander. After the initial set up, the game will ask you to go through a few tutorials, and I recommend you go through them especially if you are using WMP just to get a feel for the game. After all of the intros, you are ready to play.

The main menu has the usual fare of menus: Play Now, Disc Golf, My Career, Golf Party, Game Modes, Tutorials, Online, and of course the Options menu. In the Game Modes menu you have your Traditional game modes, Arcade Golf modes, and Mini-Games mode. . .  pretty straightforward. The Options menu and the Tutorials menu are also pretty straightforward, no real explanation needed for those.  The Golf Party menu is where you go if you want to just have fun with some mini-games with friends to see who is the best.

Disc Golf game mode really shows off the WMP’s capabilities. Throwing a virtual Frisbee hasn’t been this much fun until now. You get to play on all 27 courses when you unlock them in the normal game. All the same rules apply from normal golf, with the added rules of landing in a sand trap (bunker) and on a cart path will get you a 1 stroke penalty. Playing disc golf is easy, just pick up the disc with the B button and throw, but make sure you look at the wind conditions and the angle of your throw, and how far to the goal you are. Once you get really close to the goal, you only have to do a small gesture and the disc will go into the goal. 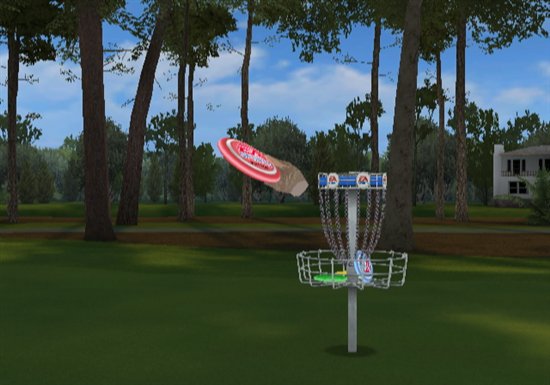 In My Career mode you will be able to create your own character and play through to see if you can become the greatest golfer known to man. In this mode you get to outfit your character with clothes, jewelry, clubs, stats (how powerful your character is, etc.), swing style, and character animations for taunts. You will spend most of your time trying to improve your character’s stats and unlock more pro characters and courses. At any time you can compete in the Fed EX Cup to prove your skills and win more money to purchase more and better items. The Tiger Challenges return but is renamed Tournament Challenge, where you unlock new pro characters and courses.

The controls are pretty much the same as previous entries in the series but with some added features. There is a new precision putting mode that makes putting feel more like real putting. If you do not like the precision putting you can always go back to the classic putting option. The main control input is the swing mechanic. With WMP, the controls feel more natural than without WMP, mainly because the normal Wii Remote is just too inaccurate in sensing when you start a swing and how hard you swing. With the Wii Motion Plus attachment it is so much easier to perform a draw and fade shot, allowing you to curve your shot left and right respectively (opposite if you are a left hander). The A Button shows where the ball will land, the – button brings up a shot path (usually for putting). The + button brings up the pause menu. The B button and pointing the Wiimote down will start your swing, while holding the A+B buttons will let you practice your swing.  To help you get out of those sticky lies there are different shot types; lobs, pitches, full shots, and punch shots. 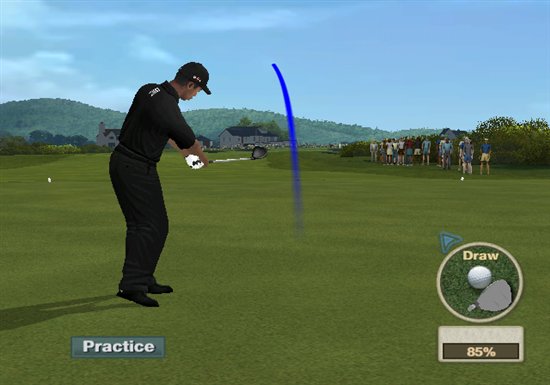 Also this time around there are more online options. If you are wondering if online is through Nintendo, worry not. Tiger Woods PGA Tour 10 uses EA Online, so your connection will most likely be fine. You can play online with your friends. EA Online shows leader boards with weekly and daily challenges. The New mode in EA Online allows you to play against actual professionals’ scores of the tournaments that are going on at the time. So if you want to prove you are better than Tiger in his most recent match, go ahead!

I realize that the graphics are not that great, but the Wii can only do so much. The crowds are relatively small. There is wildlife on the course, but their animations are laughable.

As a standard, there are the two commentators who will give a brief description of the hole you are on before your tee shot. They also comment on your most recent shot. After a short amount of time the commentators repeat themselves, but that happens in all sports games. 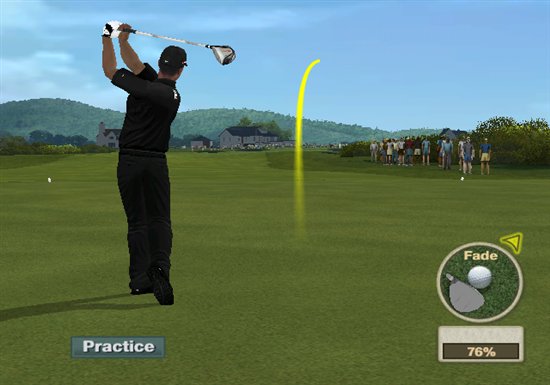 In the end, Tiger Woods PGA Tour 10 is a much improved game that makes you feel more like you are golfing then previous games on the Wii. With having 27 pro lavish golf courses from around the world, you will have plenty of choices for your next trip on the digital links. I highly recommend picking up Tiger Woods if you enjoy golfing and if you have a Wii, but make sure you get the bundle with Wii Motion Plus because standard controls are horrible.  If you want to give Tiger a try, go ahead and rent it, but if you rent it you should get a standalone Wii Motion Plus for $20. Oh, and the Bundle with Wii Motion Plus for Tiger is a US exclusive—sorry to the rest of the world—but there are also other bundles like Grand Slam Tennis, and the up-and-coming Wii Sports Resort, and Red Steel 2 that will all come bundled with WMP.

About the Author: John Jinneman has been gaming for over 14 years and started like many of us playing Super Mario Bros. on the Nintendo Entertainment System. This is John’s second article for Elder-Geek.com.