Archmage Defense is a castle defense game that showed up on the top 50’s list on the App store for the iPhone a couple of weeks ago, the game is made by CDE a developer behind almost 30 successful iPhone apps and games.

Archmage Defense is not your typical Castle Defense game. Instead of being able to strategically move around your character, he remains locked in place. What you can control however are your abilities, and to a much greater degree. 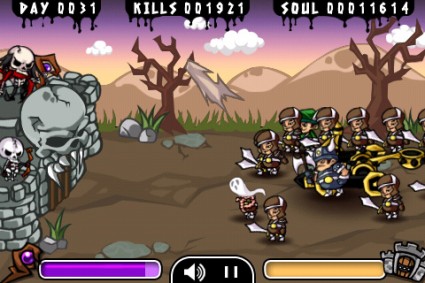 The first magic power you get is the Chain Lightning. This has you move your finger from the Archmage himself and sweep it across any enemies you want to fry. Fractions of a second later, a lightning strike will shoot out and follow the exact path you drew, utilizing the iPhone touchscreen to great effect. Another power is Ignite, which has you drawing a circle on the screen above the enemy you want to ignite; doing so causes a flare to fall down from the sky and set fire to your enemy. The fire also spreads to nearby enemies and can result in massive combos. Last, and unfortunately also least, you have the freeze ability, which lets you double tap on the screen to encase an enemy in a block of ice for a short period of time. This is mostly useless because not only is it the only spell that isn’t an area-of-effect spell, but it’s also never really needed. If you have the time to pick one single enemy out and freeze him you also have the time to fry him with a lightning strike. So what’s the point? 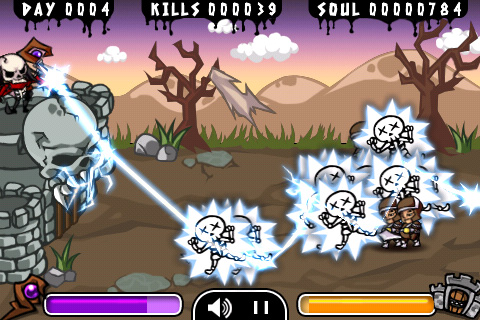 After you clear the first wave of enemies, you’re introduced to a screen called “research.” This is where you get the chance to purchase new abilities or upgrade old ones, using the points you’ve gathered by killing enemies. In addition, you can use your points to repair any damage your castle has sustained. You can buy a skeleton ranger minion who automatically attacks any enemy who gets to close. And you can also upgrade the life and magic points of your castle, something you’ll be forced to do in the later levels. 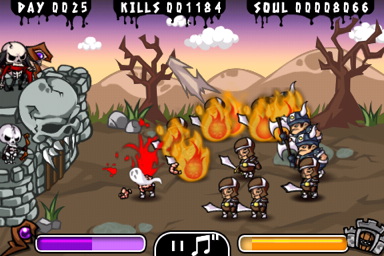 The enemies are mostly made up of what looks like farmers or villagers that have taken arms, though in later levels you’ll encounter knights, rangers and catapults, all with different abilities, strengths and weaknesses. The game takes place in the same forest background setting throughout each and every level, but it mixes things up somewhat by randomly making it rain once in a while, changing the look as well as making your fire attack useless and your lightning attack even deadlier. 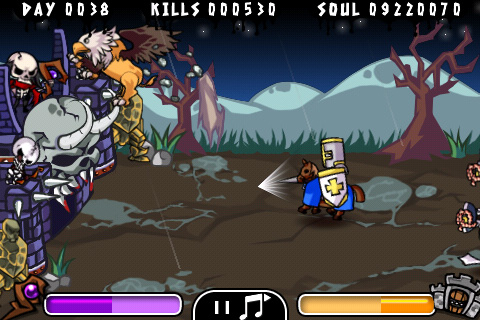 The levels are measured in days. After each wave of enemies and once your time spent in the research screen concludes, a day passes. And since each wave only lasts for about a minute you’ll reach 50+ days in no time. The game saves progress after each day so it’s the perfect pick up and play game for those of you who are just looking for a quick time waster while at work or on a commute.

You can also purchase an expansion to Archmage Defense featuring two new spells and three new enemies for $1. It also gives your castle a new and more evil appearance. The new spells and enemies are really interesting and fun to use and kill. Given that the game itself is only $1, I’d say it’s definitely worth the upgrade.

All in all, Archmage Defence is a great game that’s more the worth it’s price. Sure it’s a recipe for repetition, but it’s the good kind! The kind that you can zone out to while listening to your favorite music and skipping work.

One thought on “Archmage Defense”