Terminal Reality and Atari are trying to revive Ghostbusters 20 years after the theatrical release of Ghostbusters II. What’s not to like about Ghostbusters? You’ve got Bill Murray, Dan Aykroyd, Harold Ramis and Ernie Hudson cracking jokes and fighting ghosts. It sounds like the perfect premise for a videogame, but is it? 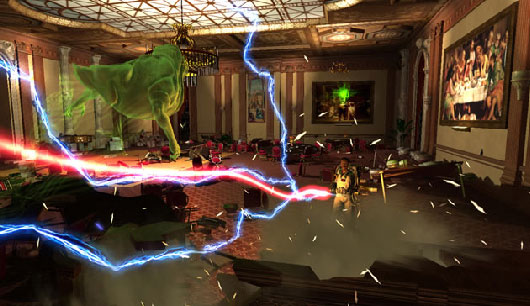 In Ghostbusters: The Video Game you play the role of a new recruit on the Ghostbusters team. Egon explains that your job is test new weapons to make sure they are safe for the rest of the team. As a rookie, you accidentally release Slimer, who ventures back to the Sedgewick Hotel causing a chain of events that leads Egon to hypothesize the Ghost World is pushing through the fabric of reality… or space… or something like that.

The developers do a great job of submersing you into the Ghostbusters world with familiar faces and environments all around. There are also tons of Bill Murray one-liners, most of which are quite funny. If you enjoyed the humor of the movies, then you will certainly enjoy the wisecracks from these four comedians.  Even the pushy Mr. Peck from the EPA makes an appearance. The firehouse is available to explore. You even get to battle the Stay Puft Marshmallow Man which is exactly as awesome as it should be. It wouldn’t be a Ghostbusters adventure without the incredibly catchy theme song… and you’ll hear it during every loading screen. It gets old. Everything that is needed for a Ghostbusters game is here—except Sigourney Weaver. 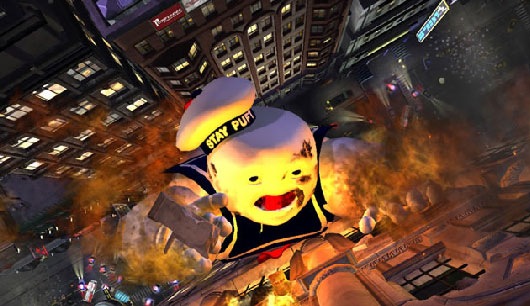 The graphics in the game are incredible. The developers seemingly spent an enormous amount of time on the character’s faces because they all have an absurdly accurate likeness of their real-life counterparts. All the bright colors from the different weapons and the transparent visages of ghosts look incredible regardless of the scenery. I do have a problem with a few of the level designs; namely the sewers. They’re too dark. You are equipped with a flashlight, but there was is a lighting issue that renders the flashlight useless most of the time, leaving you shrouded in darkness. 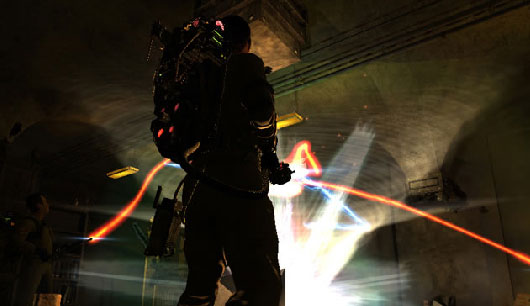 When you capture ghosts, you are rewarded with money. With that money you can purchase upgrades for your weapons. The monetary rewards come a little too easily.  I had all of my weapons upgraded halfway through the game, but it’s still a good idea.

Unfortunately, even though this game has a lot going for it, the gameplay is very standard and uninspired. It felt exactly like Gears of War just reskinned with Ghostbusters stuff. It only took me six hours to beat on the standard difficulty and about a fifth of that is cut scenes. The levels follow a very similar pattern with you and the team starting out, getting separated, finding each other, going into the Ghost World, killing a boss and reconvening in New York City. Even though the game was so short, I got very tired of the gameplay pretty quickly. Throwing in new weapons certainly helped, but that just didn’t add enough to the game. 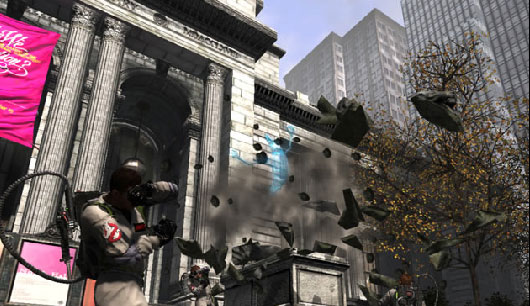 The multiplayer options add a bit of playability to the game, but they are the same game types we have been playing for years. Protection was my favorite type, where you work as a team to defend different areas while holding off ghosts. Multiplayer also includes:

Survival – much like Horde from Gears of War 2, where you just hold your ground and fight off ghosts.

Containment – You must capture all the ghosts.

Destruction – Take out different artifacts to stop ghosts from spawning.

Thief – Keep artifacts from being stolen by ghosts.

Slime Dunk – You have to capture Slimer and slam him into different ghost traps to get points.

The bottom line is if you’re a Ghostbusters fan, rent this game and play through it. For those of you just looking for a new game, I would look elsewhere. The campaign mode is just too short and the multiplayer isn’t addicting enough to warrant full price for this game.