As a Bond game, Quantum of Solace is mediocre at best; as a stand-alone First Person Shooter (FPS) you will be better off spending your time and money elsewhere.  Nothing exists within Quantum of Solace that makes it stand out in a gaming market flooded with FPS’s. As of the date of this review (July 2009) there are so many better FPS’s available that unless you are a James Bond fanatic you would be best served by letting Quantum of Solace quietly drift off to the bargain bins.

The game runs on the Call of Duty 4 engine and has decent graphics but nothing breathtaking. Controls are solid and function well with no problems walking, turning, aiming, and so forth.  The game has different difficulty settings based on the player’s own assumed FPS skills, so it can be as easy or difficult as you like.  Health is regenerated automatically if you avoid enemies’ bullets, and comes back faster if you duck behind cover.

Quantum of Solace allows you to take cover behind stationary object to avoid enemies’ bullets while still being able to fire back at them.  When in cover you are pushed into a third person perspective over Bond’s shoulder.  From here you can now hit your enemies with “no-look” shots by placing a bulls-eye where you hope your bullet will go, blasting away, and hoping you plug the bad guy.  Your shots are typically inaccurate but this makes sense since Bond has his head down and can not actually see where he is shooting.  This was an interesting addition to the game, but the novelty wore off and I chose to save time and bullets by poking my head out from behind cover to squeeze off my shots. 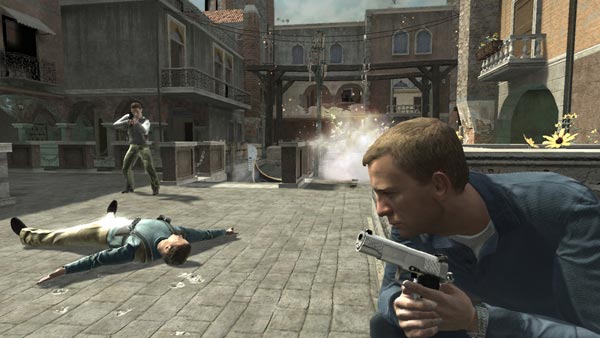 Enemy artificial intelligence is predictable and rarely challenging.  The bad guys run into the room, take cover, pop up like whack-a-moles, and if you stay in one location for too long, they lob a grenade your way.  On a few occasions I found enemies who would start yelling, “Aaaaaaaaaaaaaaa!” and rush my position.  These guys were easy to deal with since you just aim at the screaming idiot and shoot.

There are no gadgets or gizmos to be found in the main missions and there are no vehicles to drive.  The whole game is done on foot as a basic FPS, though there is one level where you get poisoned and control a drunkenly stumbling Bond to his car.

You start each level with your P99 pistol and can pick up any of your recently deceased enemies’ weapons and ammo, with an occasional power weapon hidden away in a side room.  The game allows you to carry up to three guns at a time, which includes your P99 that you can not get rid of under any circumstance.

The in-game weapons range from semi-automatic pistols and submachine guns, to assault rifles, sniper rifles, shotguns, grenade launchers, and “make-my-day” revolvers.  Most guns have multiple firing options (single shot, three shot burst, full auto) and can be further modified by adding the one-size-fits-all silencer Bond carries with him. The silencer can be applied to virtually every gun in the game except for the shotgun, grenade launcher, and revolver.

Hand grenades are all but useless, though in the event you do want one they are available only after an enemy drops one after dying.  Once you throw a grenade, the enemies yell to their buddies that a grenade is nearby causing everyone to run far enough away that they are unaffected by the ensuing blast.  Grenades in Quantum of Solace seem best suited to scatter enemies and force them from cover instead of just exploding and killing the intended target. 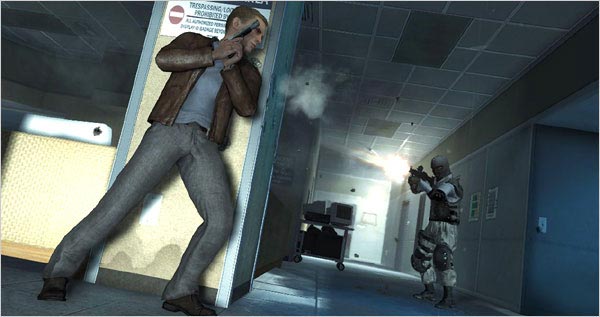 If it’s explosions you are looking for just do a quick scan of your in-game surroundings.  Typically there are no less than ten items on the screen that can be shot and blown up.  Some, like fire extinguishers, temporarily blind your enemies, while other items, like gas cylinders and forklifts, go up in large fireballs.  The game makes no attempt to hide these explosive environmental items, but instead makes them glow, beckoning your attention.

There is no thought involved when deciding where in the mission you are to head to next.  A bar at the top of the screen complete with large white dot points you to your next destination.  You do not need to remember what MI6 set as goals, just follow the glowing white ball, shoot the bad guys who show up, and wait for the white ball to point you to your next destination.

One of the more annoying aspects of Quantum of Solace is the randomly inserted fine motor skills tests.  World renowned secret agent James Bond seems to have troubles with 2×4 pieces of lumber.  When you encounter one of these devious items the game shifts to a third person perspective and it is then up to you to keep Bond centered on the board as he crosses a chasm.   Our hero can take multiple assault rifle bullets and get hit point blank with a shotgun blast, but let him fall off a ten foot high board and he’s dead. 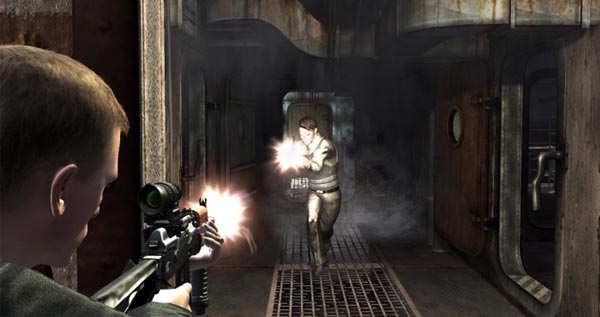 Hacking electronic locks and working through extended fight scenes are done by pressing buttons on your controller in conjunction with what was just flashed on the TV screen.  Nothing difficult about this, but going through scripted fights in this manner was disappointing.

Story-wise you are Daniel Craig’s version of James Bond.  Loosely following the storylines of Bond films “Quantum of Solace” and its predecessor “Casino Royale” the game picks up seconds after the “Casino Royale” movie ends.  Bond has snipered Mr. White at White’s estate and is preparing to confront the now disabled bad guy.  White’s bodyguards arrive on scene and the first of many firefights begin.

You split your time between the events of “Quantum of Solace” and “Casino Royale,” revisiting “Casino Royale” through a flashback about 1/3 of the way through the game.  Once you start your “Casino Royale” flashback you stay in it until the very last level of the game.  The last level is where you venture off to the hotel in the Bolivian desert and blow it up.  The story often drifts very far from what happened in the movies, so if you do pick up this game, be prepared for a different tale than one told on the silver screen.

Levels typically begin and end with a short video sequence.  Between levels the story is progressed by an unseen M and MI6 employee discussing what is happening while a summary of relevant global locations and persons-of-interest are shown on the screen.

I found no worthwhile unlockable cheats or toys for use in the game, no starting the game with power weapons, no unlimited ammo, no infinite health, nothing.  Finishing levels, killing enemies in certain ways, or in certain numbers earns you trophies named after Bond films or Bond related phrases but nothing more.  MI6 rooms do become available for exploration following successful completion of a level; though this merely allows you to walk around and review the weapons, vehicles, and other items relevant to that level.

Admittedly I have not played the game in multi-player mode.  Possibly this is where its strength lies, but I’m not going to gamble and try.   I can not recommend the purchase of Quantum of Solace to anyone, and would only somewhat recommend renting the game to my more Bond-obsessed friends.  The only possible reason this game is still commanding retail shelf space is because it belongs to the 007 franchise.

About the author – Joe Mattucci refuses to pay MSRP for any game, but instead stands in stores and stares sadly at the games he wants hoping a kind stranger will buy it for him out of pity.  He is currently no longer welcome at Wal-Mart, K-Mart, and oddly enough Amazon.com.

One thought on “Quantum of Solace Review”