When it comes to PC gaming, Real Time Strategy (RTS) games are king. There are many time periods portrayed in the various games, ranging from the Dark ages to the Present, and into the future with Space Marines and Aliens. Every once in awhile a new game steps into the RTS genre that changes the genre for the better, to make future games less bland. Sins of a Solar Empire is one of those games.

Sins of a Solar Empire takes place in space, yes with ships and all that, no ground units at all. Right on the box the game boasts “Unrivaled Scale,” and Sins delivers on that statement. The Scale of Sins of a Solar Empire is massive, and rightfully so because you are in space after all. You can have well over 100 planets or other special anomalies under your control, making one game potentially last for hours, even days. 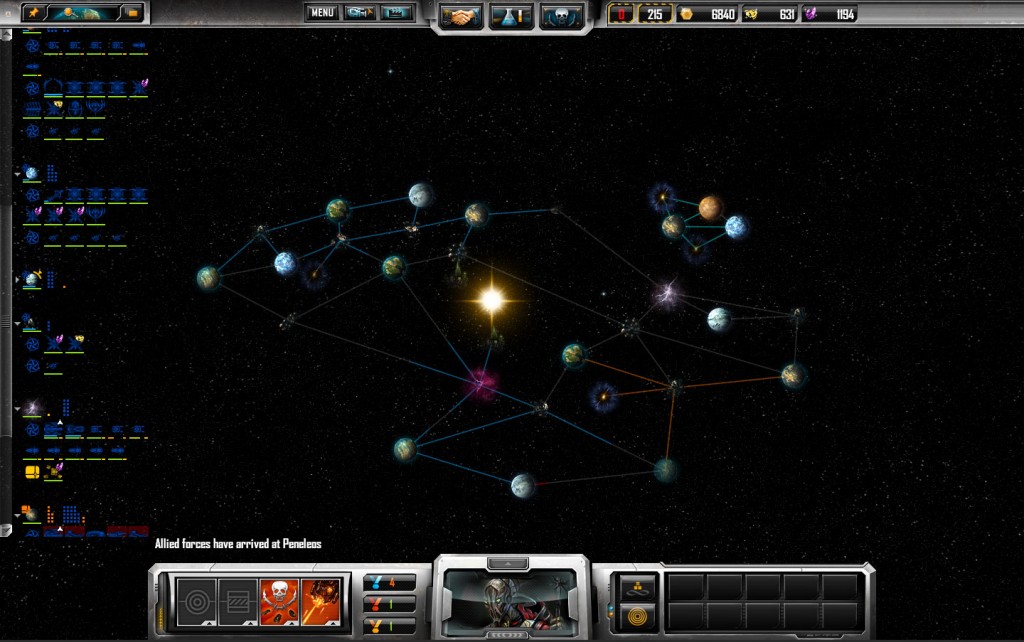 The first thing that comes to mind when presented with a huge open world like this is graphics. The setting of Sins of a Solar Empire is beautiful with all the different planets, stars, ships, and even Nebula Clouds in the background. Up close some of the Textures seem a little blurry, but that doesn’t matter too much when there is so much going on, zoomed out at a distance is where you’ll spend most of your playing time anyway.

As with any RTS, combat is the most important part of the game, besides base expansion and research. There are three races to choose from: The Trader Emergency Coalition (TEC, The Human Race), The Advent (a highly developed race that is spiritual, psychic, and has cybernetic technologies, and all about ‘The Unity’), and The Vasari (The Alien Race). Each race has their own perks, dealing with economics, warfare, diplomacy, and general defense. All the races have the same types of buildings, but the biggest difference is the defense weapons. Also the tech tree is laid out a little differently with the different races, with each race having some perks like more resistance to pirate attacks, better resource collecting, and the likes. The upgrades in the tech tree are determined my how many research facilities you’ve built, and the only way to acquire some ships and buildings are to research them. 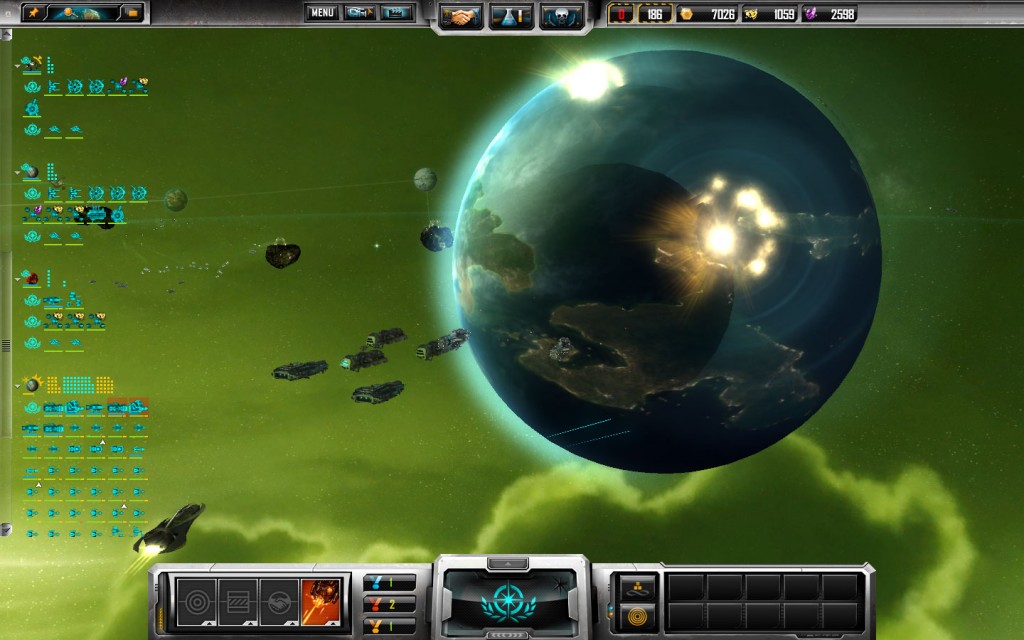 Combat wouldn’t be possible without the units however, and this game has a bunch of them. Your ships are made up of three classes: Frigates, Cruisers, and Capital Ships. The Frigates make up most of you armada, ranging from small strike ships that can colonize planets or capture more resource platforms, to the heavy strike ships capable of taking down large ships and planets. The Cruisers are your support ships that can add extra damage to your other ships as well as heal them, plus the Cruisers can have special abilities that stop an enemy’s units from working. The Capital ships are your “Hero” units. Meaning that they have levels and massive fire power, but beware since these ships are really expensive to produce and maintain. Combat is simple, get a bunch of units together and go after the enemy. To succeed in this you’ll need to research and upgrade your defensive, offensive and transportation abilities making sure you’re always one step ahead of the enemy.

Most RTS games feature hot-keys and Sins of a Solar Empire is no exception. At anytime during play or in the main menu you can change your key bindings to whatever you want while still being able to use the mouse for anything you want. Using the mouse instead of hot-keys for everything can be a bit of a hassle so I suggest in that case that you keep everything zoomed out for maximum control. Besides Key Bindings there are customizing in: Screen resolution, Screen refresh rate, anti-aliasing, and your standard Sound effects options, plus options in visuals in game. All standard stuff.

There are three options of play in Sins of a Solar empire; singleplayer, multiplayer, and Ironclad Online. If you are expecting a huge story to be in the Single Player mode, then you’ll be disappointed, besides the opening movie story in Sins of a Solar Empire is non existent. In fact the only reason real to play singleplayer before multiplayer is for the tutorial, which you’ll need to go through if you intend succeed in multiplayer. Sins of a Solar Empire does feature achievements for completing tasks, unfortunately these can only be done in singleplayer, making their appeal diminish. You can also create your own maps and play/share them with others.

Ironclad Online is the games online multiplayer mode, for this mode you’ll need to have an authenticated copy of the game, so even though it’s a game without any sort of copy protection some steps have been taken to ensure the developers survival, and rightfully so.

When you decide to play a game, you can pick from one of many pre-made levels, any randomly generated level, or your own levels to play on. Choosing a race is a simple click of a button, and in singleplayer mode you can also choose the enemies races, play style and difficulty level. Another option is to decide on how fast research is carried out and if the resources will be high yield or low yield.

Yes, Sins of a Solar Empire has resources, but the good news is that they are automatically collected, so no resource gatherers will need to be built taking up your population limit. Credits will be gained through taxes on planets, and paying for Planet Development will increase the amount of taxes gained, plus trade ports can be built to gain more resources, and there is always the black market. The other two resources are Metal and Crystals, and those can be gained on little asteroids floating inside of the gravity wells of the planets and space anomalies. 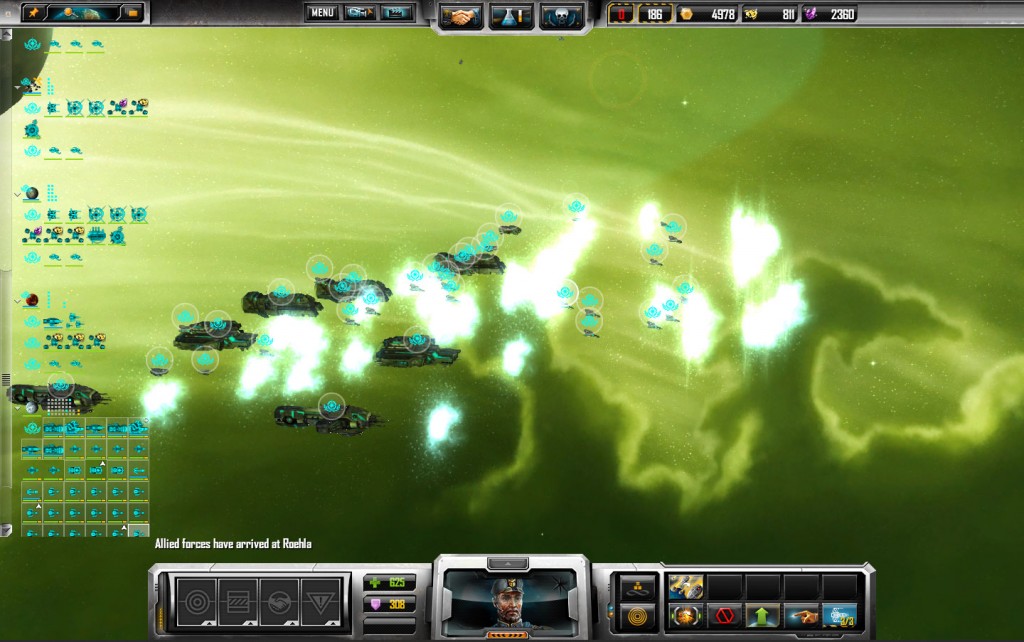 I recommend Sins of a Solar Empire, it is fun and the scale is just huge, plus there is a micro expansion called Entrenchment that adds greatly to the gameplay. The price tag is decent and you can load it on multiple computers so you can try it out before you buy it for yourself.

About the Author: John Jinneman has been gaming for the past 14 years. John’s interest in games has grown over the past few years, and a lot of things geeky as well.