With the death of Uther Pendragon, the realm of Britannia falls into chaos, and war spreads throughout the land between the various warlords and princes vying to fill the power void. A new true king is needed to restore peace to the land. When a boy steps forward and wrests Excalibur out of the great anvil that holds it, Arthur, the true son and heir of Uther Pendragon, becomes the new king. So begins your adventure in Neocore Game’s King Arthur: The Role-playing Wargame. 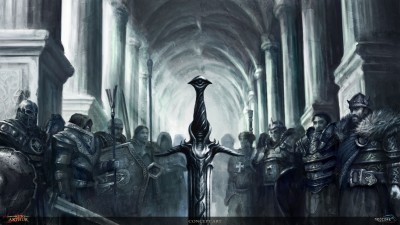 The one who can free Excalibur will rule!

This latest installment to the RTS genre explores the world of mythical Britannia and the world of King Arthur, a legend that has been read throughout centuries. Players begin the game immediately after Arthur raises Excalibur from the anvil. Consequently, the country’s warlords and princes continue to fight for power as you struggle to recruit men and reliable, loyal knights to your banner and restore unity and peace to the realm. 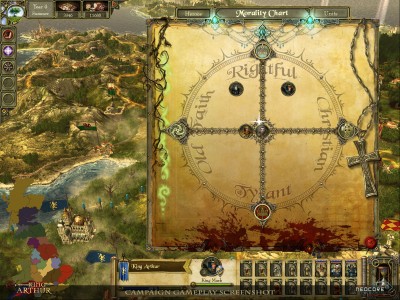 What sort of king will you be?

What really sets this game apart from other traditional build-and-rush RTS games is its blending of RTS features with RPG elements. Although King Arthur utilizes the RTS feature for combat, movement, recruitment, and mobilization of resources, the developers of Neocore Games added an adventure element where players will be able to follow the story of King Arthur and his fabled Knights of the Round Table and complete a series of open-ended quests that determine your popularity and your character throughout Britain. Also, there are four choices on a morality chart that are determined by the players actions throughout the game: Rightful, Tyrant, Christian, Old Faith. Each of these morals are exactly what they are intended. Depending on your actions, you may gain new followers, ladies in waiting, as well as mystical items and weapons that have unique features, which could be used to supplement your heroes’ attributes. True to an open-ended RPG, depending on your path to victory, there are also different endings to the campaign based on your choices throughout your quest. In addition, with each completed quest and victorious battle your heroes gain experience points that allow them to improve their unique skills in battle and future challenging quests. 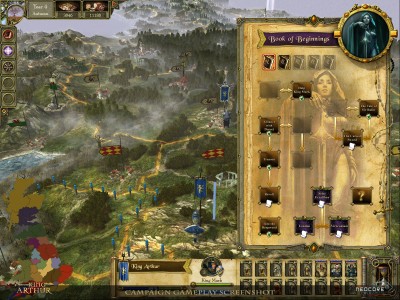 The road to victory is long.

Once players begin the first chapter out of four of the grand campaign, many RTS gamers will automatically notice a familiar feature seen in many RTS titles and that is the Campaign map, which shows all the provinces with its cities and landmarks and military units as well as quest objectives, reminiscent of the Total War series’ map style. On the Campaign map screen, players will be able to control the movement of armies, manage recruitment, as well as assigning new attributes and skills to units and heroes to increase their quality. Once players have completed their turns, they will notice that the game operates on a four seasons system. Certain actions available depending on the season such as the upgrading of units, researching new technologies, and establishing royal laws. This can be frustrating at times, especially when you are waiting for your gold and food reserves to replenish in the winter. If you are running out of these essentials, there is only so much that can be accomplished until the next tax period. 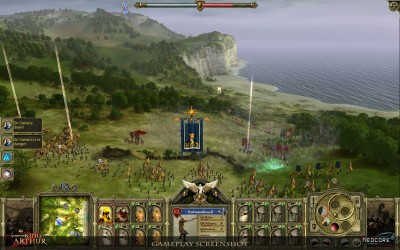 King Arthur would not be complete without the combat element, which is a vital part of conquering the various provinces into the realm. When you choose to attack an enemy army on the Campaign map, you are given a choice of a variety of maps featuring different weather and terrain conditions that could prove advantageous to the type of troops that you control. Within each of these battlefield maps, there are different objectives, which you are able to take in order to increase the morale of your forces. Also, some of these victory locations provide unique boosts for you throughout the battle, making the occupation of these areas an important part of the battle. Battles are just like other RTS games where you see your units and are able to place them in different formations. As a medieval style game, the units are pretty generic; there are footmen, pikemen, light and heavy cavalry, archers, longbowmen, etc. However, as a mythical game there are also magical creatures such as giants, druids, and other creatures from a race from the Deepwood, known as the Sidhe. In addition to having your army units, your fabled knights are also present on the battlefield with their unique skills that when activated provide advantages to your troops or damage the enemy. However, timing is key on the execution of these powers as it costs mana, which does not recharge during the battle unless the hero has a special skill or you have occupied a landmark that allows for recharging mana during combat. The only small problem that I noticed was that if you execute powers simultaneously, the game would lag for a few seconds, but despite that the special effects are marvelous and add an epic touch to battles. 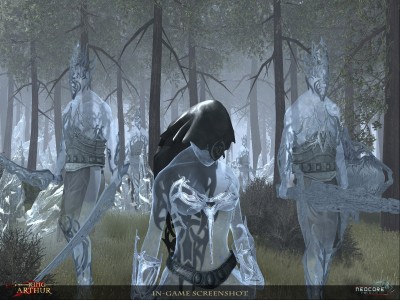 Battle mystical creatures at your own peril! 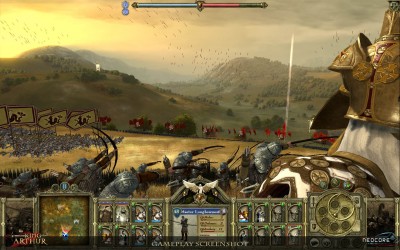 The topography of the landscape is simply exquisite

What gamers will also notice is the overall ambiance of King Arthur. The environment has a nice mystical feel and really makes the old legend come alive on the computer screen. The different battlefield maps and their topographical features are also worth noting as they allow you use terrain to your advantage against your enemies such as concealing troops in a forest for ambush or placing your archers on high ground for maximum effect. The music is also very appropriate for the time period. Utilizing a blend of Celtic and medieval melodies, the game’s medieval backdrop is complete. Although, transition between tracks are a little rough at some points, the tunes are very catchy.

Overall, King Arthur: The Role-playing Wargame does a great job in taking RTS features and fusing them with RPG elements to create a unique gaming experience. Strategy fans and fans of the Arthurian legend would not be disappointed as this game does not have as complicated of a learning curve as other RTS games such as the intimidating, in-depth game play of the Total War series. For those slightly more casual RTS gamers, this would be a nice buy.