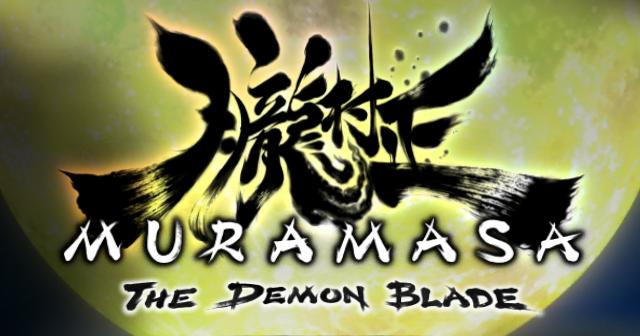 Muramasa: The Demon Blade is an action RPG developed by Vanillaware for the Wii with absolutely breathtaking visuals.  It cannot be stressed enough how much this game really is a piece of art.  The graphics are just outstanding in every possible aspect from the flame coming off of your demon blade as you carve through ninjas to the wind blowing through the wheat and trees as you hoof it from screen to screen.  The music too has great ambiance when you’re in towns, and picks up its pace to a Megaman style of hype on the bosses. 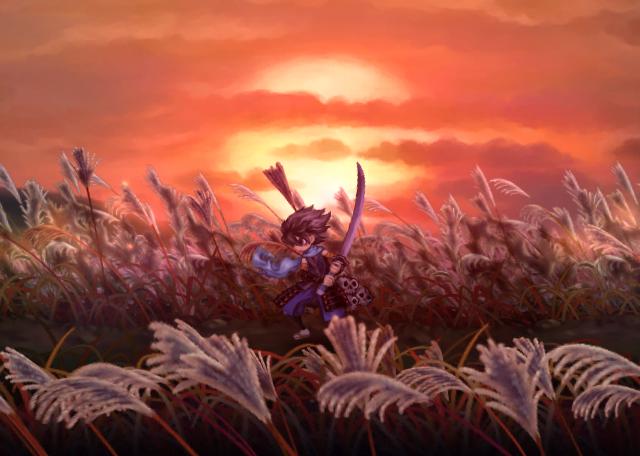 It looks even better in motion.

The game itself is rather simple in how it’s played.  It looks like a platformer, but you don’t do any real platforming.  You can have great fun jumping or double jumping around but there aren’t too many reasons for it outside of battle.  You have three blades to quick switch to at any given moment, and you basically have short blades (fast attacking) and long blades (slow attacking).  Your blades can break in battle based on how much damage you take or if you use the blade’s special ability (a 1 button press).  There’s actually a large variety of special abilities because there are so many swords.  The blade’s durability slowly regenerates on its own, or quickly when you defeat enemies (there are also items to use for durability).  In the actual combat of the game you have one button to slash with and it can be manipulated by your directional pad, and if you quick switch your weapon it does a full screen slash that you’ll become very familiar with.  There’s actually a decent amount of variation even though the controls are simple.  You can perform juggles by lifting an enemy into the air with an upwards slash and then either spam your attack button or hold it down to perform a slashing air dash up to three times.  Unfortunately, you’ll find yourself using the down + slash more than you would probably like because it’s just such a great attack.  That brings me to my next point.

Muramasa: the Demon Blade is rather repetitive when you’re fighting the standard enemies that are presented through random encounters.  The enemies, of course, look beautifully done aesthetically speaking.  And there is a great deal of variation in how the enemies attack and act, but you’ll end up using the exact same tactics on just about every set with the exception of a select few.  There is a certain type of ninja that drops bombs when you knock them down so you’ll have to commit to hit-and-run tactics unless you want to take a hit.  While this may seem like a bad thing…I never found myself becoming bored or too upset with the repetitive nature of the random encounters.  There’s something strangely satisfying about the combat.  The experience and leveling system may add to the satisfaction of the random encounters as well.

The bosses though…Oh Vanillaware you have nailed it here.  The bosses are the real meat of this game and are possibly the most visually pleasing aspect with the exception of Momohime’s hot springs visits.  The boss fights have this very Megaman style feel to it, in that, every boss has a pattern and can be defeated through a trial and error.  The animations will let you know what the boss is planning and you will be able to jump or run the hell away accordingly.  You can go at it with gusto and try to beat the bosses through pattern recognition and timing, or you can stock up on health items by grinding the random encounters a bit in combination with shopping. 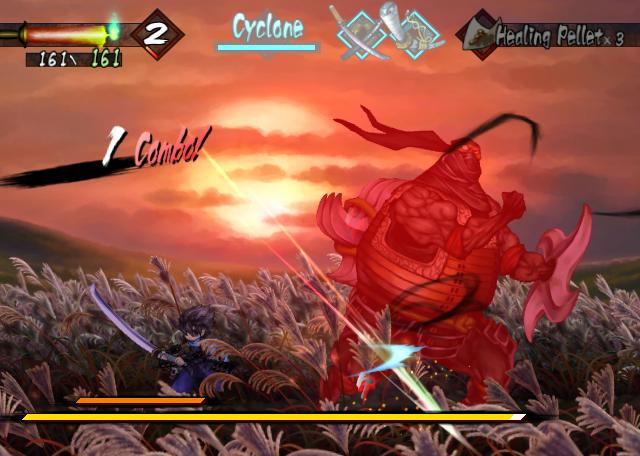 The item system in the game is fairly straightforward.  There are 108 swords in the game that are obtained in a sword tree (similar to a skill tree) that you forge.  You forge the swords with souls and spirit, or obtain them after defeating a boss.  The souls are found randomly as you traverse the landscape, or through killing enemies.  The spirit is obtained through eating food that you can cook, buy or find.  When you end up eating food that you cook it actually looks surprisingly tasty and has a visceral feel–I often ended up with an insatiable craving for sushi. 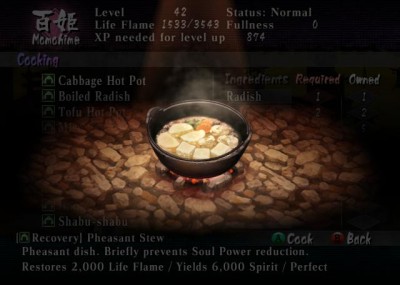 The story consists of Japanese folklore mixed in with the two protagonists Momohime and Kiksuke.  Momohime’s story is mostly about demon’s taking over her body in order to seek out demon blades to claim vengeance.  That is, the demon in her body wants vengeance and she is a vessel.  Kiksuke’s is…Well, a rather cliché, “I’ve lost my memory and I need to get it back”.  Everyone knows the most logical way to obtain your lost memory is to run around fighting ninjas and demons.  The dialogue is told through Japanese voice acting and is subbed in English.  One may find some great elements in the story if you’re familiar with Japanese folklore. 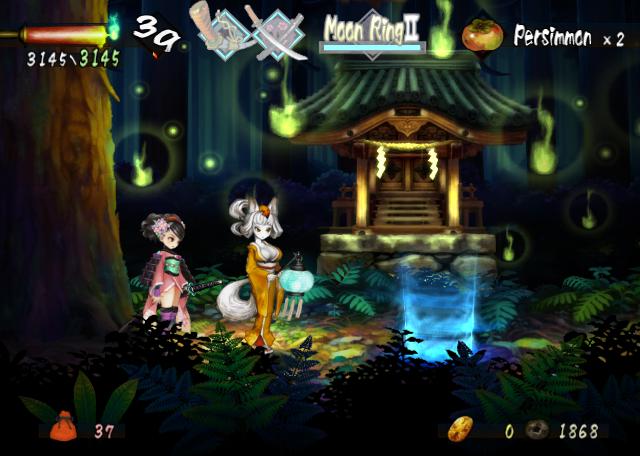 On the plus side the stories are both very different, and with that you have two separate games.  While the game play is similar with either character, the attack animations and special sword attacks from your weapons vary greatly.  The bosses are completely different depending on your character as well.  I managed to get through each one of their story lines on the Normal difficulty called “Shura” in about 7 hours.  I am not the “obsessive compulsive find everything in the game” type, but there’s challenge rooms for those types and they are surprisingly challenging at times by throwing 100’s of enemies at you.  The challenges really are an endurance test both in-game and on your fingers.  Finally, there’s also a hard mode where the enemies will kill you in about one hit…So, for you perfectionists out there—have a blast. 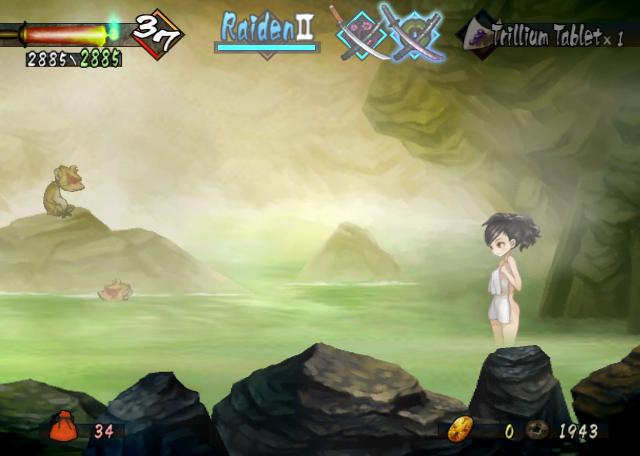 The towel never comes off, but I’m sure rule 34 has you covered.

Overall this game is really well made and you won’t regret spending the money if you’re an action RPG fan.  The best way I could describe this game in a truncated manner is a combination of Super Metroid/Castlevania (minus the platforming part) in combination with Secret of Mana.  You can expect about 15 hours of game play total through the stories on normal mode so it may be a rent for you.  However, if you’re the type that likes to find all the nooks and crannies of a game, or you like to just beat your head against a wall on the hardest difficulty then it’s definitely worth a purchase.

8 thoughts on “Muramasa: The Demon Blade”