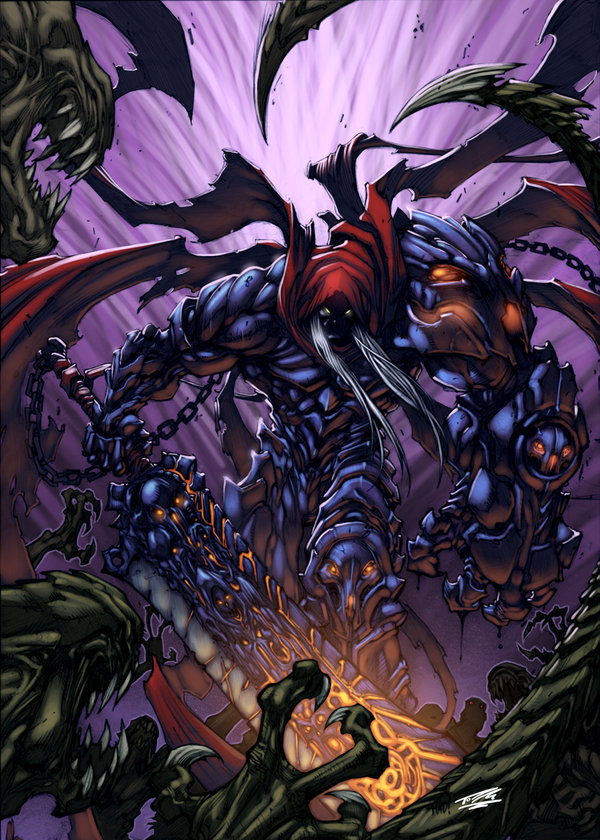 Like a sign-carting homeless man on the side of the freeway, video games have more than a flirtatious relationship with the end of the world. Post-apocalyptic landscapes are popular destinations for any game looking for a bit of an epic tinge, and Darksiders – the first release from Vigil Games- takes the rapture’s bombastic visuals to the hilt. Taking more than a few leaves from both Devil May Cry and The Legend of Zelda, is this mixed formula enough to make the End of the World new again, or is Darksiders incapable of rising to the quality of the sum of its parts?

War’s gotten screwed. The famous horseman was on staff to over-see the fragile balance between Heaven and Hell in between his preparations for the end of the world. But when the apocalypse is prematurely scheduled, War is blamed for the destruction of the planet, and sends himself down to figure out why everything went nuclear. Tied down by The Watcher, a spectral enforcer for War’s employers, War must fight his way through four unique dungeons and throngs of demons both humanoid and building-sized in order to get his answers. As deliriously epic as it’s comic book design, the plot’s biblical overture only carries interest through the first few hours, before the bland meat of the plot seeps in and quickly becomes routine. Sensible voice acting keeps the narrative from descending too much into cheesy chaos, but the performances rarely exceed one-sentence character archetypes; Mark Hamil’s Watcher limited to a re-purposed Joker voice. 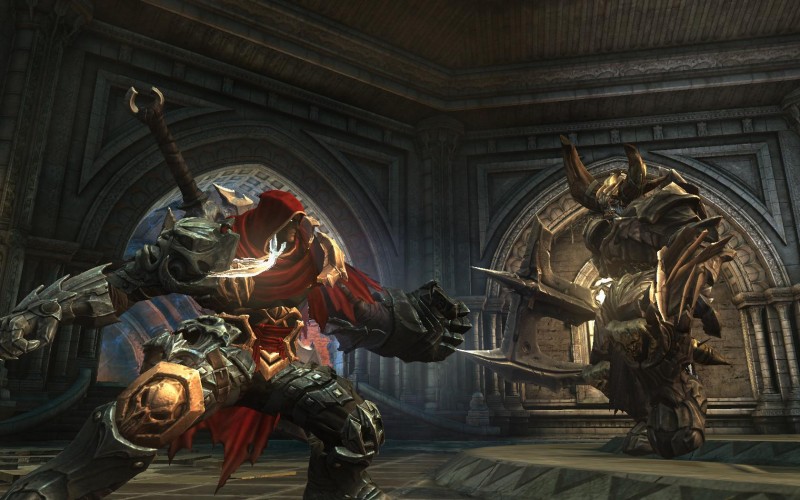 Combat is fun, but far from the smooth complexities of its forebears.

But mediocre plot trappings are a staple for modern action games, and luckily the core gameplay of Darksiders is stable enough that the softening story rarely remains on the mind of the player. Most of the time is spent hack-and-slashing through throngs of forces on both sides of the ethereal equation in both familiar bordered-off dungeon sections and open-world city streets littered with corpses that may or may not be waiting to maul War’s hide. Sporting a dense but at times obtuse combo system, the variety will keep most players invested through at least one playthrough, while the smarter ones will keep to War’s initial sword once they upgrade it a couple times to some standard combination attacks. The upgrade system is largely irrelevant, featuring only a dozen or so customizable features for War, none of which are required at any point in the game. Both minions and boss fights eventually follow a strict and recognizable pattern, but there is still fun to be had in the classic mob fight formula that’s carried the genre up till this point. But with one set of weapons obviously superior to the rest, and a lacking upgrade system, it feels almost like Darksiders will lead players by the nose into some seriously tedious moments.

The other side of the coin is the Zelda-inspired dungeon crawling routine, complete with mandatory item-tracking and a progressive chain of new implementations for existing devices. Each of the game’s four dungeons contains an item necessary to move forward in the game, many sporting uses both in and out of platforming (including the throwing-glaive we were promised back with Dark Sector.) Blissfully, traversing the game’s platforming segments are aided by a well-oiled hinge camera, and automatic lock-on prevents many of the headaches expected from the lesser attempts at the genre. Ignoring the seemingly pointless placement of some of the game’s platforming mechanics (random, sporadically placed orbs of air-blasting energy for instance,) the only real hang-up in Darksiders’ dungeoneering segments is somewhat muddy controls when it comes to a couple weapon’s specific functions. Many players will find themselves attempting to throw the glaive at specific environmental triggers at least half a dozen times before the game recognizes the simple action. Luckily the lock-on targeting of enemies runs much smoother. 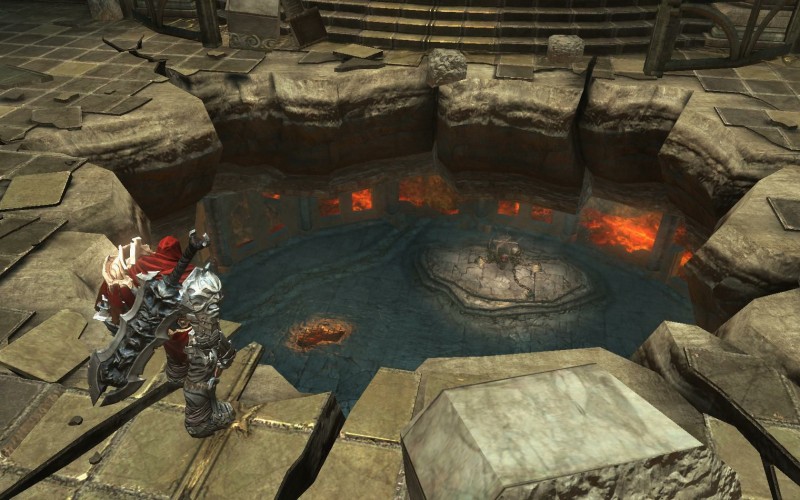 Dungeoneering is surprisingly fun, thanks to the camera controls.

Hand-in-hand with the exploration and platforming routine is puzzle-solving, herein consisting mostly of locked doors and movable items left a couple feet from their floor triggers. Most puzzles thrown your way are instantly recognizable, and lacking in Uncharted 2‘s use of scope and visual finesse, the simple puzzles just feel lazy and poorly handled. Often times figuring out a boss’ weakness will be more engaging, although equally as easy to figure out, the vast majority requiring some use of the device you just picked up in their dungeon. Combined, the explore-and-solve dungeons of Darksiders offer some fun platforming highlights and the rare intriguing conundrum, but mostly operate on a simple find-a-weapon-and-use-it structure that, while becoming flavorless very quickly, is spliced thin enough between combat segments to just barely avoid a hum-drum feeling. Traversing the hellish plains is still entertaining though, when the controls work.

Despite muddied combat and un-inspired puzzle-exploration,  many players will find dwelling on the game’s obvious blemishes difficult when the rest of the game sports a consistent and engrossing design. Baring the voice acting, Darksiders is a very pretty game on both the visual and audio fronts. Overseen by famed comic book artist Joe Madureira (“Uncanny X-Men”) and blended well into combat animations and level design, the look of the game hearkens to the Heavy Metal Olympian style of gigantic proportions and intricate attire that made the man famous, and it all works wonderfully throughout the game. Character models are drowned in detail and the bloated gravitas flows through every landscape sequence. Bosses are especially complex, and each level works the Rapture vibe to its desolate fullest. The game is also supported by an impressive soundtrack, which hits all the Gregorian chants and tense string-heavy instrumentals with more than anticipated gusto. Unfortunately, as bad as Bayonetta was on the PS3, the 360 version of Darksiders suffers from some major screen tearing and frame slow-down, at a consistent enough pace to hamper the gameplay experience.

War and his sadly routine companion, The Watcher

Darksiders is a game that takes from the best but will ultimately fade into the distance before the nostalgia wears off. Despite its gorgeously realized design and silky platforming, there are a lot of seemingly stupid errors made in its execution; not the least of which are a useless upgrade system and occasionally finicky control scheme. The core is still more than functional, and is more than worthy of a rental, but the fun of its hack-and-slash nature dries up shortly after the story’s introduction has been stretched to the point of elasticity. Horseback action and a top-down shooter-esque segment do enough to break up the routine enough for a playthrough, but without anything beyond the single campaign, there is very little motivation for a full purchase. When the end of the world comes, let’s hope its the Fallout version.