Continuity is defined as the state or quality of being continuous, a quality I’m sure we all could appreciate. In the game, Continuity, however the continuity itself has been scrambled, making simply traversing this strange little geometrical world a big challenge for our stick figure hero. 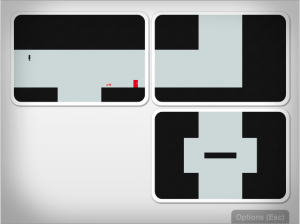 Every one of the game’s 32 levels has the same basic objective: collect the red key(s) and use it/them to open the red door and proceed to the next level. Things are never as simple as it would once seem, however. The strange world of Continuity is made up of several movable blocks, very much like a Chinese puzzle box. To navigate the level you have to connect the right blocks in the right positions. To do this you pause the game and move one of the blocks to the open space on the field. No matter how many blocks the level includes, there is always only one open space, move a block into the open space, and the space that block used to inhabit becomes the new open space.

Your character itself (stick figures don’t provide ample detail for sex discrimination) can move freely in 2D space, with the amazing ability to jump nearly 10 times its own height. In later levels this provides for some pretty decent and entertaining platforming to accompany the continuity-breaking puzzle-solving gameplay.

The game has a fairly minimalistic look to it. The 2D world has an easy on the eyes blue tinted white background, with sharp black geometry and landscape thrown into the mix as obstacles. It works for its purpose and doesn’t intrude or take away from the game in any way. Together with the mellow soundtrack and energetic sound effects, it provides for a surprisingly pleasant atmosphere. Surprising because who would have thought you could get such an atmosphere out of a game with a total of three colors and no graphical detail to speak of. 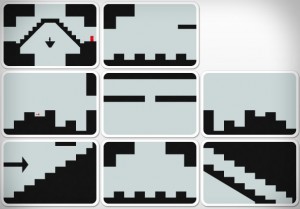 It’s a relatively short game. Though each level gets progressively harder and therefore longer, none of them are particularly frustrating as long as you learn to think in new ways. The game shouldn’t take longer than 30 minutes. However, it will be 30 very entertaining minutes, and you could always challenge yourself afterward by doing speed runs. I found this particularly interesting, since something as simple as moving the blocks to the right place gets challenging when you’re in a hurry.

And to top it all off, it’s FREE! Sounds like a cheap sales trick doesn’t it? Well even so, I highly urge you all to go to http://www.continuitygame.com/ and check it out. I’ve marked this as worth buying, because even as brilliant as we at Elder-Geek.com are, we didn’t foresee having a free game actually worth reviewing. But it would seem that the recent movement in indie gaming has proven us wrong. Besides, this game probably would be worth a few bucks if the creator did charge for it. GO TRY IT!