Patapon 2 is preceded by the huge success of the original Patapon. It’s a lot to live up to, especially with the Best Game of 2008 award and the switch into downloadable games for the PSP. After a long wait for the PSP to decide to connect to the internet, I put in my code for the game, downloaded, installed, and loaded it, and eagerly began to play.

I learned quickly that Patapon 2 is more of an expansion pack than an entirely new game with the same basic principles from before. One of the best features of the game is that you can use your memory from a saved Patapon game. This way you can start with all the stuff you worked so hard for in Patapon and use it toward building your army quicker. This makes it easier to beat the game, but I somehow messed that part up and started with my original saved name, but not my many items, JuJus, songs, or weapons.

The story picks up where the last one left off; the Patapons take a voyage across the ocean and wreck upon a new land. They journey back to Patapolis to find it in ruins. The goal of the game is to restore Patapolis and find out what happened. Many of the missions are parallel to the original Patapon. Most of the beasts are there to fight again, and some of the storyline, like Meden deciding to fight by herself and getting captured, happens again. You would think Meden would have gotten smarter in this version, but maybe this is the developers having their fun. You also have the opportunity to fight far more beasts than before. For instance, the first beast you fight is Dodonga, the dinosaur from Patapon . However, when it is foggy, you fight Majidonga, the second dinosaur from Patapon 1, and when it is snowing, you fight a new dinosaur, which is really hard. In addition, there are more levels and more challenges, which does not take up a huge amount of space on your mission landscape.

The most dominant new development is the new types of Patapons. You still have the original 6 types, but now there are 3 more: Robopons, Toripons, and Mahopons. These additions are great, especially the Mahopons, which can rain down fire and brimstone  if upgraded enough. Some of the original types were more disappointing this time around. Megapons, which I loved so much before, are far weaker, so I just stopped using them after awhile. You also can evolve your warriors in a more complicated web of evolution. This is a pro and a con because although I like having 15 different phases, you need far more items to get the new Patapon. However, unlike in the first installment, you don’t have to kill the Patapon to evolve him. 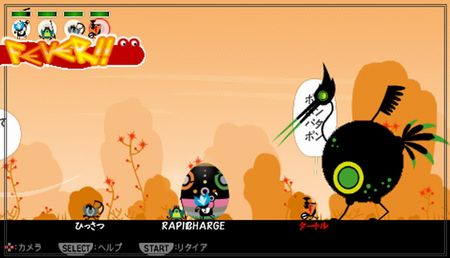 Even with all these changes, the most noticeable change is the Hero Mode. Near the beginning of the game, you rescue a hero Patapon with an attitude problem, who ends up joining you. In my opinion, it is easier to reach FEVER in this version, but after FEVER you reach the Hero Mode, which turns the hero from a regular warrior into a super warrior, who has different special attacks depending on the type of warrior you choose to be. You can change him as much as you want. If you select a Tatepon, during Hero Mode he puts a shield in front of all of your troops, so no injuries are sustained at all as long as you remain in Hero Mode. Other special attacks include giant, powerful spears, juggernaut-style charges, and a rain of fire and brimstone from above. “But we could beat levels just fine in the old Patapon without a powerful hero!” the masses cry out. Yes, but now the levels are a lot harder and need the hero to beat them. Some of the levels that we played in the old Patapon are also in the new Patapon, but are far harder in this version (i.e. Cioking the %&@#ing Crab). So the difficulty is adjusted for the increase in power.

The hero feature allows gamers to change up the attacks and pay more attention to keeping the beat. Although it is much easier to keep the FEVER up, Hero Mode takes some concentration. As great as the hero is, movement is frustrating.  The Hero can be reborn if it is struck down, but if it is killed by being desiccated or eaten, it doesn’t come back. Another instance where movement difficulty occurs is when you are under attack and punch in the Retreat song, your warriors run away except for the hero. He stays right where he is and gets killed. I advise that if you are well into Hero Mode don’t try to retreat or do not be in it at all because the hero will literally be a hero and not run away. 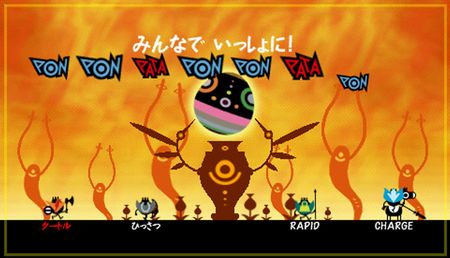 Patapon 2 also features a greater variety of stuff.  There are the familiar things such as all the old possessions, like the rocks, vegetables, plants, etc, but now bosses drop fangs, bones, hides, juices, seeds, and other random things. There are also 2 new minigames. However, one of them, the dancing game, only gives you a tiny bit of KaChing, and the other gives you juices. The juice minigame takes some getting used to, but I honestly feel that the dancing game is a waste of time. Go hunting if you want KaChing; you will get more and it is easier. Additionally, there are a lot of new creatures to hunt.

One last new feature is the Patagate Portal. You enter it with your hero and play with other heroes, who are either unlocked through gameplay or connected to other PSP’s. Here you go through old levels you have already beaten, but in a time limit, using only 4 heroes and unlock new heroes and masks after beating it. It is insanely difficult to keep Hero Mode in the Patagate. Plus, the other heroes work as their own “master” and don’t always follow what you do, but the treasures you get at the end are worth it.

If you liked Patapon , Patapon 2 is a logical and paramount addition to your PSP gaming repertoire. It has all of the great things from the first game with so many new things to do. I have beaten the game, but I have not even played through half of the content that is available. And even after the epilogue, if you play the last level enough times, you unlock even more levels. So yes, this game is worth playing, buying, sharing, etc, and has helped me integrate into the downloadable game code way of gaming. Even if you don’t want to shell out the $20 for the game, find a friend, because this game has the ability to be shared with other PSP’s. Besides, it’s hard to find a place that rents PSP games, especially since this one is a download. Until then, I will be dancing the Don Chaka Ballad of 1999 and waiting for others to enter the Patagate with me. 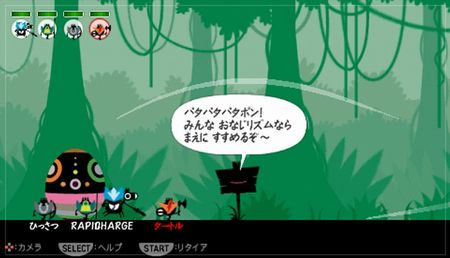