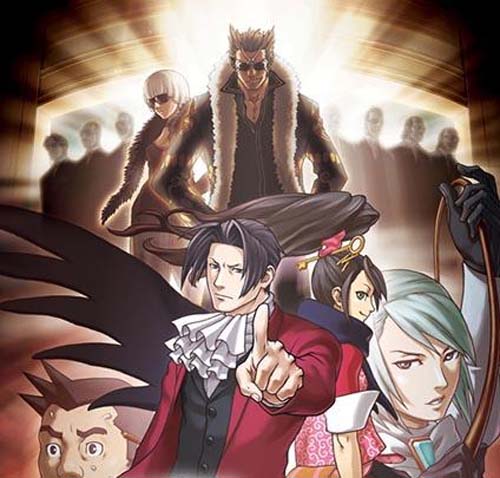 Over time the Ace Attorney series has risen from a small set of ports from Japanese Gameboy Advance titles to a series popular enough to merit a spinoff. This spinoff is Ace Attorney Investigations and this particular game features everyone’s favorite prosecutor: Miles Edgeworth. Like the other games, players have to use their brains instead of their brawn to overcome the odds and uncover the truth behind various cases. The question is, is Ace Attorney Investigations worth playing or not? I can uncover that truth, with evidence! 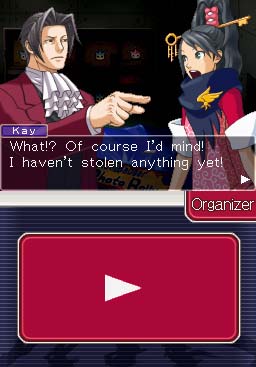 Edgeworth is a cocky jerk, but in an awesome way

What separates this game from the others in the Ace Attorney series is the almost complete lack of a courtroom. When they say “investigations,” they mean it. Instead of being confined to a courtroom, Edgeworth investigates the crime scenes firsthand and proves who did what right then and there. Throughout the five cases in the game, Edgeworth and his various partners are trying to track down the leader of a large smuggling ring. With the exception of a small lull in the middle, the story is very interesting and holds many surprises. I missed being in the courtroom a little, but being stuck in there would take the “investigation” out of Ace Attorney Investigations. 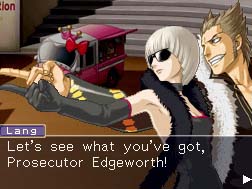 Along with Edgeworth, many other characters appear in this game. There are brand new ones along with many characters from the previous Ace Attorney titles. All of them have their own personality and it is always fun to talk to them and see their various reactions.

Most of Ace Attorney Investigations is shown through two-dimensional, anime style graphics. Each character is unique and detailed, and has their own set of comical and over exaggerated reactions. The times when the game looks more like a game and less like a cartoon are during the investigation scenes. The sprites used for the characters are nothing spectacular, but the background areas and various settings are very detailed and make every crime scene feel like a completely new experience.

Along with the graphics, the audio in Ace Attorney Investigations really helps bring the game to life. The music compliments the various moods of the game well. There is fast, high octane music when Edgeworth is uncovering something important, and calm music that almost fades into the background when there isn’t much going on. Along with the music, there are the various outbursts like “Objection!” and “Take that!” which are practically trademarks of the series. Without those it just wouldn’t be an Ace Attorney game.

The way you play Ace Attorney Investigations is very similar to the rest of the games in the series. Players will constantly switch from investigating crime scenes for evidence to hearing peoples’ testimonies and pointing out contradictions to get closer to the truth. Since you are playing as a prosecutor this time, I was hoping to see a little change in how things worked during cases, but Edgeworth always seemed to be either playing detective, or on the defense trying to prove that the falsely accused did not commit the various crimes.

Usually at the start of a case there will be a back story before you dive into investigations. There is a lot of talking throughout the entire game, so be prepared to read. After the introduction players will have to find evidence. One unique feature of Ace Attorney Investigations is the ability to walk around freely. In the previous games you just had a screenshot of one of the crime scenes where you pointed at various objects to investigate them. However, in this game you get to freely explore the crime scene as well as entire rooms related to the crime how you see fit. 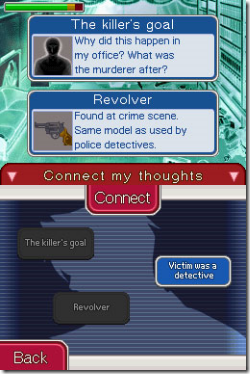 The other part of the game play is talking to people and listening to their testimonies. Like the previous games, this is the part where players present evidence to the contradictory part of a testimony with a loud “Objection!” This part is usually more exciting than the investigations since you are engaging other characters in a battle of wits.

Last, but not least, there is logic. This is another new feature and a prosecutor’s best friend.  Throughout each case, Edgeworth will receive new pieces of logic that he has to piece together in his head. This is an interesting new feature, but I found myself constantly jumping ahead of Edgeworth in logical thinking and placing pieces together that were not meant to be put together without another piece of logic.

While all of these pieces of game play form a rather solid puzzle, there are times when you will jump ahead too far and neglect to solve each step of the case which results in a stand still until you resolve a minor detail that is usually common sense. There are also times when pieces of evidence that seem to have nothing to do with the matter at hand really have everything to do with it because of some crazy idea Edgeworth has. When either of these two scenarios happen, it usually comes down to picking and choosing evidence until you get it right, which bogs the game down, defeats the purpose of this type of game and does not make you feel like an ace attorney at all. 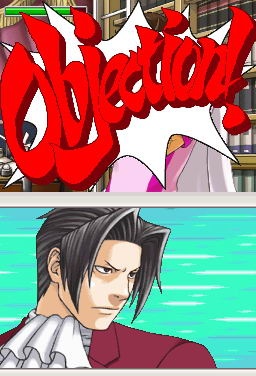 Fans of the Ace Attorney series will most likely buy this one for their collection, but a rental will suffice for everyone else interested in this game. Even though the story is strong, the graphics and sound are well put together, and the game play is solid for the most part, there is nothing to do after you finish the five cases. This game is definitely worth your time, but overall the game is of average length and since you will figure everything out in the first run through, there really is not much of a reason to go back to it.