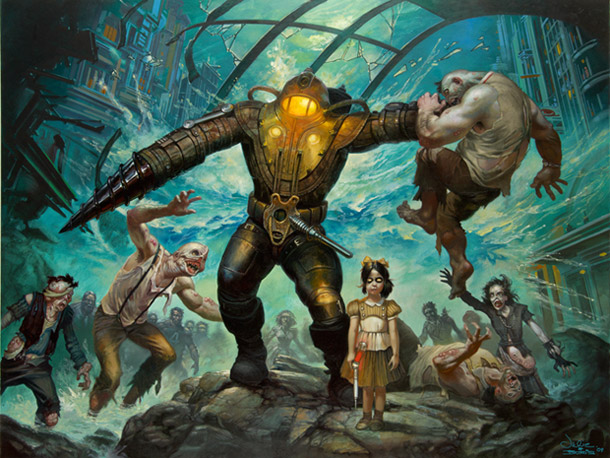 Yes, it is time once again to dive into the bleak depths and return to the Libertarian’s wet dream that is Rapture. Bioshock 2 comes two years after the original became a surprise critical and financial hit, taking place ten years after the fall of Andrew Ryan’s objectivist version of the underwater city. With a new domineering philosopher exercising their control over the genetically enhanced citizens, and a new suite of plasmid-powered multiplayer modes, Bioshock 2 tries hard to enhance the art deco pedigree that made its prequel one of the most memorable games of this generation. Does it succeed, or has this franchise taken on too much water?

Forgoing a grandiose opening for a more immediate one, Bioshock 2 shoves you into the diving boots of Delta, the original prototype Big Daddy who has returned to the submarine dystopia after over a decade of absence. The reins of Rapture have been taken up by Sofia Lamb, and although her altruistic philosophy couldn’t be more different from Ryan’s, the leaky city still suffers from an insane populace and an anarchic rule of law. Delta’s main mission is the retrieval of what was once his little sister who, like many of the original demented child-creatures, have grown into the new arch-villains known as the Big Sisters, who sport the power of the Big Daddies in a sleeker, plasmid-capable package.

The twisted tale pans out much the same way as in the first game: the majority of the political ins and outs revealed through optional audio diaries scattered across the world. Exposition also comes in the form of conversations with Rapture’s less insane inhabitants like Tenenbaum, as well as some scripted flashback sequences triggered by in-game scripted encounters. While the script remains polished to maintain interest in addition to staying true to the world’s retro-tech future, the voice acting has taken a noticeable dip in quality since 2007, with some over-enthused accents and bland deliveries popping up consistently through gameplay. Depending on your knowledge of altruism and philosophy in general, Sofia Lamb will noticeably lack the consistency of vision that Ryan so venomously oozed, some of her actions almost contradicting her proposed vision for the city. The story as a whole is bookended with steady pacing, the middle 3 hours suffering from some tedious execution, and it all builds to a tumultuous, if slightly nonsensical endgame.

But you don’t become a Big Daddy to sit around story circle, and Bioshock 2 manages to fully surpass its predecessor in nearly every aspect of gameplay. Delta is equipped with the expected drill and rivet gun common to the iconic monster class, but can also obtain a variety of guns capable of both firing and whacking splicers into delicious gooey bits. The ability to utilize both plasmids and weaponry simultaneously is an obvious but nonetheless well-implemented advancement in the combat, and the additional gene tonics allow for even more ways to elementally disturb the flow of your enemy’s day. But this new ease of combat is balanced with sharper enemy AI and a few new classes of splicers to challenge your survival skills, leaving the game with just as much frustrating-then-gratifying grit as before. The ability to remotely hack switches and turrets is probably the most satisfying change most gamers will gravitate towards. The mini-game required to confiscate mechanical allegiance is streamlined (plus) and in-game (negative), keeping the flow of battle constant, if not slightly annoying. The biggest aggravation, the ear-blistering tunes screeched by ammunition and item machines, have been mercifully destroyed.

A few key gameplay complaints arise after only an hour of play, however, and unfortunately, they inhabit the core of the new game mechanics. The threat of sporadic Big Sister

encounters was an outright falsity, their appearances in tune with the flow of the action to the point of blind predictability. It’s not a major issue, as a trading-blows session with a Big Sis is still one of the game’s highlights, but those expecting a constant mega-threat will be able to breathe a disappointing sigh of relief. But the major blemish on Bioshock 2 is the Little-Sister-Corpse-Defense game. At many, many, many times during gameplay, you will be required to defend your little sister dujour as she ever so slowly syringes the genetic currency known as Adam from various corpses, causing a flood of splicers to flock to your location and attempt to disrupt the process. While some smart usage of trap rivets and hacked turrets can expedite the task, the game forces you far too often into this routine, and it gets old after only the first few times.

But when one says Bioshock, one means art design. The 50s-throwback décor and creepy graffiti allusions gave the series a pedigree for utmost atmosphere and tension. It’s a shame then, that Bioshock 2’s art design feels much less fluid – even while containing much more fluid – and dynamic. Structures and layouts will strike as far too similar to ones you encountered hours before, and all of the subtle nuances to lighting and art direction have been shoved to the front window in efforts to appear as cool in trailers as possible. There is a decided lack of mystique this time around, the experience feeling more of an underwhelming emulation of Rapture than the actual city. Even taking into account the lack of antagonist gravitas, there is something sorely missing on this voyage. Except for the startlingly tranquil romps in the Adam-enhanced foliage outside the city, which provide well structured, if inactive, breaks in conflict. 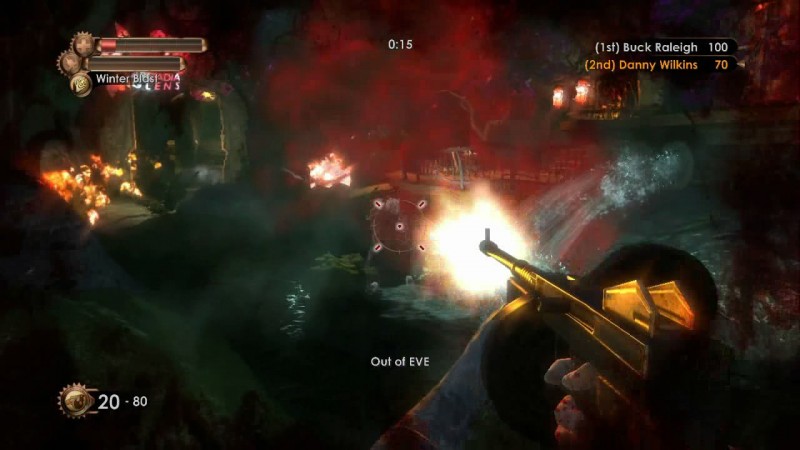 It’s odd then, that the art design of the multiplayer feels much more inclined with the Bioshock motif. Sporting the more varied locales of previously explored locales like Fort Frolic, the multiplayer suite sets you in a prequel to both Delta and Jack’s adventures, as a not-quite-yet insane splicer under contract with Sinclair Solutions in a battle royale testing camp for its various new tonics and plasmids. Sporting a surprisingly realized storyline, progression through the game’s 5 modes (all Rapture-fied takes on classic tropes like ‘Capture the Flag’ and ‘Free for All’) will bequeath the full story of the city’s civil war, and is a decent motivator for keeping with the suite long after the gameplay has gone routine. Plasmid use and a single Big Daddy suit upgrade allow for a few modes to go beyond the average expectations, but nothing will keep the disc spinning after the first dozen matches have been scored.

Bioshock 2 suffers from a pestering case of the sophomore slump. The System Shock-inherited genes for story and design are noticeably dulled, and the game’s middle third stutters all too close to the dark waters of tedium and repetition. Multiplayer has been successfully integrated into the fold, games of plasmid-on-plasmid action engaging beyond the norm, if not surfacing as a contender to any of the greats. A few poor gameplay design focuses will aggravate more players than it will appease, and those looking to return to an equal level of intrigue and atmosphere will find the experience all too shallow. To the game’s credit its pedigree still puts it at a plateau above many popular shooters, but there’s not much here to satisfy past the first few dives underwater.