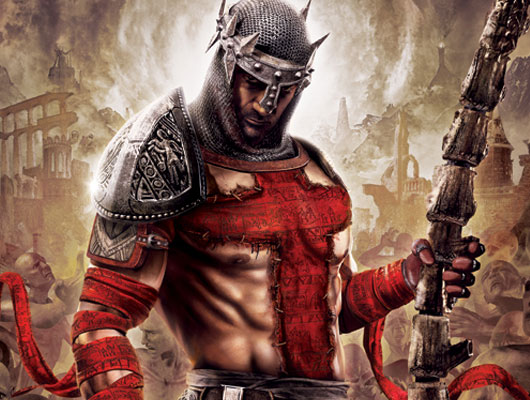 Descending into Dante’s Inferno, you might expect a passable God of War clone and nothing more.  But you’d be pleasantly surprised because, turns out, it’s a hell of a lot more.  Because about 10 hours after starting your quest, you’ll have completed an amazing odyssey with finely tuned gameplay and a presentation that will definitely give next month’s God of War III a run for its money.

You play the titular Dante, a former crusader who ventures into the depths of Hell when his beloved, Beatrice, is taken by Lucifer.  The writing and storyline is excellent, but considering the source material of Dante Alighieri’s epic poem, Visceral Games would’ve had to try pretty hard to mess it up.  It is by no means a replacement of the original text, but those who have studied it will appreciate the game’s strict adherence to Dante’s map of Hell and the occasional dropping of names of creatures and places like Acheron and Minos.  Virgil also makes an appearance, providing information on each of the Circles and the Inferno in general. 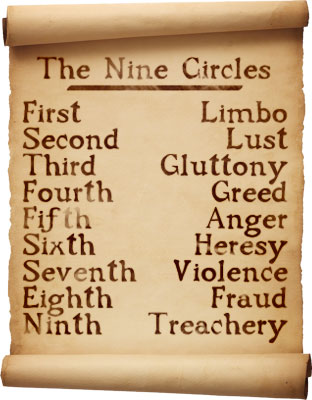 Just in case you ever find yourself damned.

The plot is delivered with in-game cutscenes, rendered cinematics, and some unique animation.  Pacing is excellent all around and you’ll want to keep on playing just to find out what happens next.  There’s a requisite twist at the end, of course, and an obvious promise of a sequel, but that’s to be expected.  Considering that Dante’s original Divine Comedy chronicles a man’s journey through Hell, Purgatory, and Heaven, what we seem to have here is a very promising start to a trilogy.

In terms of gameplay, the similarities to God of War are as obvious as the nose on your face.  The game makes few attempts to stray from the established formula, but you can’t exactly blame the developers.  Most of the action is your standard hack & slashery with a primary and secondary weapon and fighting segments are interspersed with platforming and puzzles.  The latter can be hit-or-miss, but the combat is always satisfying, especially when you pull your analog sticks in opposite directions to rip a demon in half.

Accompanying the derivative and sometimes repetitive gameplay is a two-pronged progression system with both ‘Holy’ and ‘Unholy’ skills and upgrades. Absolving or punishing sinners gives you holy and unholy experience points, respectively, but the chances of you having to make a choice are slim to none.  This allows you to dole out justice based on your own beliefs rather than what kind of experience you might earn.

In addition to being in charge of the fates of the minions and demons of the underworld, you’ll come across several dozen ‘big’ sinners including Pontius Pilate, Hecuba, and many more.  Each will be found in the appropriate circle of Hell.  The only real point of choosing punishment over absolution is to help you level up the numerous holy and unholy artifacts you’ll find.  These artifacts grant you boosts in strength and other abilities, but they’re only necessary towards the later part of the game on regular or harder difficulties. 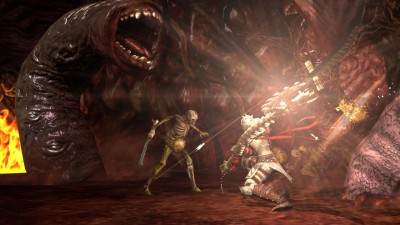 The Grim Reaper's scythe is your only melee weapon, but it gets the job done.

The area in which the game shines is undoubtedly its art design.  Enemies range from the horrifying to the disgusting including hordes of unbaptized infants with razor claws in Limbo to succubii with tentacle-like genitalia in the Tower of Lust.  For every standard horned demon you’ll find an ingenious manifestation of sin that will make your skin crawl.  The environments change dramatically in each circle and that’s the main reason to keep on playing.  From the Second Circle abound with phallic and sexual imagery to the cold and icy depths of the Ninth Circle, no two areas look alike.  The art style is best described as a combination of H.R. Giger and Salvador Dalí.

The sound design is equally superb with the Second Circle echoing with perverted screams of pleasure and pain and the Third filled with the sounds of a million souls vomiting to death.  It’s quite gruesome, needless to say.  Rounding off the excellent presentation is a haunting score by Garry Schyman, the composer behind Bioshock and its sequel.

The bottom line is that Dante’s Inferno isn’t just some run-of-the-mill God of War ripoff.  It’s a fantastic game that poses a real threat to God of War III.  Maybe not in terms of sales, but Kratos definitely has his work cut out for him.