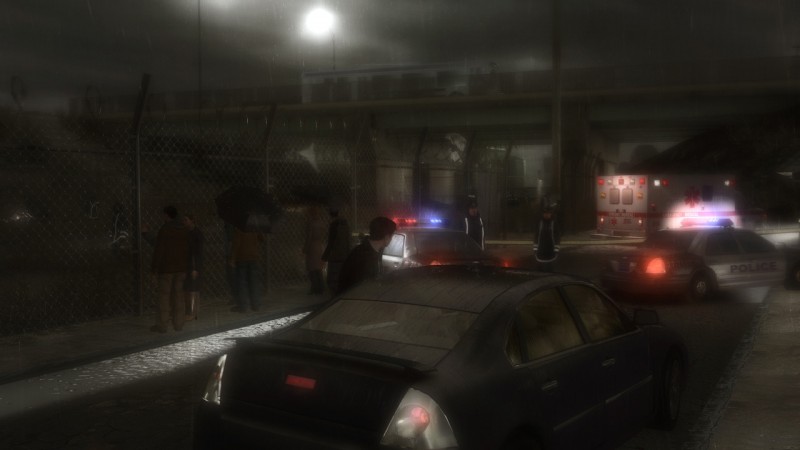 It’s taken over four years, but Elder-Geek.com’s most anticipated game of the year is finally about to hit store shelves and make itself known. Sporting a gameplay interface that has the quicktime-event bile rising in many gamer’s throats; Quantic Dream’s interactive murder mystery has a lot to lose. Is it the happy mesh of mediums it claims to be, or is this just a case file lost in translation? Murder has a way of bringing people together. Rather than opting for a singular protagonist, the tale of the Origami Killer is told through the eyes of four very different people. Veteran private eye Scott Shelby, investigative reporter Madison Paige, police detective Norman Jayden, and architect Ethan Mars, who opens the game’s prologue tutorial before becoming the first victim in the game’s shift in mood.

Each character has a serious physical or emotional flaw, a factor that serves as the player’s initial insight into their personality, as well as an occasional character-centric bout of gameplay. The video game noir weaves in and out between the four protagonists’ individual searches for answers, each beginning with unrelated motives before colliding with the other character’s in dramatic and often unexpected ways. With the plot being so front and center in the Heavy Rain experience, it’s a good thing that it keeps an intense pace and manages to hit some very powerful emotional notes. The writing, for the most part, keeps the characters human and the world tangible, with the occasional oddly verbed sentence throwing a wrench into an otherwise well structured scene.

Despite this generation offering gigantic leaps forth in interactive storytelling, most players will find themselves more aware of Heavy Rain’s cinematography than in almost any other game played in this or any other console lifetime. When relinquishing control of the camera for fight or other cut-scenes, angles dip and flow with mellow expertise. Even when performing an action or walking around in the environment, the player can shift through multiple angles, each boasting the same level of sharp composition. The cinematic inspirations are constant and apparent, the game obviously taking place in a David Fincher inspired Philadelphia and harboring some major love for masters like Hitchcock. Most lines are delivered with convincing ethos, but the gap between the actors and the Americans they are playing is a shaky one, odd pronunciations popping up with nagging frequency. While the delivery is rarely off key, the emphasis applied often hits the wrong note.

But be warned, if you were unsure if this whodunit was for you or not, Heavy Rain makes no effort to try and appease any but it’s intended demographic. Sporting a boring introduction that stretches into the multiple hour territory, the advertised flair and drama of the game takes a while to muster up the gravitas. While making storytelling sense, it doesn’t exactly make for thrilling interactivity. The story also contains a major, festering plot hole past the second act that could seriously impede the otherwise stellar climax. Make no mistake; Heavy Rain does not try to be what it’s not. 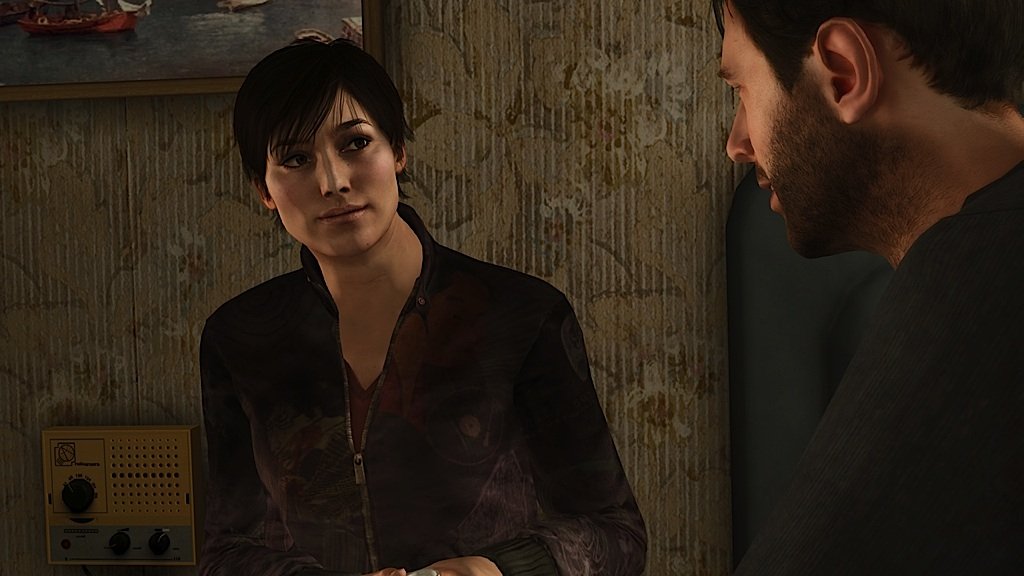 Thankfully, what Heavy Rain contains is an impressive, and at times stunning, presentation. The aforementioned cinematic angles highlight exceptional lighting design, which in turn emphasizes each segment’s immaculate attention to background detail: apartments sport convincing knick-knack clutter, junkyards feel appropriately greasy. Most of this detail doesn’t hold up quite as well under tight focus, but walking a character through any of the game’s segmented locations bodes a nigh photo-realistic look when taken at a glance.

Unfortunately, what was mind-boggling  facial animation throughout the game’s production has recently been outpaced by releases just months before, and the occasional oddly stretched lip or desynchronized reaction doesn’t help. Minute movements fluctuate between believable and questionable on a more dramatic scale, but for the breadth of the project, it’s hard not to appreciate the depth and degree of the design work on display nearly every second. The sound design fares much more consistent and tangible, everything from jingling door bells to asthma inhalers operating with all the audio minutia of its real-life counterpart. An astonishing orchestral soundtrack quickly becomes one of the presentation’s greatest strengths, easily beating out all but the grandest sounds available in games or films.

But the most obvious question remains: how does it play? The core movement of the character is as clunky as the game’s opening, but sadly doesn’t share its eventual smoothing out. Players don’t so much move the four protagonists through a chapter as guide them, holding a shoulder button to walk forward and controlling the direction with the analog stick. Gamers will get used to it, but never quite like the setup. Occasionally, prompts will pop up in the environment to interact with objects, and the flow between selecting and operating the prompt and performing the action is smooth. Holding another shoulder button pops up the character’s thoughts, the indulgence of which is both optional and embarrassingly engrossing. The interface of Heavy Rain is well integrated and unobtrusive, prompts floating calmly about the levels, somehow finding the middle ground between ever-present and inconspicuous that developers have been searching for since the first H.U.D. The smoothness is epitomized in occasional ventures into Norman Jayden’s future-tech added Reality Interface, where accumulated data and clues flow about in interactive streams; easily some of the most visually arresting moments of the young year. 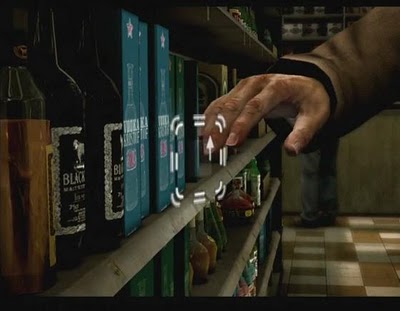 Heavy Rain operates all in real-time, the quick-time prompts coming in several flavors; simple, timed, or rapid presses, analog flicks, and multiple-button holding. What separates the

final product from its derisive “Dragon’s Lair 2.0” branding is how dynamic the events play out on screen. Most prompts correspond with the direction or perceived effort involved in the on-screen action. The screen rarely remains static, employing quaint zooming or constant cuts and angle shifts depending on the situation. The effect is sadly two fold; the designers making the understandable mistake in presenting the more angst-ridden prompts shake and shudder to emotionally correspond, occasionally making them difficult to read mid-battle. The more sophisticated prompts will stretch your fingers beyond the controller’s comfort zone, but there is never a trial-and-error sense to the events. The promised ebb and flow is always in full effect, missing one press won’t damn the character to a game over, and players will be surprised with how much more intense the experience is without the constant annoyance of a re-loading screen looming overhead. They weren’t lying though. No game over screen means dead protagonists stay dead, their future segments locked for the rest of the playthrough. There are few, if any, single-player only games with as much claim to replay value for it, though. 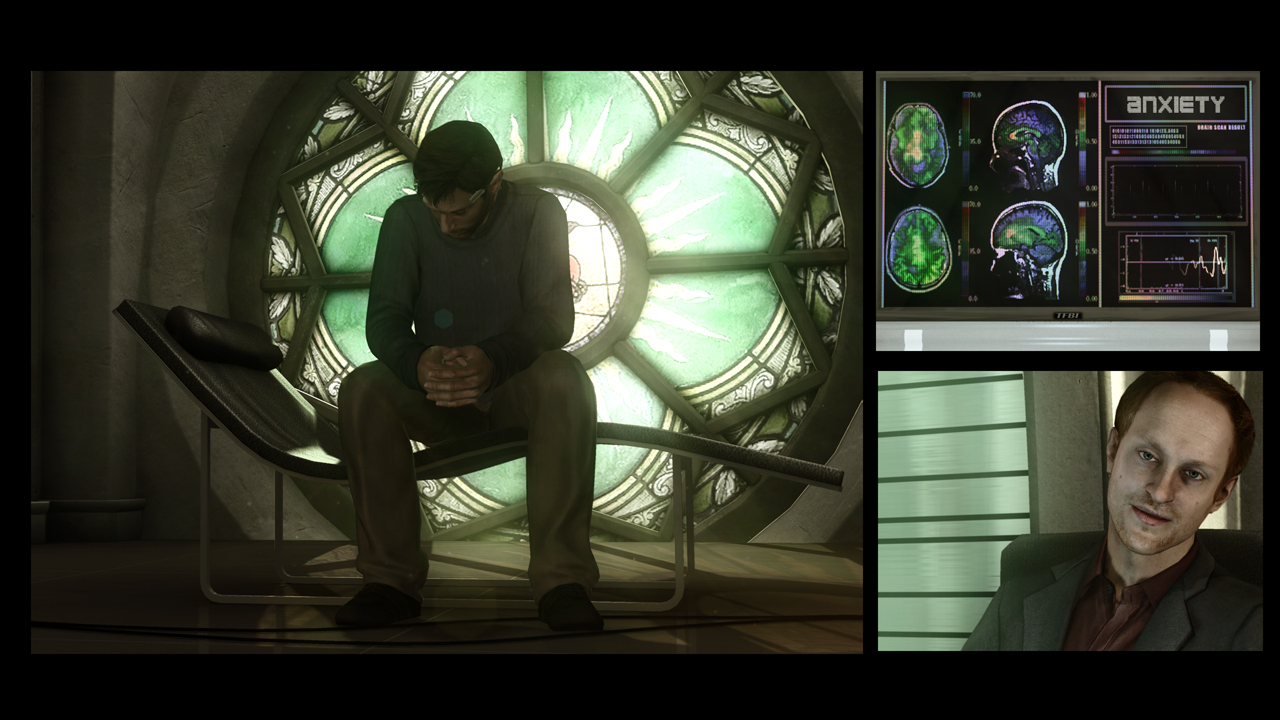 Love it or flame it, there is nothing like Heavy Rain. The murder mystery sports one of the most emotionally charged and complex stories ever seen in the medium, and manages to keep pace and wrap it all up with sophistication to spare, plot-hole scar forgiving. The magnifying glass reveals some slight blemishes in the graphical presentation, but for the conceivable future, the atmosphere and layout of the game’s chapters are what all detailed design will be measured against. A revisionary edit and a bit more attention paid to the English barrier would have smoothed out the presentation to perfection, and character movement is needlessly frustrating, but Quantic Dream has evolved the button prompt mechanic to an art form, and takes the player on an involved and addictive film noir tale to boot. It is what it is and its proud of it, and given the chance, it’ll invade your senses and become impossible to put down.