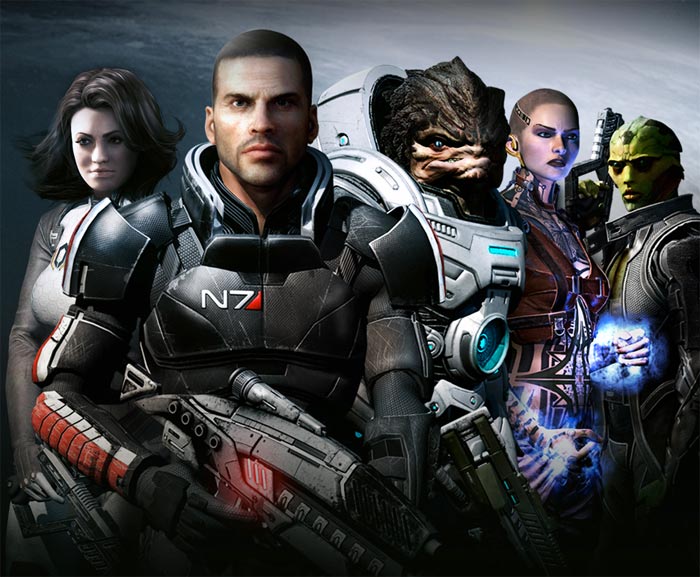 Love ‘em or hate ‘em, BioWare is famous for their story heavy RPGs full of conversations, detail and moral choices. Combine this with a solid third person shooter style of play, some RPG elements and a sci-fi setting and you have Mass Effect. This style of game play returns in Mass Effect 2, the sequel to BioWare’s first critically acclaimed installment in this developing series. The only difference is almost everything in Mass Effect 2 is a huge improvement over its predecessor. 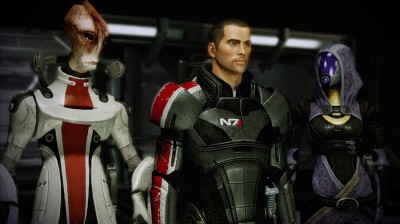 Shepard is always hanging with a diverse crowd.

Commander Shepard returns to take on yet another impossible mission. Hired by the pro-humanity extremist group, Cerberus, Shepard is tasked to find out why a new group of aliens is kidnapping humans by the thousands and stop them. However, in true Shepard fashion he first has to recruit a rag tag team of misfits to help him on this so called “suicide mission.” There are a few twists to keep you on your toes and there is almost never a dull moment.

What really makes this story great isn’t the over arching storyline, but the huge attention to detail BioWare gives to the Mass Effect universe. Every character that joins Shepard’s squad has their own story as well as their own specific mission. Even the characters Shepard only briefly interacts with and the planets the team only looks at from orbit have their own back-stories. This attention to detail is what makes the Mass Effect universe a living, breathing entity instead of just a place to put the action. 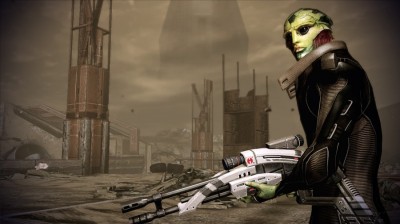 When I first started playing Mass Effect 2 I was blown away by how great it looked. The characters and environments are all very detailed and early on in the game I found myself walking around Omega and the Citadel just looking at everything. All of the civilized and populated areas are sleek and shiny while all the run down locales look dirty and broken, but still look like they’re a part of a sci-fi universe. On rare occasions I noticed when Shepard was talking to someone he would disappear for a few lines only to reappear a little later like nothing has happened. This happened with a couple other characters as well. There were also a couple instances of slowdown during cut scenes. Other than that, the graphics and overall design of this game are nearly flawless.

Like the graphics, the audio in Mass Effect 2 is fantastic. The soundtrack is made up of a variety of sci-fi themed music depending on where you are. Whether you’re in a nightclub listening to the pounding bass, in an epic fight scene with fast paced, high octane music, or just walking around a city listening to the ambience, the music and sound effects fit the game well and are enjoyable to listen to. 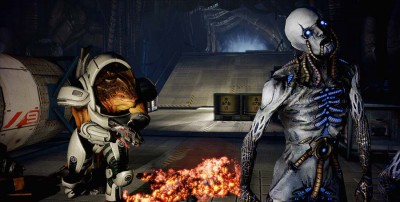 What really makes the audio stand out is the voice acting. Actors from the first game like Mark Meer (Shepard), and Seth Green (Joker) return and newcomers like actor, Martin Sheen, who voices the mysterious leader of Cerberus, lend their talents. The script is extensive with all of the conversation topics available, and every line I came across in the game was well done and believable.

If you played the first Mass Effect, the game play will be mostly familiar to you. Players are still thrown into high action shooting scenes where, depending on their class, they can gun down enemies or use biotic and tech powers to take them down. However, things such as managing weapons, armor and side quests have been changed and streamlined.

First off, the shooting works like any competent third person shooter. The cover system is easy (and quite useful), and at any point during combat you can pause the game to bring up the rotary wheel similar to the one used in Dragon Age: Origins. This lets you switch out your guns as well as plan biotic and tech attacks for you and your team members to use against your enemies. There are times when the AI stands out in the open and does absolutely nothing, but luckily it does not happen too often and it is easy enough to tell them to get to cover and continue fighting. 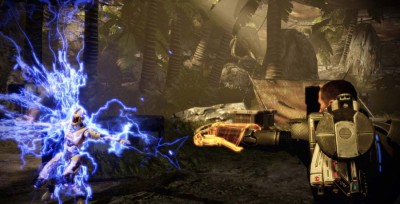 The main difference in the gunplay mechanics from the first Mass Effect is the use of ammunition instead of the guns just overheating when they are used too much. The limited supply of ammo gives you more incentive you use Shepard’s and his teammates’ biotic and tech powers instead of just shooting everything until you’re the only thing left standing.

That being said, the biotic and tech powers in Mass Effect 2 are infinitely more useful than they were in its predecessor. Targeting enemies is easy and you can mix and match powers to use together to form strategies for battle. For example, one teammate can use biotics to pull an enemy out of cover, another teammate can use their tech ability to overload their shields, and Shepard can shoot them down all while they’re hanging helplessly in the air.

As far as equipment goes, you no longer have an inventory menu. Instead, the guns you gather throughout the game are only changeable in between missions and sometimes in the middle of a mission. The armor works in a similar way. Instead of managing everyone’s armor, you only have Shepard’s to worry about. Throughout the game you will pick up new pieces of armor like shoulder pads or chest plates which all have different power ups, and you can mix and match them to whatever fits your fighting style the best. This streamlines the tedious act of rummaging through your armor and weapons and gives the game a more realistic feel of only having what’s on your back as opposed to bringing your entire cargo hold with you on every little side mission.

Speaking of side missions, remember the Mako? If not, don’t worry about it because Shepard and his crew opt not to use it in this game. Instead, you fly around to different planets in the Normandy and scan them from orbit. When you find an anomaly on the planet it means a side quest is waiting for you and you only land on the planet to complete the side quest. Unlike the first game, the side quests are varied and bring you to many different locales. Other than that, you excavate resources used for upgrades from orbit by sending probes down to the planet. This can get a little tedious because the scanner moves rather slow, and there seems to be an over-abundance of one type of resource while the other three are relatively difficult to find in comparison.

The resources you find can be used for upgrading your weapons, armor, teammates and the Normandy.  Most of the upgrades are your standard fair like dealing more damage, taking less damage and holding more ammo. Some of them apply to everyone, but others only apply to Shepard or other specific team members, so you can choose your upgrades depending on who you want to use in your team. 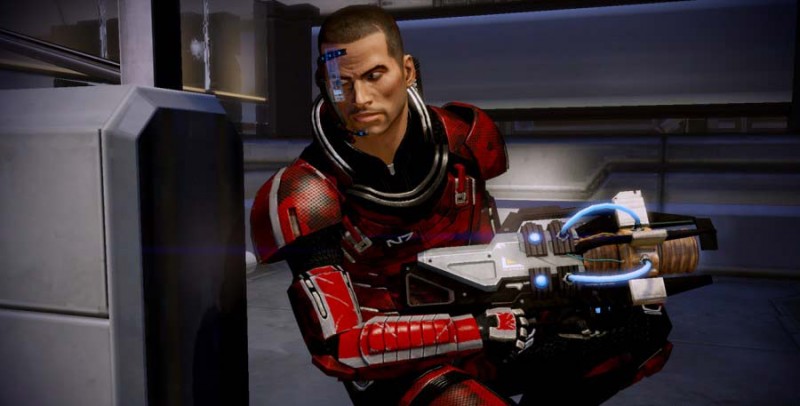 He will find you if you don't play his game... he knows where you live.

In addition to the upgrades system you can also level up. The leveling system is also pretty straightforward and all you have to do is drop skill points in the specific skills you want to level. The only difference is there are considerably less skills to choose from than there were in the original Mass Effect. This might seem bad for veteran RPG players, but having fewer skills per character makes each character a valuable addition to your team.

I think what I enjoy most about Mass Effect 2 is its import feature. This lets you import your Shepard from Mass Effect into Mass Effect 2. Doing this gives you a small level boost and a pretty good amount of credits to start off with. However, what makes this feature great is the fact that you can import your old Shepard’s look instead of going through the character creator to find the options you chose and it carries over the decisions you made in your play through of Mass Effect. For example, certain characters may be alive or dead and minor characters from the first game will be around offering their thanks or their scorn depending on what you did to help them or hurt them in the first game. This adds immense replay value not only for Mass Effect 2, but for the original as well.

Games as thorough as Mass Effect 2 are few and far between. The sheer amount of detail that went into the story is phenomenal and with the exception of a few minor technical glitches, the graphics and sound are fantastic. The new, streamlined style of play makes party management much less tedious and most fans will rejoice in the fact that there is no needless driving around empty planets looking for one random base. Mass Effect 2 is a complete joy to play and I see myself replaying it a few more times while I wait for Mass Effect 3.