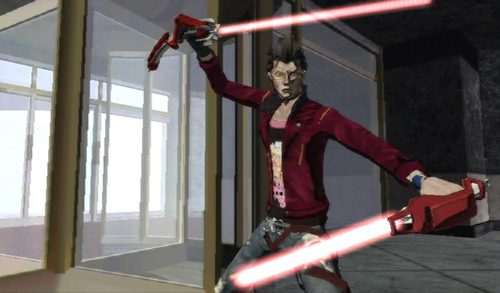 Marketing department says I'll be a huge hit among 15-19 year old males in both Japan and America! Fuckface!

What a strange game.

No More Heroes 2: Desperate Struggle isn’t a terrible game. But NHM2 isn’t a great game either. It bowls right down the middle of mediocrity lane. That statement isn’t meant as an insult because it makes a fantastic weekend rental, but unless the Wii is your only means of current-generation gaming, then I’d recommend avoiding a full-priced purchase.  I think my thesis for my NMH2 review is that the game tries too hard at everything and falls just short of all it’s goals. The end result is messy stew that is NMH2.

See if you can spot all the differences in these two pictures!

In NMH2, players once again take control of the assassin Travis Touchdown as he cuts down enemy after enemy with his lightsaber… I mean… light KATANA. His end goal is to become the greatest assassin in the town of Santa Destroy. Along the way, he encounters the coquettish Sylvia, and sets a personal goal to win her heart by showing now mercy to his enemies. It’s a classic tale of boy with lightsaber meets girl and wants nothing but sex and destruction. Not necessarily in that order. But maybe. You have to play to find out!

No More Heroes 2 tries to be EDGY…. and fails.

You know what makes you cool and makes moms everywhere really mad? Swear words! The more swear words you say in a sentence … or just randomly in public… the cooler and edgier you become! Fuckhead! See? I just did it there! And if you can catch people off guard while you’re using …. FUCKERS!!!…. swear words, then you’ve really accomplished your goal.  You too can be just as edgy as Travis Touchdown, the anti-hero in our little tale, by dressing up exactly like Johnny Knoxville circa 2001 and screaming profanity wherever it doesn’t really fit. How often does he scream profanities? About once per every kill.

About to slice someone in half from head to toe? “Fuckhead” is Johnny’s…I mean…. Travis’s preferred way to make baby Jesus cry.

Have you gotten Johnny really mad? Sometimes he yells “Strawberry on the shortcake!!” Ok… so that one isn’t a swear, but it’s still really annoying after the 10,000th time you’ve heard  it. Since Travis’s voice is annoying to boot, it’d be fantastic to just have a check box in the options menu to turn off his commentary. Or, in the language of NMH2: “Have Travis shut the fuck up.”

Now, before anyone gets their panties up in a bunch. I’m not against swearing in ANY way, shape or form. But swearing should be used properly just like any other part of the English language. NMH2 swears too much or just in downright odd ways that is sounds like a 12 year old who just realized that he can swear in front of his friends and not get in trouble with his mom so he uses it in every fucking shit sentence that he cockingly tits can. I mean… balls! Who doesn’t love a good fucking swear now and a-fucking-gain? No one. That’s fucking who.

WARNING: Incoming penis reference. Be sure women folk and children are clear of the area.

I also grew REALLY tired of the intentional double entendres found in the game. The first few made me chuckle, but by the 2nd or 3rd hour in my play through I had enough.

We get it. His sword is his penis. He charges it up by shaking it in a jerking off motion. Also, the little dancing power meter in the top right corner that shows the power of his sword? That’s a penis too.  In fact, all the conversations between Travis and Sylvia (the blonde woman with the terrible fake French accent) are about sex.

And by sex, I don’t mean “gender.” I mean intercourse. And by intercourse, I’m not talking about the small Amish town in Pennsylvania. When I say “intercourse,” I’m talking about doing it. And by “it” I mean “the deed.” And by “the deed,” I mean I’m 99% positive that they’re talking about felatio,  cunnilingus, the missionary position, cowboy (standard), reverse cowboy, and a few other positions that can be found in the Kama Sutra. I don’t believe that the Dirty Sanchez came up…. nor the Alabama Crab Dangle. Still not sure what the hell I’m talking about? Visit your local library!

In order for a game to be a “mature” or “adult” title, it doesn’t necessarily need to contain swearing or nudity. The same is true the other way around. As soon as more and more people see that difference, we’ll start to see better and better games.

Back again are the side jobs where Travis can earn extra spending bucks on a few new lightsabers, clothes, and of course gym fees to increase stamina and power. Most of the side jobs are actually 8-bit games that play similarly to old NES titles. Sound neat? It’s not really. As a child of the 80s, I’m qualified to make that statement. 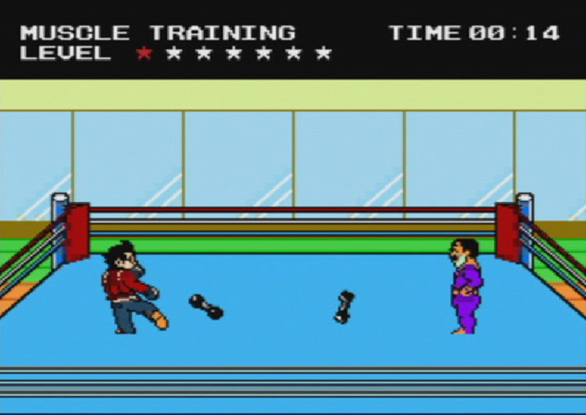 Most doctors actually recommend against punching and kicking dumbbells that are thrown at you. However, there is no official medical statement about dodging the kisses of your trainer.

For starters, back in the 80s, we didn’t really have that many games that had digitized voices. Ganon’s laugh in Zelda II was a rarity. Heck, we all almost laid an egg the first time we heard “The last Metroid is in captivity…” and Super Metroid was in 16-bit. So the fact that every “8-bit” game in within NMH2 has digitized voices seems unauthentic to this ancient gamer.

Secondly, some of the 8-bit games really aren’t that fun. The bug exterminator game is quite fun as is the space debris collection game. The pipe puzzle game (which is incredibly similar to the one found in the hacking mini-game in Bioshock) can be entertaining, but the rest were boring to me. Why? Probably because I’ve played them all when I was a little boy. In fact, I still dust off a lot of my older games and play them. The problem here is, I thought I was playing a brand new game that costs $50. So to toss in so many 8-bit games in here kinda irks me. All in all, they did their best to try and get as many platforms represented in 8-bit fashion: racers, adventure games, platformers, fighting, etc.

And my final beef with the side games is that they all aren’t 8-bit. The final side-job you get, collecting scorpions, is fully rendered in 3D. Why the hell weren’t they ALL in 3D or ALL in 8-bit?

No More Heroes 2 tries to have a story and good acting… and fails.

The story of NHM2 is abysmal.Fans of the original NMH will remember Travis’s story of rising to be the best of all assassins by killing them all in a one-on-one tournament. As far as the story goes, that’s pretty much where they should have stopped. But they didn’t. Instead they stapled, paper clipped and duct taped elements of stories onto the main story, but nothing of substance. Personally, I would have preferred them to just give me a list of people to kill and then set off to destroy them a la Mega Man. There is a facade of choice given to the player since there is a map of sorts. But in reality, there is no open world navigation and the map could have been replaced with a “next level” or “shop” option in between boss fights. 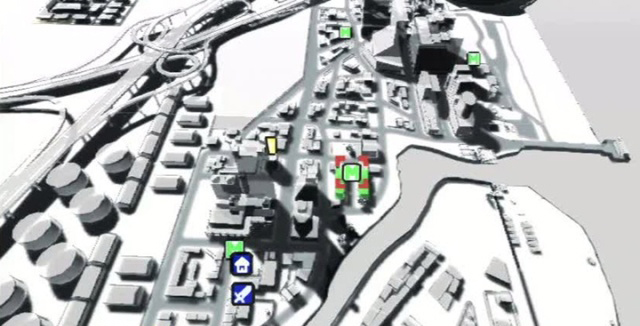 Don't be fooled. There is no open world travel.

And the acting is equally terrible. Robin Atkin Downes is no stranger to video game voice acting, but the voice of Travis is simply too whiny to come across as cocky or strong. And the fake French accent of Paula Tiso (who you may or may not know as Lulu from Final Fantasy X) is so bad it probably worsens French-American diplomatic relations.

No More Heroes 2 tries to have awesome gameplay… and mostly succeeds.

Yea, I can’t bitch about everything in the game. It does do a few things correctly. For starters, when you finally get around to the killing, swinging around a lightsaber is just as fun as you’d imagine it would be in a “current day” environment. Graphically, you’ll sometimes forget you’re playing a Wii game due to its stylized art style. It does suffer from more than its fair share of clipping issues. The largest graphical offender is actually the lightsaber effects. Sometimes the game can’t quite keep up with the action and several false lightsabers will be rendered on screen. This happens both with Travis’s and enemies lightsabers. It’s not game-breakingly-bad, but if this glitch were present on the PC, PS3 or the 360, gamers would be screaming for a patch.

Ok! Here is what No More Heroes 2 is. It is not a bad game. It is not a great game. No More Heroes 2 is what you get if you take an NES, Johnny Knoxville, a few Star Wars lightsabers, a healthy dose of low polygon count cel-shaded graphics, a bucket of randomly used swears, a cluster of bosses that look like they’ve been rejected from other video games, and a lot of jiggle-physics, place everything into a jar and then try to market as best you can to both Japanese and American 17 year-olds by talking a lot about both anime and professional wrestling.  NMH2 will make an awesome weekend rental. It only lasts about 9 hours long and that’s including the side-revenge missions. After a single playthrough, there is little reason to go back.

12 thoughts on “No More Heroes 2 Review”