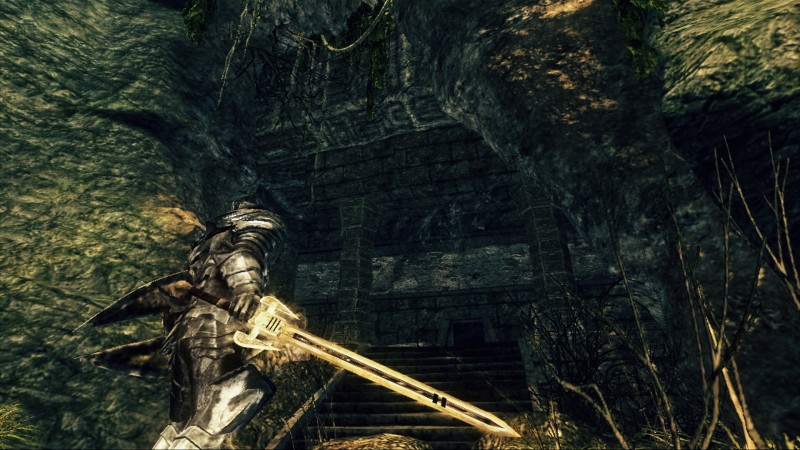 Over the past year, there have been a great many large scale RPGs released, some of which received wide acclaim while others ended up living under the shadow of those successful titles. In October 2009, Piranha Bytes’s game Risen was the latest title released into the highly competitive genre, a game which received generally positive reviews. After a few months and two big titled RPGs later, the Xbox 360 version of the game finally reached North America. Now I know what you are thinking: A game ported from the PC to console, especially an RPG is bound to flounder. Before you rush to judge, let us examine this version of its PC counterpart thoroughly. 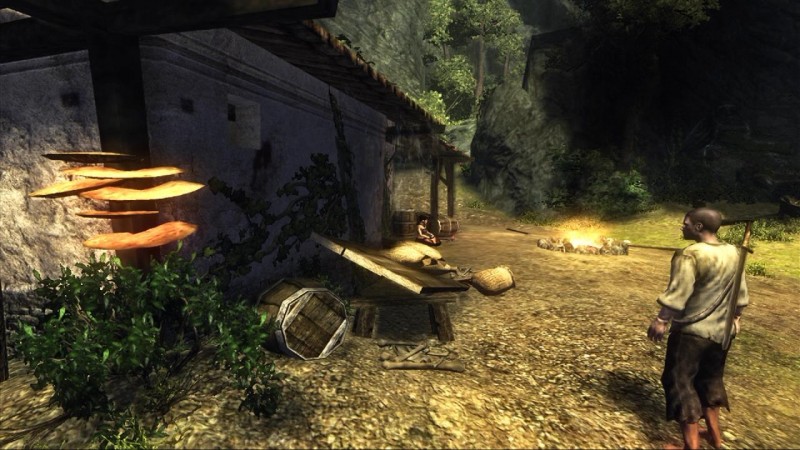 Risen is set in a world where humanity had ousted the gods of old from their realm, setting the stage for destruction of the entire world by titans who had been imprisoned by the exiled gods, but were set free after their departure. In addition, ancient temple ruins with mysterious powers began rising from beneath the earth revealing hidden dungeons and labyrinths laden with treasure. Consequently, a religious order known as the Inquisition arrived from the mainland to the island of Faranga to investigate the mysteries behind these ruins and isolate them from the local populace. You play as a castaway, who was shipwrecked along with a woman named Sara, on the island from a devastating storm with virtually nothing except your life.

As you soon discover, the island is filled with mystical creatures as well as rival factions trying to influence the future well-being of the island and its inhabitants. The player is given the choice of either joining the Order of the Inquisition, who are based out of the Monastery and Harbor Town, or the rebel bandits under Don Esteban, who are encamped in the swampland outside of one of the many temple ruins throughout the island. Each side has its own strengths and weaknesses such as weapons and abilities. If you find yourself more of a spear and staff wielding mage, then the Inquisition would be more to your liking. If you like extortion, drug trafficking, and thieving, then join Don Esteban’s crew. Personally, I felt that the Order was too fanatical for my taste and the idea of rebelling against an organized religious order sounded pretty badass. There’s nothing more satisfying than wielding a bastard sword and shooting crossbows. 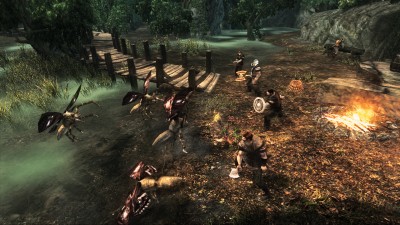 Fight with fellow bandits for survival

Risen’s gameplay has many great features that definitely allow for a unique gaming experience with each playthrough. The first of these is the way players can choose their own paths as mentioned between the Inquisition and the bandits. I must admit that I did not particularly like either side all that much, so I tried to stay in the middle, but the missions that I did kind of forced me to lean to one side or the other. The middle ground is virtually nonexistent. Players’ decisions count with regards to your character’s reputation and future consequences during your quest. Although there is no official meter to display your official leaning overall, decisions still play an important role in questing, especially if you are dealing with NPCs who can teach you abilities, which could potentially aid you in completing objectives.

Another feature central to Risen is the player’s ability to mold their character to fit their own playing style rather than selecting from predetermined classes. This allows for a greater leeway of potentially creating a hybrid character that can both fight in close combat or ranged combat as well as magic casting. Even if you choose to be a straight-up fighter, you can still cast magic with the help of scrolls that can be found throughout your quest either in shops or treasure chests. Whatever style of fighting you eventually choose, you will be able to gain new moves as you level up your proficiency in the weapon that you use the most. There are no limitations as to the types of weapons you are allowed to use. Make sure you try each weapon type as each one has its strengths and weaknesses depending on the situation. 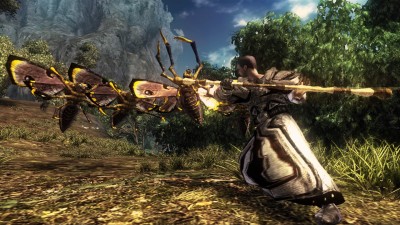 YOU SHALL NOT PASS!!!

In addition to improving weapon usage in your character, you will also be able to learn a variety of skills that will help you throughout your various missions. The only downside to this system is that in order to improve skills, you need to pay a hefty sum of gold to an NPC in order to learn that skill. The more advanced the skill, the more expensive it becomes. This also forces players to really think about what they want to improve in thanks to the budgetary constraint. I found myself hurting for gold in a few instances. Personally, I would rather earn a fixed amount of experience points and then distributing it to the skills that I would prefer as in Mass Effect or Dragon Age.

The next two features that are worth noting are the ability of crafting weapons and objects and the prospecting rare materials such as gold, iron ore, and obsidian to use in creating unique weapons and accessories. The smithing ability certainly comes in handy if new weapons are difficult to obtain. In many instances, the weapons and items that you create tend to be stronger and better than the store-bought products. Naturally, the higher your smithing skills, the better your products will be. The same is applicable to prospecting; the higher your skill, the more resources you gain along with some random gems that you can potentially get from say a gold vein. 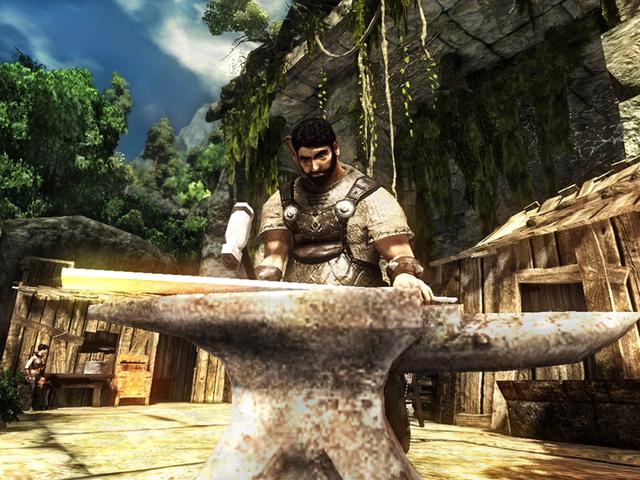 Make your own weapons

Thieving skills such as lockpicking and pickpocketing have mixed effectiveness. Like the other skills mentioned, you must learn them from NPCs, most likely the bandits that you encounter. In order to pick locks throughout the game, you are going to need to find or buy lockpicks, which are pretty cheap. It is pretty simple; all you need to do figure out the combination with the left analog stick. Be careful though! If you mess one up, your pick breaks and you would need to start the combination over again. As per the other skills, the higher it is, the more complex the locks you can unlock, which means better items and more gold. Pickpocketing is pretty mediocre. Although great in concept, it is pretty poorly executed as you need to talk to your intended target, mainly NPCs with actual names, rather than subtly walking or sneaking up to them and choose one item you would want to steal. After that, you cannot target them again.

The last important piece to Risen, of course, is the combat system. There were things that worked and things that were in need of some refining. The basics of slashing and shooting are smooth and your hits register on your targets. Blocking attacks works, but can become frustrating with multiple enemies as the targeting system is hard to decipher. When you target an enemy it is difficult at times to distinguish who you are fighting since you are given little indication except for maybe the name of the enemy you are engaging. Parrying an attack is all about timing, but is not as central to fighting as I thought it would be since you can quickly figure out an enemy’s combo pattern, which you can easily block until he finishes and then counterattack. When you find yourself in need of health, you can access your inventory list, which pauses the game. For easier access, you can assign items to hotkey buttons for quicker execution. If you are in a town, you can just go to sleep in a bed. After a battle, you are able to loot your vanquished foes for their items. However, if you are KO’ed they can loot your body as well, so fight with caution. 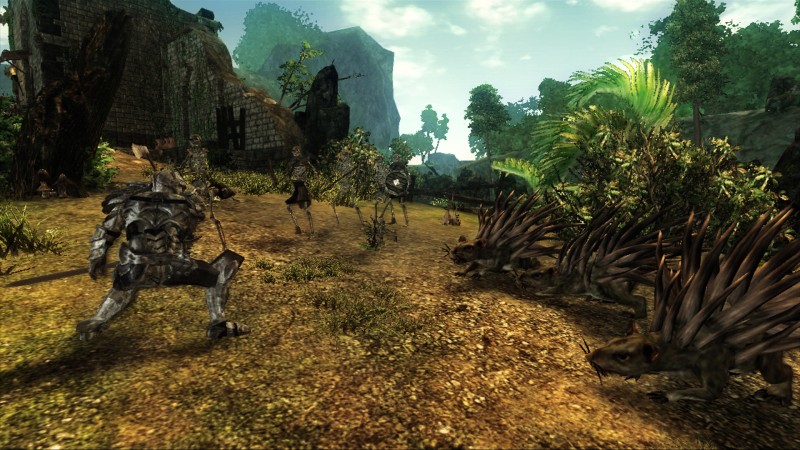 Fighting against all odds

Overall, the Xbox 360 version of Risen is a pretty decent port from its PC counterpart. Although there are still issues that need to be addressed, the wide-ranging choices, non-linear world, and character development concepts work really well. The graphics are a little outdated as foliage appear very pixelated and flat in some cases. Characters models and facial expressions harken back to the Xbox days, but graphics aside it does not affect the way the game performs as a whole. The real-time system from daylight to nighttime as well as the changes in weather are well executed and add to the environment effectively. Despite some of its shortfalls, the 360 version of Risen deserves a playthrough, but I would invest in the PC version as future patches are easier come by and the graphics wouldn’t be as much of an issue due to the powerhouse gaming PCs out there on the market.