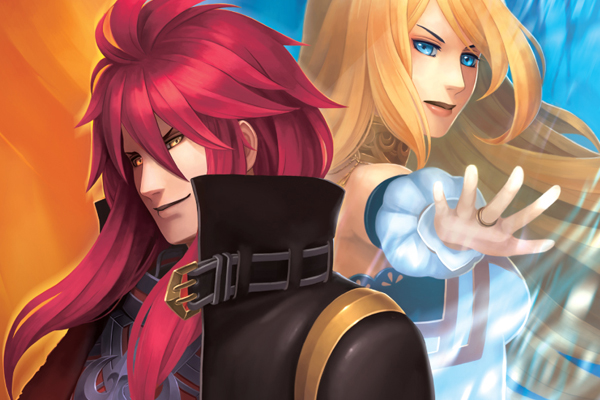 You probably haven’t heard of Nippon Ichi Software’s Last Rebellion, but that’s hardly surprising considering what it is.  A PS3 exclusive and an incredibly Japanese RPG released a month before Final Fantasy XIII and bearing the comparatively low MSRP of only $49.99, there’s a good chance it’ll pass over the heads of most gamers.

But that’s probably the universe’s way of sparing as many people as possible from the abhorrent mediocrity that is Last Rebellion.  It hits rock bottom in almost every conceivable area and goes above and beyond to irritate and infuriate the player.

The backstory involves two warring deities who felt like using mortals as pawns in their power struggle.  You play a ‘Blade’ (generic sword-wielder) named Nine who, after being killed, must share a soul with a ‘Sealer’ (generic mage) in a quest to thwart your evil brother and save the world.

You’ll be hard pressed to find a character as unlikable as Nine.  He has the self-deprecating and brooding nature of Squall, the unbearable arrogance of Irvine, and the tiring immaturity of Zell.  The other characters are no better.  Your brother, Alfred, is misguided, jealous, and power-hungry, and Nine’s female companion, Aisha, is a predictable blend of hostile and flirtatious. 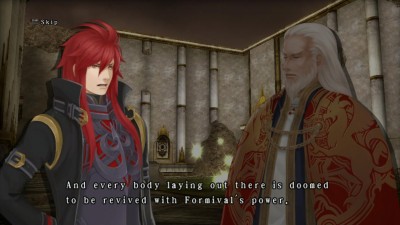 You see the guy on the left? You'll want to beat him to a pulp before the end of this cutscene.

The horrible storyline and characters are portrayed with equally painful writing and voice acting.  Characters calmly discuss monumental events like the murder of your father (spoiler) and Nine flat out states in the first act of the game that he “had a crappy childhood.”  The voice acting is that special kind of embarrassing where you’ll scramble for the volume control or a pair of headphones just so no one else can hear it.  Imagine an entire game as cringe-worthy as that laughing scene from Final Fantasy X.

Gameplay-wise, it manages to completely fumble the simple turn-based combat formula established over 20 years ago.  The battle system involves the targeting of individual parts of enemies, much like Fallout’s V.A.T.S. but far worse designed.  Attacking with a sword allows you to ‘stamp’ (target) enemy body parts and these ‘stamps’ will remain for a few turns before you have to attack & stamp again.  Once a target is stamped, you can use magic attacks on those same body parts until the stamps wear off.  Attacking & stamping limbs in a certain order for different enemies will create combos and increase experience.

Stamping requires one ‘Command Point’ and these regenerate at a painfully slow rate.  Success in battle depends on how many CP’s you have and should you find yourself low on them, some battles will drag on almost endlessly as your gauge refills.  And since physical attacks are inextricably linked to ‘stamping,’ performing a melee attack more than a few times in a battle is a recipe for disaster.

The game intends for you to attack once, stamp your opponent, and then use magic to finish him off and this works up until you encounter the first boss whose health is unreasonably high and who is resistant to magic & effect attacks.  The omission of a vanilla ‘attack’ option is inexcusable and the entire system is needlessly complicated and in severe need of streamlining.  It also doesn’t help that each battle is lengthened by a good 30 seconds because you have to ‘Seal’ all defeated opponents. 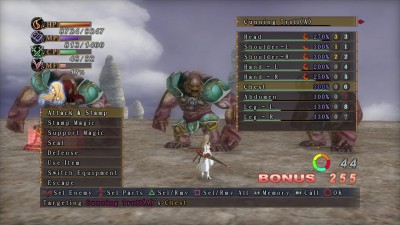 Battles can be likened to navigating through drop-down menus.

Enemies patrol designated routes in each area and while there aren’t many, they respawn, literally, when you turn your back.  After finishing a battle, you can take a few steps away and rotate the camera 360 degrees only to find your old friend back at his post.  This seems to be intentional because grinding is the only way to play the game.  If you don’t power-level for a few hours at the beginning of the game, you’ll be far too weak to face later challenges.

Graphically, the game is atrocious, especially for a PlayStation 3 exclusive.  It honestly looks like it was originally a PSP or PS2 title that was hastily upscaled.  Cutscenes are delivered with static character art and backgrounds and the overall art style is nothing more than what you’d find in the anime section of DeviantArt.  Characters look bland and lifeless and environments are empty and feel incomplete.

Last Rebellion is a game that didn’t have to exist.  It brings absolutely nothing new to the table and it’s an exercise in patience to endure even the first quest.  Not a single aspect of it fails to offend.