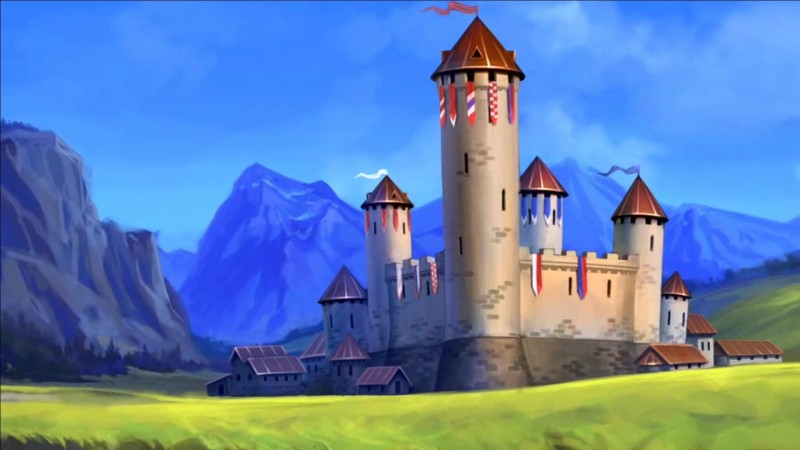 I’ve never had the pleasure of playing Majesty: The Fantasy Kingdom Sim in 2000. It was always one of those games that I’d play “if I only had the time.” Now that I have a copy of Majesty 2, however, I wonder if I should make time right now to go back and play it. I probably won’t simply because I’m notoriously bad at real-time strategy games even though I like to play them.

During my first gaming session with Majesty 2, I played for about 6 hours straight. I wasn’t forced to play out of duty. I didn’t have an editor breathing down my neck to get this article in on time. My gaming was out of pure enjoyment. I simply lost track of all time much like when playing Rollercoaster Tycoon or Elder Scrolls IV: Oblivion. I was a addicted through and through.

Majesty 2 is a real-time strategy game with heavy sim society elements. Or it’s a simulator with heavy RTS elements. It really depends on your point of view. 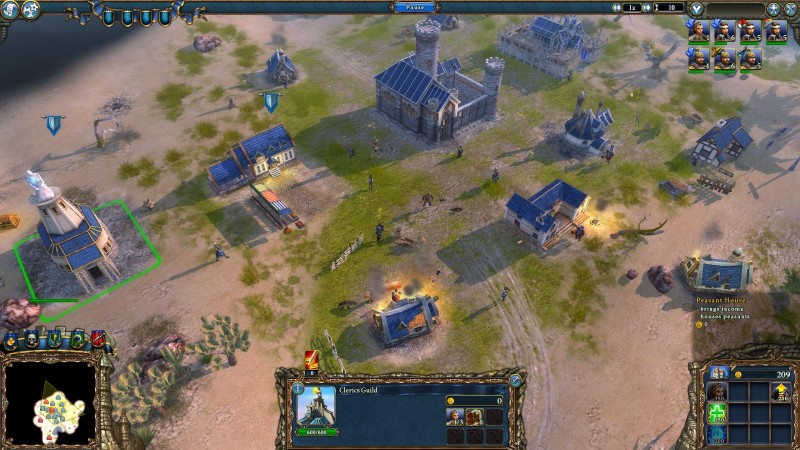 As the king of Ardania, it is up to you to create a successful working kingdom, complete with its own militia and economy. You are not in direct control of any of your subjects. They all have a fantastic artificial intelligence of their own.

For the most part, you control what buildings are erected and where they are placed. There are some exceptions, however. You can’t control where the main castle is located. Interestingly, your subjects, since they have a mind of their own, build their own homes and keep them maintained.

Majesty 2 has set goals like most top-down real time strategy games. “Conquer target A.” “Defend against enemy wave for B minutes.” “Free allies from C and escort back to your home base.” etc., etc. The difference between Majesty 2 and most RTS series, is that there is no management of your units… at all.  You “control” your units through your economy. 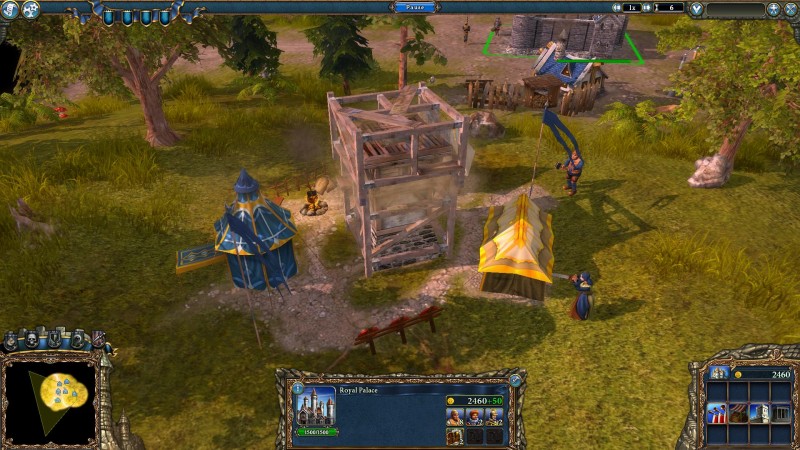 To defend your home, you have several role-playing archetypal hero units that you can bring into your kingdom. Before any of them can come into play, you need to build their specific barracks-types, or as they’re known in Majesty 2, “guilds.” You can build guilds for Wizards, Rogues, Warriors, Rangers, Elves, Dwarves, and Clerics.

Once each hero is created, they wander about the roads of your kingdom looking for things to do like slaying ogres or killing large aggressive rats. The more heroes fight, the quicker they level up and the stronger they become. Heroes also get their own money to spend in town off the corpses of their fallen enemies. Its like they’re living their own little western role playing game within your kingdom. 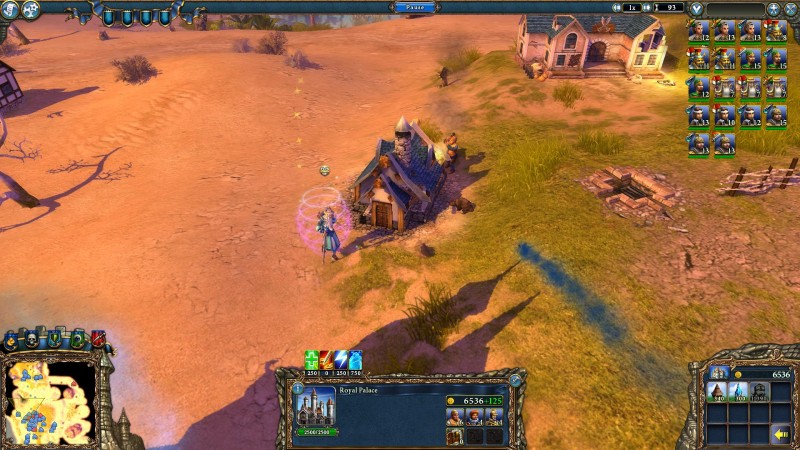 Leveling up your heroes, like Gindilf here, is addictive. You can keep an eye on your heroes' health and skill level in the top right of the screen.

Since the heroes have a mind of their own, they care very little about the overall defense of your property unless it’s financially beneficial to them. To tempt your heroes into seeing things your way, you place bounties and rewards on the objectives you want to conquer. For example, if you want to have your villagers to build you a new statue in yourlikeness  without being bothered by roaming monsters, you can put up a protection award on the construction. Heroes who are low on cash will see the reward, and go where the money is. You can do the same to conquer enemy bases by putting a large sum bounty on the enemy’s fortress. To explore new map areas, you can pay rangers to head out into the wilderness and report back to you. It’s truly a fascinating and addictive way of playing.

That’s not to say they’ll never attack roaming enemies within your territory. Since monsters drop cash, heroes will attack rats and skeletons if they’re running low on funds. They will also fight in self-defense. 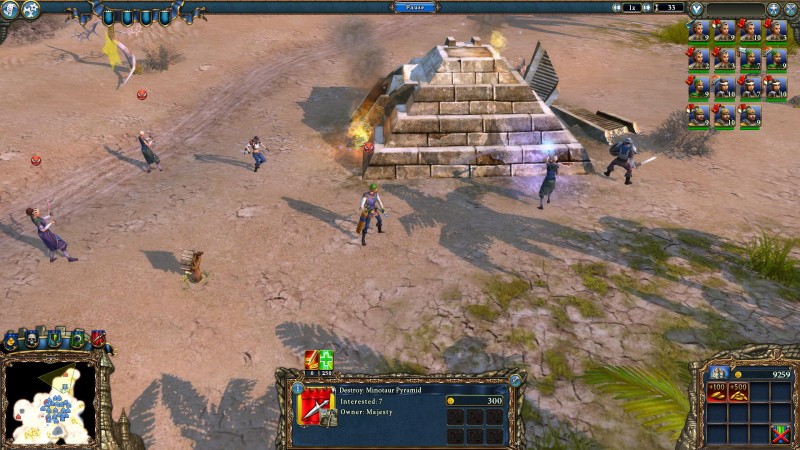 A small group of heroes attacking this Minotaur's home... not because I told them to... but because I enticed them with 300 bucks.

Paying out cash to your heroes will drain the kingdom’s coffers pretty quickly when you realize you’re surrounded on all sides by the enemy. There are a few different ways to get money back into the economy. Tax collectors go door to door and take a tribute from all the buildings. This method is useful to have a small trickle of income at all times. The only problem is, your tax collectors must be very tasty because it feels like the rats are constantly nomming on their ankles. I’ve lost probably two dozen tax collectors to the little vermin before they could reach my castle doors to drop off their money.

You can also set up a marketplace and blacksmith for your heroes to visit. If you sell potions, amulets, upgraded armor, and weapons, your heroes will spend the money they earned from slaying beasts and collecting bounties in your stores.

Finally, you can make a lot of cash fast by setting up a trade route in a more experienced economy. Donkeys will deliver goods and cash from into your marketplace, however, donkeys are easily killed and the trade routes are expensive to build. 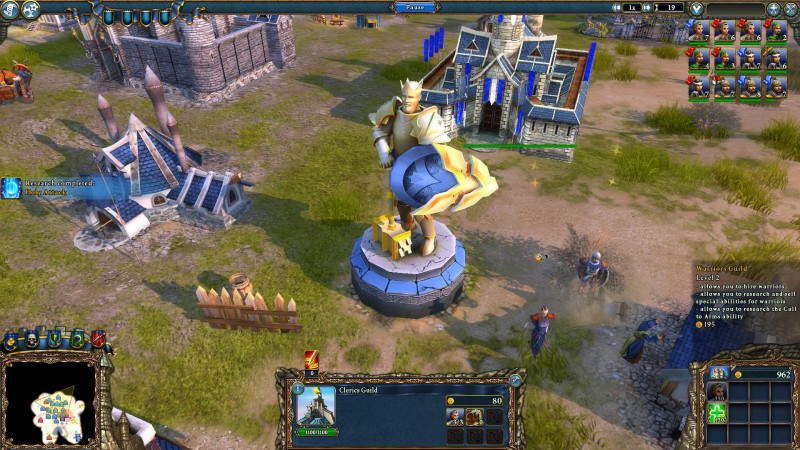 I am your king. Bow down and kiss my butt. Oh you won't? What if I pay you?

Majesty 2 is not without it’s faults, however. Graphically, it’s not much of a step up from Warcraft 3. There are some neat physics involved when heroes get chucked across the screen by ogres or when your buildings collapse, but all in all, they’re pretty low-end. They aren’t game-breakingly bad by any stretch of the imagination. In fact, these types of graphics work great for people with laptops. However, for a PC game, I like to play something with a little more gusto even in my RTS / sim titles.

My biggest issue with Majesty 2 is its difficultly. As I said earlier, I’m not very skilled with RTS games. However, I feel that Majesty 2 exhibits some huge jumps in difficulty during the campaign section and I was only able to complete about 1/2 the campaign. I hopped into the options menu to dial down the challenge level, but there is no “Easy / Medium/ Hard” slider. Wanting to just power through a level or two, I even searched for cheat codes. There are simply none to be had.

So, be warned. Majesty 2 is a blast to play, but it’s tough as nails. 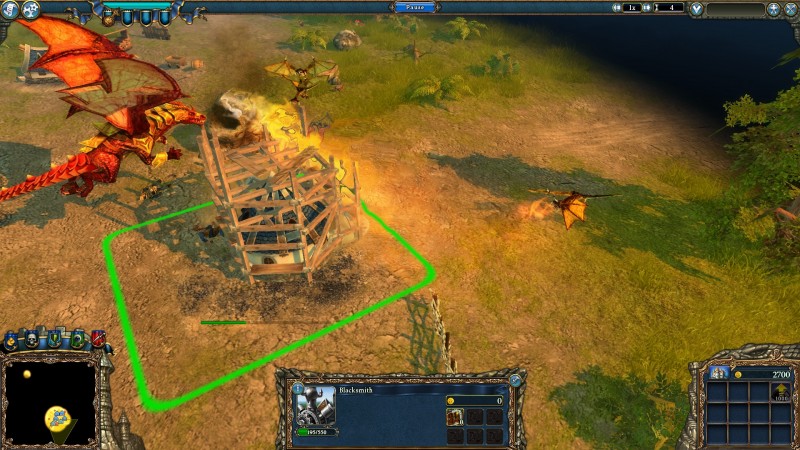 Forty-two seconds into the round and I'm still building my first building. I don't have a single hero to defend the realm. The game tossed this at me. No, that's not a happy fuzzy squirrel. That's a damn dragon with it's little hungry baby dragons.

For RTS fans, Majesty 2 is worth playing while you wait for Starcraft 2. You can do a hell of a lot worse by playing something like Red Alert 3. However, if you aren’t a RTS junkie, Majesty 2 may be a bit difficult for you. And since I could find no difficulty options or cheat codes, you should definitely try it out before you buy it. Luckily, there is a demo which you can find here.

Majesty 2 is a time thief and I mean that in the most flattering way it can be written. The last game that made time fly by this quickly for me was probably Sims 3.