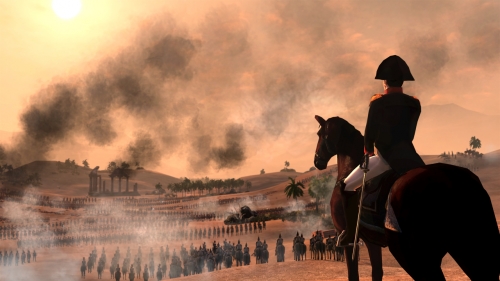 It is 1792 and France is in total chaos from three years of revolution and war. Threatened with foreign invasion from the reactionary monarchies of Europe and Royalist insurgency at home, the new French Republic needed a new hero to lift them from the chaos. That man was a five foot two artillery officer named Napoleon Bonaparte from the little Mediterranean island of Corsica.

Less than a year after the release of Empire Total War, the largest installment of the Total War series, Sega went a step further and released Napoleon Total War in late February 2010. Although smaller in scope and scale from its Empire counterpart, Napoleon offers a unique Total War experience that is characteristic of all subsequent installments, as expected by fans of the genre.

Empire — which encompassed three large land masses including Europe, North America, and India as well as an abundance of nations and factions — ended with the beginnings of one of the most chaotic periods in European history, the French Revolution. Napoleon picks up where its predecessor left off with the advent of a new age of warfare distinct from its 18th century traditions. Do not be fooled by the notion of being given only the map of Europe and one grand campaign for world domination. What makes Napoleon unique from the other installments of the franchise is that it actually tells a historical story rather than just providing a map and factions for you to choose from.

Napoleon Total War is broken down into a series of campaigns throughout Napoleon’s military career and reign as emperor from his early days as an artillery captain to commander of the French Army of Italy in 1796 where you get to play one of his most notable campaigns—the conquest of northern Italy. The tutorial is really where the story of Napoleon Bonaparte begins as classic to the Total War series, you follow a story while acquainting yourself with the controls and other basics. After completing the tutorial, there are three other modes for players to choose from. The first of these is Napoleon’s Campaigns where you can choose to continue on with the story and play through Napoleon’s rise to prominence culminating with the final battle of Waterloo. However, players need to play the campaigns chronologically to unlock more of Napoleon’s campaigns. Not only do you get loads of battles, but you get an interactive military history lesson! This may turn some gamers off, but I personally have been waiting for something like this in a long time since the days of the turn-based Talonsoft Battleground series of the 1990s. 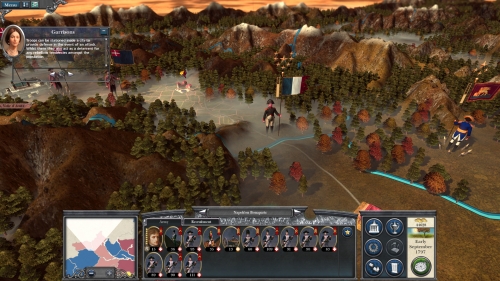 In Napoleon’s Battles mode, players can take part in various famous battles that played crucial roles in different points of Napoleon’s military career. However, similar to the Napoleon Campaign mode, players have to play in chronological order to unlock other battles. This can be frustrating to casual players, but don’t count the game out yet. If you’re not into managing entire cities, diplomacy, and moving pieces around the campaign maps, then this is the mode for you since it is just purely epic battles. For all those that are anti-Napoleon or anti-French, the next mode would most definitely give you the most pleasure. The third mode deals with the Allied coalition powers against Napoleon’s drive for world domination. Players get to select from one of four powers: Great Britain, Austria, Prussia, and Russia. This mode would be more familiar to Total War veterans as you are given the traditional large campaign map. Here you would manage policy, diplomacy, espionage, taxation, city development, recruitment, technological research, and, of course, battles. However, you only have two victory choices in Napoleon unlike in Empire: a short campaign of limited objectives to be achieved by a set time or simple world domination. In addition to these modes, there are custom battles where you can choose your units and maps or watch replays of past battles. You can also fight against people online. 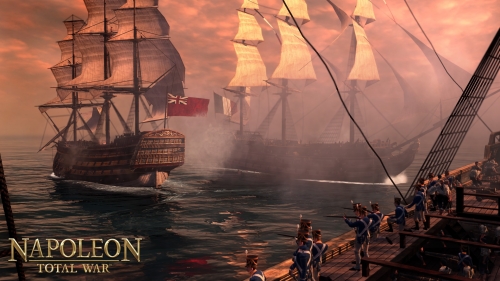 Naval battles are close and brutal

As per Total War tradition, the major aspect of emphasis in Napoleon is the massive land battles. Also included in this title is the relatively new concept of interactive naval battles, which the game took from Empire. Before you commence a battle, you can select whether or not to allow other players to join your battle, a new feature to the series. The setup of battles is pretty much the same; you enter battles into a deployment phase where the game is paused and you are able to position your forces in custom formations or choices that are provided to you. However, I found that the given formations still need a bit more work because despite what is shown in the diagrams, the resulting formations never look like what is shown, which could get pretty frustrating. Consequently, I found it better to position units manually. Once the battle begins, everything occurs in real-time, but can be slowed, fast forwarded, and paused. The naval battles work the same way, but the only difference is the factoring in of wind direction, which could be the deciding factor between victory and defeat. The only downside to the large scale battles is the amount of micromanaging involved as you need to constantly be aware of what’s going on around the battlefield just as a good commander should be. You may find yourself having to constantly pause to reassess the situation and plan accordingly. 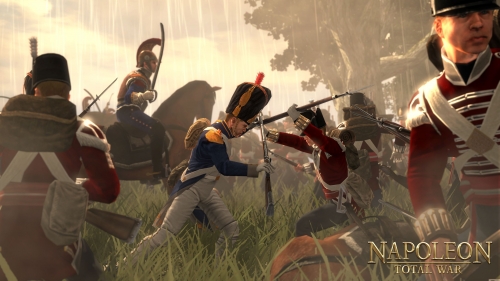 Like the previous games, Napoleon features a wide range of unique military units ranging from militia units to the elite units of the various nations such as the Imperial Guard for the French. The officer units are actual people from the Napoleonic period and feature unique abilities that prove to be assets during battles. As players will discover, the quality and finesse of your forces is a big factor in triumphing over your enemies. The attention to detail by the developers has amazed yet again as the uniforms of all the factions in the game are very distinct and reflective of the armies of the time. The movement of units look very natural from marching to the loading and firing of muskets and hand-to-hand combat with bayonets.

The environment and topography models in the game are also worthy of note as they are effectively incorporated to battle sequences. Utilization and knowledge of terrain on the battlefield is a necessity in Napoleon. Foliage and buildings are well designed and could factor into your strategy depending on your position on the map. For instance, you could hide units in a nearby forest to ambush an approaching enemy. You may also use stone walls as defensive barriers from enemy gunfire. However, naturally, a sustained artillery bombardment can render structures obsolete, making the atmosphere of battle all too real. 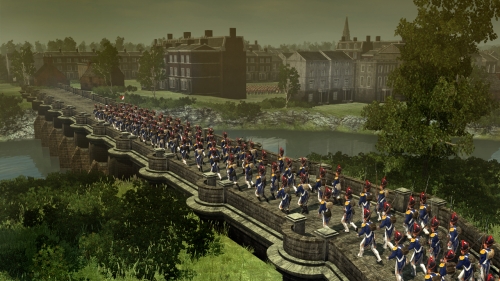 Sound effects were effective and played an important role in the game. When you think of battles, especially those of the Napoleonic era, you immediately think of muskets, the booming of cannons, cavalry charges, and the fife and drums. Napoleon does not fail in implementing all of that. From the background sounds of weather to the waving of flags and sails in the blowing wind, Napoleon’s sound effects make the experience a lot more gratifying. In addition, the soundtrack provides a supplemental effect that makes battle in the game more epic. Depending on the situation, the music begins to crescendo to a climax adding to the gravity of the action. The orchestral tracks on both the battlefield and campaign maps are appropriate to the period and give a nice ambiance to the game.

Overall, Napoleon Total War is what players would expect from the Total War series: epic battles and management, albeit with a greater emphasis on combat. The combination of great detail from environments to military units, sound effects, and in-depth gameplay make the experience absolutely fulfilling. However, the similarities between this game and Empire Total War could potentially confuse those wanting to try Total War games. Though Napoleon is similar in gameplay and mechanics, it is more specific and focuses on one aspect—the Napoleonic time period. If you are a fan of Napoleonic history, then this is the game for you. If you are looking for a more open-ended experience with more factions to choose, then Empire would be your cup of tea. Veterans would most likely get this title just to add to their ever expanding collection.