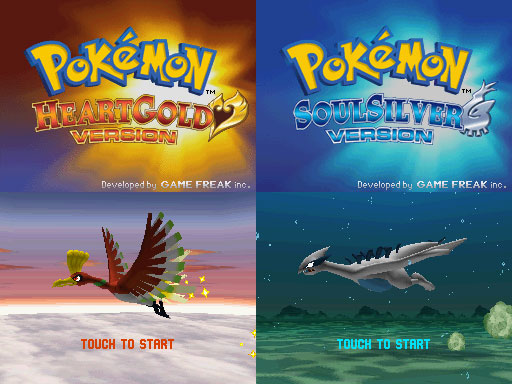 Ever since the days of the original Game Boy Nintendo and Game Freak have been giving us Pokémon games in a variety of different colors, metals, and precious stones. The latest one to hit the shelves is Pokémon Heart Gold/Soul Silver which if you haven’t already guessed, is a remake of Pokémon Gold and Silver for the Game Boy Color. HG/SS have been given graphical upgrades and an updated Pokédex to include all of the monsters from Ruby, Sapphire, Diamond, and Pearl, but when it comes down to it, it is the same game play you’ve been seeing since Red and Blue debuted on the Game Boy. 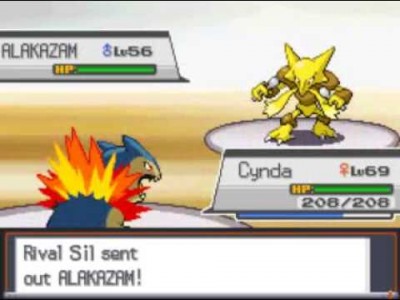 This would be illegal in the U.S.

For those who have never played a Pokémon game, they are turn based RPG’s where you capture animals and monsters to do your bidding. Throughout the game you pit them against other trainers’ monsters in battle. There are items, leveling, element strengths and weaknesses and everything else you would find in a traditional Japanese RPG. The games definitely look like they are geared towards a younger audience, but once you get past the surface layer there is a lot to learn.

The story in HG/SS is pretty straightforward. Like the other handheld Pokémon games, the goal is to be the very best, like no one ever was. To do that you need to travel through many different cities in a large region called Johto to reach the Elite Four, the best trainers in the region. Throughout your journey you will capture a variety of different Pokémon, take on powerful gym leaders for their badges, and do battle with the nefarious Team Rocket. There is some stuff on the side you can do for random items, but most of the game is spent going through the main story.

As I and probably everyone else expected, HG/SS got a complete graphical overhaul from the Game Boy Color version. The graphics are not a technical achievement by today’s standards, but the world is colorful and it looks good for a mostly 2-D game. There are new sprites for the Pokémon and every area in the game is unique. Also, whichever Pokémon is first in your party follows you around when you walk. Some of those sprites look good, but others look weird and disfigured.

If you have played a Pokémon game in the past you will recognize most of the music. The soundtrack is generally upbeat and it always fits whatever situation you are in. There is cheery music in cities, dreary music in caves, and some intense battle themes. While the music is good, the sound effects leave something to be desired. Ever since Red and Blue on the Game Boy, the Pokémon have been making random screeches or growls when they enter battle. Over 10 years later the sounds are still the same. It would be nice if they would update the sound effects to make them sound more animal-like and less like a 56k modem trying to connect to the Internet. 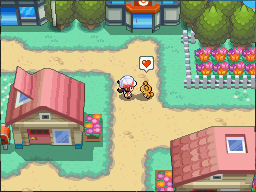 Is he saying he likes you, or is that what he wants for dinner

The game play in HG/SS remains largely unchanged from its predecessors. Throughout the game you catch Pokémon by weakening them and throwing pokéballs at them, and use them to do battle with other trainers’ Pokémon. As you battle your Pokémon gain levels, learn new moves and evolve into more powerful monsters. It is simple on the surface, but things start to get a little more complicated when you take the strengths and weaknesses of each type and how the Pokémon’s mood affects its stats into account. This is a tried and true method and even after years of the same style of game play it is still fun to battle and find new strategies to take your opponents down whether they are NPC’s or your friends.

One thing I liked most about HG/SS is the menu system. The touch screen controls all of the menu options, but you can also use the D-Pad and the buttons. In my opinion, this is what the touch screen should be used for. The touch screen menu is quick and easy to navigate and it makes the game more fluid because you don’t have to stop and open the menu every time you want to save or switch Pokémon. You just look down and all of your options are right there.

Near the beginning of the game you are given an item called the Poké Gear. It’s basically a cell phone that stores your map phone numbers from some of the trainers you fight during your journey. I figured this was used strictly for rematch purposes, so I gave my phone number to everyone who asked for it. Little did I know that you can only challenge certain people to rematches on certain days and the rest of the time they’re just calling you to talk about random nonsense. It adds a little bit of depth to the game, but I’m starting to get tired of Youngster Joey calling me every 15 minutes to tell me about his top percentage Rattata.

Arguably the best thing about this game and one of the main reasons I bought it is after you beat the Elite Four in Johto you can travel to the Kanto region from Red and Blue. You can catch new Pokémon and more importantly, battle the 8 gym leaders and Red, the character you play as in Red and Blue. This adds immense replay value to the game and after you beat all of the gyms you can challenge each gym leader to a rematch and they will have a completely new party for you to fight. 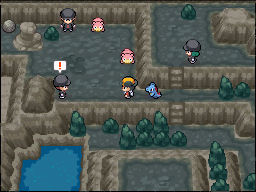 Team Rocket is back with all of their poison Pokemon

Even though HG/SS is mostly the same style of game as its predecessors you can’t really expect much more considering it is a remake. This particular remake does just about everything right and breathes new life into Gold and Silver as well as Diamond and Pearl since you can transfer your Pokémon between those games as well. If you want to do everything this game has to offer you will be at it for a while. Overall, HG/SS are great additions to the series and will please Pokémon fans and RPG fans as well.