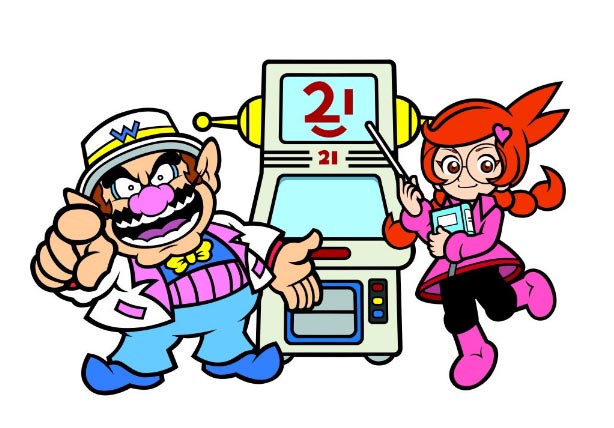 Ever since Super Mario Land 2 for the Game Boy, Wario has been a staple member of the Nintendo cast. In the Gamecube and Game Boy Advance days, he started up his own game design business called WarioWare Inc. where he and his co-workers make games that are only seconds long and made to be played in rapid succession. These “microgames” have been very successful and now WarioWare spans from the Gamecube, to the GBA, the Wii, and finally, the DS. 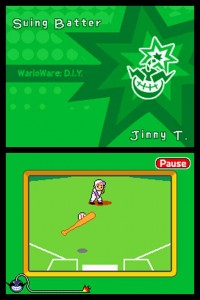 You get to make this.

In WarioWare D.I.Y. (Do it Yourself) Wario decides to hire you to design games for his company. Unlike the other WarioWare titles, D.I.Y. mainly focuses on the designing of the microgames rather than just playing the ones that come preloaded on the cartridge. This means to get everything out of this game you will need to have to be creative and use your imagination because you will be designing your own microgames from start to finish.

There are many things the WarioWare series is known for, and one of them is its charming, simple graphics. The games are almost, if not all, entirely 2-D and many of the microgames are made up of mostly simple drawings, however there is still a lot of detail to them. D.I.Y. is no different, and while the preset graphics are just as colorful and fun as the previous titles, it is really up to you how you want your games to look since most of the content will be user generated.

The same mostly goes for the audio as well. While there are preset sounds instruments and sound effects, most of the actual music will probably be your own content. The reason I say most is because there is an auto-composer for people are not very music savvy. You can tell the game what style and tempo of music you want and you will usually walk away with pretty good results. The rest of the in game music is upbeat and energetic, and if you played Mario Paint for the SNES you might recognize some of the sound effects in D.I.Y.

The way you actually play D.I.Y. is very different from the way you play the other WarioWare games for the most part. There are still preloaded microgames on the cartridge, but there are only about half as many as there are on the other titles, and they’re more used as a jumping off point rather than games you will go back to time and again. The main focus here is definitely creating your own microgames from scratch.

There are a few different aspects to making your own microgame and before diving in you have to watch some tutorials on how to make a basic game. Overall the tutorial is quick and very informative. You will probably get ahead of the lessons since the actual game making mechanics are very simple to learn, but they will teach you a few shortcuts that will make your life as a microgame designer much easier. 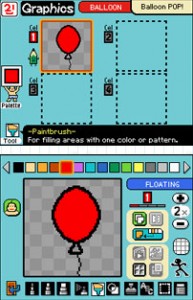 Is that Mario Paint?

After you get past the introductory tutorial you can start making your own games. The first step is to nail down your graphics and animation. This part gave me a rush of nostalgia because it looks almost identical to Mario Paint down to the rocket ship eraser. Here you design the background, the objects used in game, and their animation. You are pretty limited as far as space and colors go, but you can still make some pretty good looking objects if you can put up with the less-than-pinpoint accuracy of the DS’s touch screen. I would recommend a larger stylus too, because using the one supplied with the DS made my wrist hurt after drawing for a while.

The next step is using the music maker. This is also very reminiscent of Mario Paint. It allows you to make short compositions for your microgames with a variety of different instruments and sound effects. This is a great tool if you are musically talented, but if you are not you can always let the maestro do it for you. You just click on his little icon, tell him what you want, and he makes some music for you to edit, or you can leave it the way it is.

The last part of the game, and arguably the most difficult part to learn, is actually making it do stuff. This encompasses what you do and when you’re supposed to do it to win the game. The tutorials cover this difficult lesson very well and it is a straightforward interface overall.  But something in the process didn’t sit right with me. I figured out pretty quickly that the process revolves around “if, else” statements seen in some coding languages, only much easier. For example, the main formula for most games is “if you tap this, this will happen, or else something different will happen.”

The reason I did not enjoy this aspect of D.I.Y. is because part of my formal education revolved around programming, and it felt too much like work to me. I realize this will not be the case for the majority of gamers, but if you know how to code you will probably think the mechanics are way too restrictive. If you’re not a fan of coding you probably won’t have too much fun with it. 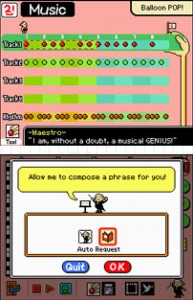 The music editor was my favorite part.

A very cool feature in this game is the ability to copy. Not just from your games, but from any game, even the ones that came preprogrammed. This means you can take the graphics or the music from any game you currently have on your system and use them in your own game. You can also go into the preprogrammed games and see how they work, which is great if there is something in your game you can’t figure out, but also appears in another mini-game.

Aside from the games, you can also create short comics as well. You have four frames and you can draw, or copy from other comics. Overall it seems like it was tacked on at the end and I doubt if many people are going to be spending any real time drawing four frame comics on the DS.

Now what would all of this user generated content be without a way to share it? Not a whole lot. Thankfully, there are a number of different ways to share the microgames with your friends and work on them together. You can send microgames locally, through Wi-Fi, or for an extra $8 you can download the WarioWare D.I.Y. Showcase from WiiWare which lets you transfer, store, and even play your games on your Wii as well as share them using friend codes. It’s a shame you can’t download anybody’s games, but the ability to do that would probably just invite people to make inappropriate games and upload them for the world to see.

If you like the creation aspect of games like LittleBigPlanet and Banjo-Kazooie: Nuts and Bolts then you will probably enjoy creating microgames with D.I.Y. The creation system is simple, yet robust and the tutorials teach you just about everything you need to know. If you are not a fan of those games, or if you’re looking to just play the prepackaged games, don’t purchase this title. All in all, I would recommend renting this title before buying it. The game-making mechanics may not be for everyone.