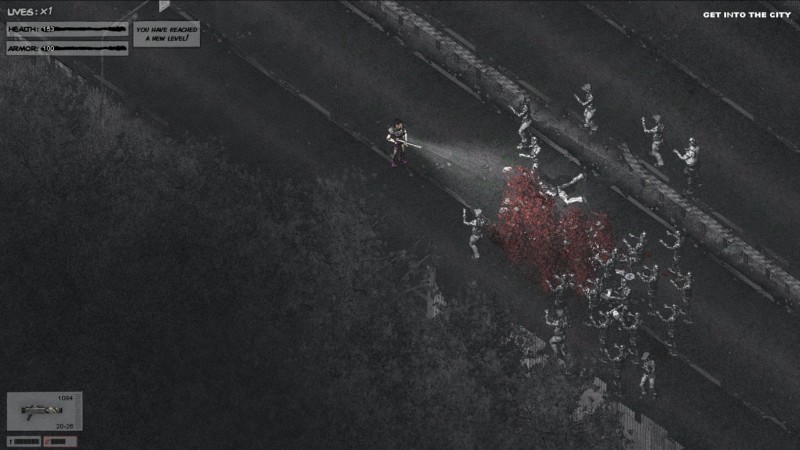 The guns are highly satisfying when you take down several zombies at one time.

Do you have your contingency plans in place for when the zombie apocalypse happens? No? Silly reader. It’s going to happen. It’s just a matter of time. Aside from packing your bags and boarding up your home, what better way is there to spend time while waiting for your neighbors to turn into undead walking flesh eaters than playing zombie video games?

Since I’m all Left 4 Dead and Killing Floor-ed out, and we’re only one day closer to Diablo III (which will release on the 13th day of the month of Foreverfromnow) I thought I’d go back to my roots a bit and play some top-down action RPGs. Zombie Shooter 2 scratched my itch.

Released by Sigma Team, Zombie Shooter 2 is as straightforward as a game gets. Gamers choose a character, select their stats and they’re instantly tossed into a city jam packed with zombies. The objective: shoot anything moves while avoiding getting your brain munched on. 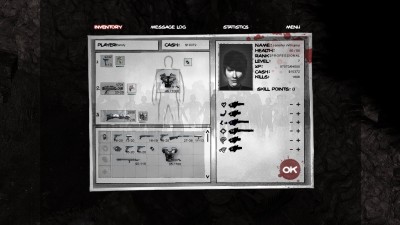 Inventory and stat management is as simple as it gets. It's all left clicks.

Along the way, zombies occasionally drop ammo, cash or health, but for the most part, when you need to stock up on essentials, new armor or weapons, you can purchase needed supplies from small human-controlled areas. Inventory management is very straightforward. Pistols go in the pistol slot, medium weapons go in the medium weapon slot, large weapons in the large weapon slot, etc. Players can also purchase additional goodies like better flashlights, assistant drones, and stat mods to uneven the odds against the endless crowds of the undead.

Outside of the safe zones, zombies come at you in gigantic hordes. Initially you encounter the slow-walking zombies, but as you progress, the zombies get bigger, badder and more mutated. Some of them eventually carry weapons or fire projectiles, but for the most part, the common enemy is your average brain-dead, Romero-type zombie.

Stylistically and graphically, Zombie Shooter 2 looks like Diablo 2 run through a movie filter. And the effect works nicely. Blood and a few other select in-game objects are colored while the rest of the screen is in a muted black and white.  Since Zombie Shooter 2 is self-proclaimed a “casual adult game” it doesn’t take a graphical powerhouse to enjoy the mayhem, even though at times the screen can be packed to the brim with enemies just waiting for an opportunity to eat your face. Don’t be surprised if you dump 1000 bullets from your machine gun (or more) into an angry mob of zombies before you can stand alone as the victor in a pile of goo. 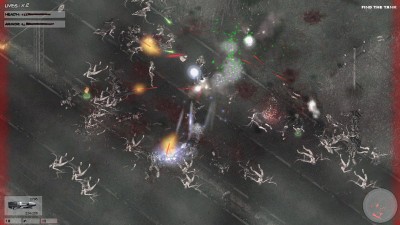 Though the game starts off rather easy, the difficulty ramps up fairly quickly as you become more and more outnumbered.

After slaying enough baddies, players can upgrade their stats like a standard rpg, but without the very diverse classes as you find in the Diablo series, each play through will feel relatively the same. A little different, but not really enough to warrant multiple playthroughs.

But the graphical style isn’t for everyone. Some may not be able to play with the “dated” look. Others will welcome its classic simplicity appeal with open arms. There are a few poorly animated sequences in the game. Sadly, the biggest offender is the running animation. When running, the characters only seem to move their legs from the knee down. At first, it’s a bit distracting and whether or not you can get over this flaw will depend on a gamer to gamer basis. I also noticed an annoying weird glitch when climbing ladders. Otherwise the guns, explosions, and the zombies themselves are more than enough to satisfy anyone who misses the top-down action genre.

While the top-down screen is reminiscent of the Diablo / Titan Quest series, there is little to no-side exploration. The gameplay is relatively straightforward. On the downside, no exploration. On the upside, there’s no getting lost either, and you can spend your time just mowing down badguys.

I loved the soundtrack found in Zombie Shooter 2. It’s reminiscent of the trip-hop / trance sound of Half-Life 2 when the action ramps up. The tracks are all perfect for over-the-top, Hollywood action montages, and that’s why they fit so well within this game. 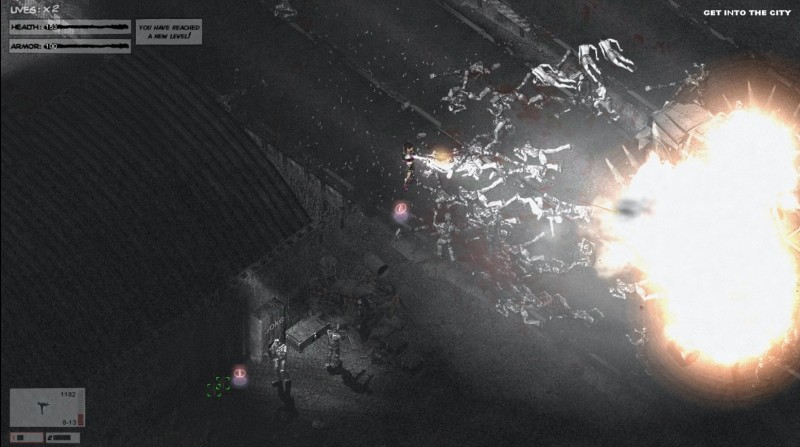 All the shells from my handgun and submachine gun are still on the ground, mixed in with the "dead" zombies. And what zombie game would be complete without exploding barrels?

The acting and storyline in Zombie Shooter 2 are atrocious, even for zombie movies. The good part is, you aren’t playing ZS2 for its gripping storyline or for its witty Tarentino-esque dialogue. It’s a great game to pick up and  play in small bursts and it’s a great way to kill a few hours. Sadly, I don’t see ZS2 as a marathon-type game but it’ll definitely please its intended audience.

Zombie Shooter 2 is a flawed experience, but it’s also a lot of fun, and I’d be lying if I said it was for everyone. Graphically, it suffers from a few hang-ups and it doesn’t compete with current generation “standards” for gaming, but it definitely holds its own as an adult casual title. I loved the music, the huge weapon variety and I really loved the explosions. It’s a great game to turn off your brain, and just have some fun. So if you’re pining for the “good old days” when top-down action-rpgs were king, then Zombie Shooter 2 might be worth looking into.