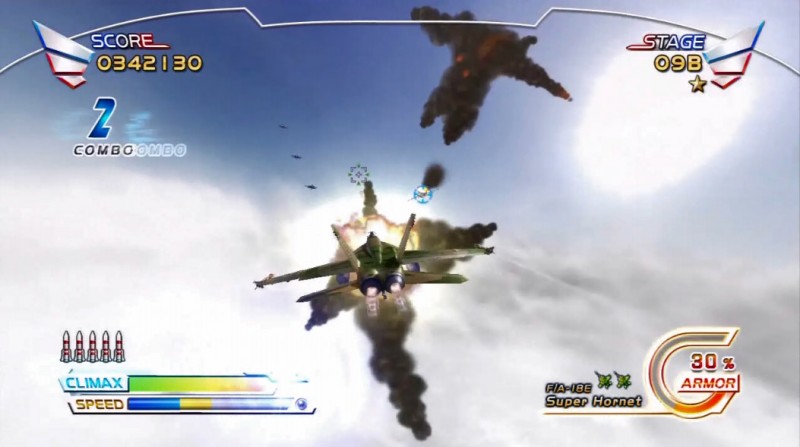 The 2006 arcade title After Burner: Climax has soared its way onto Xbox Live Arcade and the Playstation Network. This long running-series may have been worth your quarters in the arcades, but is it worth your dollars on the home consoles?

Nostalgia is a powerful marketing tool as evident by the reinvention of J.I.Joe, Transformers and the A-Team. But what generation nostalgia loves more than anything are re-releases or re-imaginings of their favorite games from when they were kids. Just look at 1942: Joint Strike, The New Super Mario Bros., Bionic Commando Rearmed, TMNT Arcade, and the constant re-releases of one Final Fantasy game after another.

SEGA appears to be going after those nostalgia dollars with After Burner: Climax, but there’s a large age gap when it comes to the After Burner video game series. A good number of elder-geeks who are now in their 20s weren’t alive to witness After Burner‘s heyday, during the height of popularity of arcades.

If you want to see an original After Burner machine in action, check out Terminator 2. (Thanks to DeVstatrOmga for pointing that out!)

The original After Burner wasn’t your run of the mill stand-up arcade cabinet, though a few upright models did exist for smaller arcades. Real arcade fans will remember the sit-down consoles that consisted of an entire jet cockpit complete with a force feedback flight stick. The entire cockpit would rock back, forth and side to side with the movements of the plane on screen. Gamers instinctively knew that the trigger was for the machine guns and the big red dangerous looking button for the thumb was definitely for launching your missiles. When your F-14 Tomcat was shot down, the entire simulator would shake violently as the jet crashed into the environment below, making the loss of your quarter a thing to salute.

In 2006 SEGA released After Burner: Climax for the arcade. But, since arcades are effectively dead in the United States, they ported the title over to Xbox Live Arcade and the Playstation Network on April 21, 2010.

Players choose between the F-18 Hornet, the F-15 Eagle, and the F-14 Tomcat for their at-home shoot-em-up experience. Enemy jets come directly at the player in large numbers and can be shot down either manually with the machineguns or automatically with missiles after a lock has been achieved. When the climax meter is filled, players can lock onto several targets at once in slow motion, then quickly eliminate an entire squadron of planes in one fell swoop. 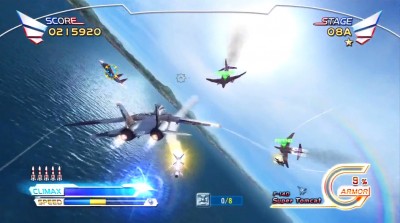 It's pretty. It's fast. But the action is too short lived for the pricetag.

Graphically, After Burner: Climax holds its own, especially for a downloadable title. The jet models all look fantastic and the explosions feel pretty good… most of the time.

For some levels, the ground is simply a repeated texture, on others, you need to be very conscious of your surroundings as you weave through canyon walls. There’s even a level that is heavily reminiscent of the death star exhaust port run in Return of the Jedi.

On the downside, the levels themselves are very short and play very quickly. VERY quickly. In fact, you can probably finish a round of After Burner within 30 minutes or less. As you play the game, you unlock what the game calls EX options that make the game easier and easier by providing the player auto locks, constant firing machineguns, increased numbers of continues and automatically launching missiles.

Arcades forced players to improve their skills because if they died, their 25 cent investment went down the tubes. In order to continue, gamers would have to dig through their pockets for another quarter to keep playing. But at home, you can just hit the “continue” button ad nauseum. The stick and carrot method doesn’t work as well at home as it did in the arcades and the result feels like something important has been lost in translation.

Another thing that feels totally lost with this game is actually the use of the controller instead of a flight stick. Granted, After Burner is hardly a flight simulator, but replacing the rumble of an entire cockpit with a gentle buzzing in your hands just feels… sad. 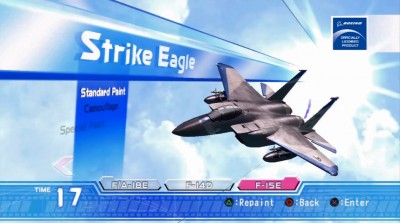 The F-15 Eagle was my favorite jet when I was a kid. I was happy to see this as a playable choice.

So it’s unfortunate to see such a mighty series crash and burn. While we love the concept of bringing this generation of gamers a new After Burner game, the execution needs something more to keep players interested. After Burner: Climax is pretty to look at, but that’s where the attraction ends.

If you’re feeling the nostalgia itch, refrain from rushing out and downloading this title. $10 could have bought you either 20 or 40 plays of After Burner in the arcade. We guarantee you won’t be clicking the continue button that many times. Your nostalgia itch will have been scratched long before then.