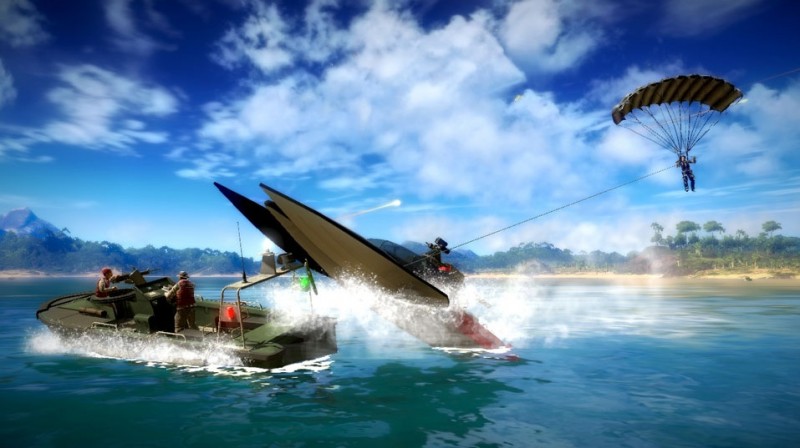 Just Cause 2 was designed by the government to pacify the masses and prevent people from getting anything done.  That’s just a theory, though.  I might be wrong.  But the ludicrous amount of time one can sink into this game in one sitting is simply astonishing.  It’s sandbox mayhem at its finest. 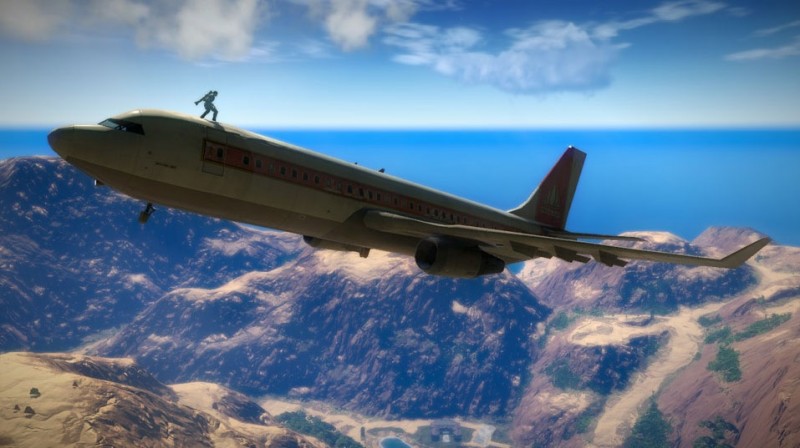 I rode on the roof of a plane today. What did YOU do constructive with your time?

The game follows Rico Rodriguez, an operative for the ‘Agency’ assigned to the small island nation of Panau.  The plot quickly becomes boring and predictable and you’ll find yourself avoiding the story missions from the get-go.  The writing has all of the faults of a B-movie script but none of the quirky charm that comes with it.  However, it doesn’t break the game seeing as the entire game world is open to you right from the start.  Players will be able to enjoy dozens of hours of gameplay without ever completing a single mission.

Normally, a poorly written plot and repetitive missions would result in a mediocre game.  But seeing as Just Cause 2 doesn’t force you to play through the plot, the quality of it is moot.  You’ll want to play a few missions because there are several that are brain-blastingly awesome, but most of them boil down to attacking a location, eliminating a target, or rescuing someone. 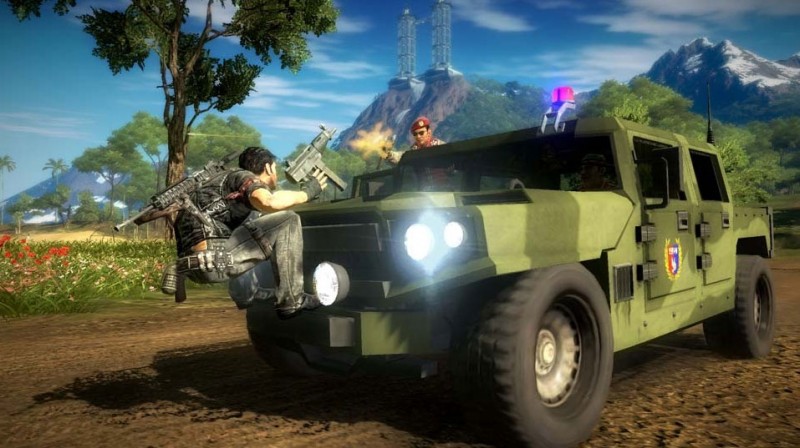 Riding on the front grill of an enemy's humvee... Brain-blastingly awesome.

The problem is that it takes enormous discipline to play missions.  On your way to any given location, you’ll come across buildings to destroy, Colonels to assassinate, and general insanity of which you must partake.  After 10 hours of gameplay, most will have only completed a handful of missions because the amount of stuff to do and the size of Panau is staggering.

Aside from the story missions given to you by the Agency, Rico can assume the role of Scorpio, a gun-for-hire, and complete tasks for any of the three factions on the island.  Working for one particular faction over another doesn’t hold any inherent benefit, and in the end it’s just a way to cause a bit more chaos and earn some more cash.

As for getting around the 400 square miles of game world, your most invaluable tool will be the Grapple.  With a range of several hundred feet, it makes scaling mountains or crossing bodies of water a cinch.  Using it in conjunction with your parachute allows you to travel miles in minutes without ever resorting to a vehicle.

Another important gameplay aspect is the Stunt Jump feature.  Using it, you can ‘ride’ the tops of cars, trucks, and planes, moving around and using the vehicle as cover.  This allows you to jump onto an enemy vehicle during a high-speed chase or grapple onto a passing plane to escape your attackers.

In addition to allowing you to grapple onto any surface, you can also ‘Dual Hook’ by attaching the grapple to two separate surfaces.  Doing this, you can tie enemies to vehicles and drag them until they’re dead, pull down statues of the Panauan dictator, or do anything else that might come to mind. 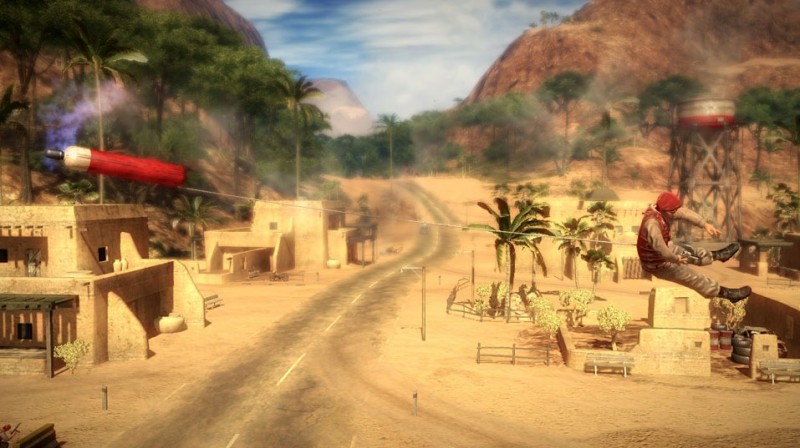 Yes. He's attached to an oxygen tank that's flying away. Again... what did YOU do constructive today?

Alongside your grapple is a modest arsenal of weapons, all of which can be upgraded, and over 100 vehicles, which can also be upgraded.  Parts can be found in supply drops scattered around Panau and they’re awarded for completing faction and story missions.

Always at your beck and call is the Black Market Dealer, who can deliver weapons, a select few vehicles, or airlift you to any previously discovered location on the map.  It’s quite a useful feature, but you can only buy one weapon or item at a time, making it tedious to replenish all of your ammo before a large firefight. 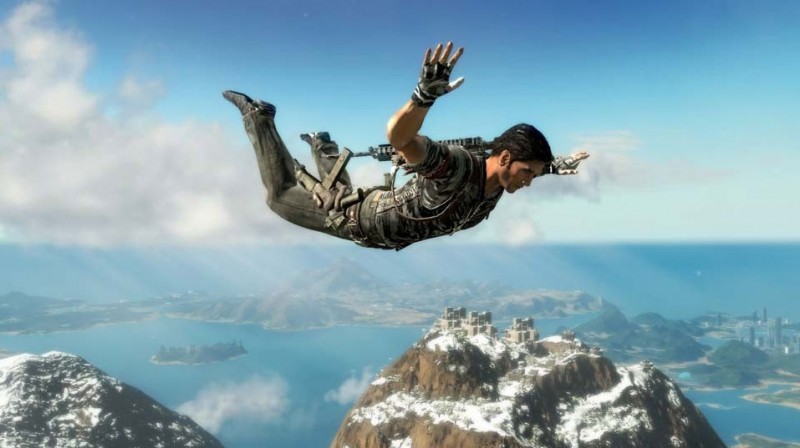 You can visit every single location in this picture without a single loading screen. And you can do it all by any means of travel you can probably imagine... except teleportation.

Enemies absorb unreasonable amounts of damage before finally dying, but the game gives you an unfair advantage should you have access to a mounted gun, all of which have infinite ammunition.  Grabbing one and removing it from its stand will hinder your movement, but it will allow you to take down enemy and structure alike in seconds.  Cannons, machine guns, and rockets on tanks, helicopters, and jets also have unlimited ammo.

The game must be commended for realizing that its strongest point is destruction.  While other games might have imposed limits or required you to do more in order to wreak havoc, Just Cause 2 lets you off the leash after the first 20 minutes and from there on out, the game is what you want it to be.  The world is chock full of Easter Eggs and interesting locations and while several military bases do look identical and players will quickly fall into a groove, none of that seems to matter when you blow up an oil rig or bail out of a 747 just before a mid-air collision.

Just Cause 2 is available for the PC, PS3, and 360 but the platform of choice is definitely the PC.  Thanks to a free modification known as the Bolo Mod, players can enjoy unbreakable grapples in infinite numbers.  As a result, PC players are able to do things that console owners can’t like tethering two planes permanently together in flight. Or gamers can web teams of enemies to the rafters and street lights Spider-Man-style. If Eidos knew what was good for them, they’d release the mod for the consoles and sell it as DLC.

If you’re debating which console to play it on, the PS3 version is the best, as it features a capturing mechanic that allows you to save clips to your HDD or upload them directly to YouTube.  There’s even a way to have the game constantly recording so that when you pull off that one-in-a-million stunt, you can automatically save the past 30 seconds of footage. 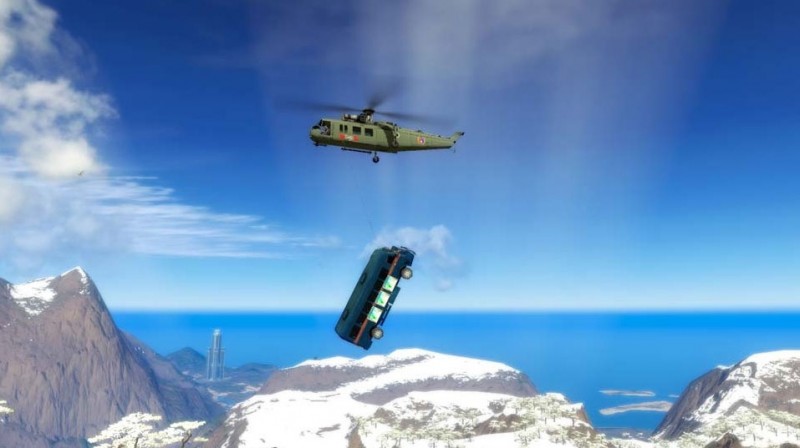 Some of you may be wondering, "Why would you attach a bus to a helicopter?" I think the real question is, "Why WOULDN'T you?"

The thing about Just Cause 2 is that you will always end up playing longer than you intended.  You always see one more vehicle you want to try. There’s always one more crazy stunt to try. A rental might be wise for those who aren’t particularly font of sandbox shooters, but for everyone else, this is a must buy.  The longevity of the game more than justifies the price tag and it’s the kind of game that keeps on giving.

2 thoughts on “Just Cause 2 Review”