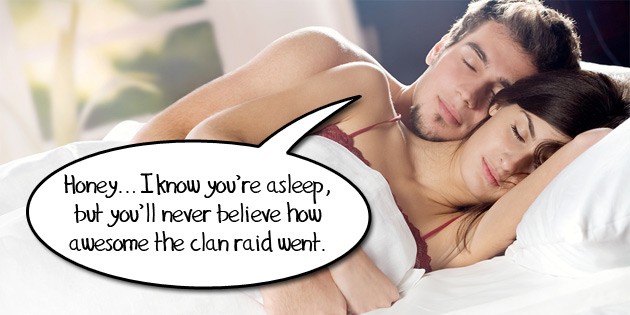 That’s it. You’re busted. It’s 3 AM. You’ve completely lost track of time playing while playing World of Warcraft, Battlefield Bad Company 2, Mount & Blade, Mass Effect 2, Sims 3, or pretty much any other number of games that make time flow faster than it naturally should.

You now have to turn off the lights in the game room, slink slowly across the living space in the dark, and head to bed where your spouse is sleeping…

If you manage to surgically implant yourself under the blankets without waking your spouse, you’re home free. You only have to deal with the inevitable headache that is going to haunt you through the work day which starts in less than 5 hours. For that, coffee, Red Bull, and 5-Hour Energy shots are your only hope for survival.

But what if you do get caught? What if your spouse rolls over and asks that terrible question, “Are you just coming to bed NOW?!” While the truth will set you free, sometimes a little white lie will save you a ton of grief later in life. When your spouse unexpectedly brings up “guess who was up until 3AM this week playing video games?” at your next social outing, it’s difficult to laugh off. The best you can do is try to change the subject or make a trip to get more beer.

Excuse #1. What you should say…

“My stomach is messed up.”

I’ve asked most of my married gamer friends what excuse they use for coming to bed too late. To most of them, this was their canned excuse.

“My stomach is messed up.” Five simple words that will save you from a ton of grief. 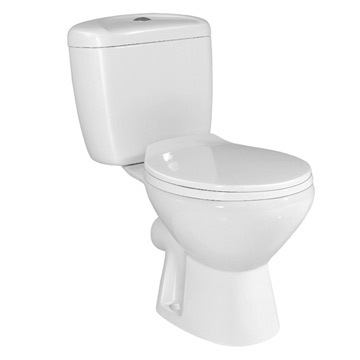 No, you’re stomach isn’t actually messed up. You’ve just put in some quality game time! But in your spouse’s eyes, clearly you haven’t been gaming at all. You’ve been white-knuckled, gripping anything nearby for support while you fight your intestinal forces of evil. Your spouse can’t help but feel sorry for you. While they’ve been happily sleeping in the comfy bed, you’ve been praying for the sweet release of death in the restroom. This excuse can be supplemented with “I hope it wasn’t something we BOTH ate.”

Your spouse will lean over and say, “Aww, I’m sorry honey. I hope you feel better.” Kiss you on the cheek, roll over and all is forgotten.

Your spouse may be on to you. Or your spouse might grow increasingly worried about your health. You can’t use this excuse more than once per two weeks. If you use this excuse too much, sympathy may be washed away and crankiness may kick back in. You ‘ll start to hear things like, “Well, it’s because you eat like crap. You eat too many Doritos.” Or, “Maybe you should see your doctor.”

Whether or not you eat too many Doritos is irrelevant. Chances are, you probably don’t. And if your spouse happens to make an appointment with a virologist for you, good luck explaining to the doctor that you’re perfectly healthy and that you’re only up late because like any other gamer, you enjoy dropping an occasional hot Carl Gustav on your enemy’s tanks. 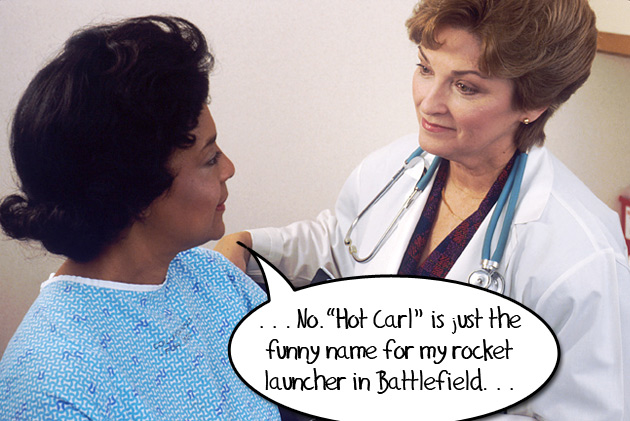 Still, you don’t want to throw one of life’s little niceties like Doritos under the bus just to salvage gaming.

Excuse #2. What you should say…

“I thought I heard someone at the door.” 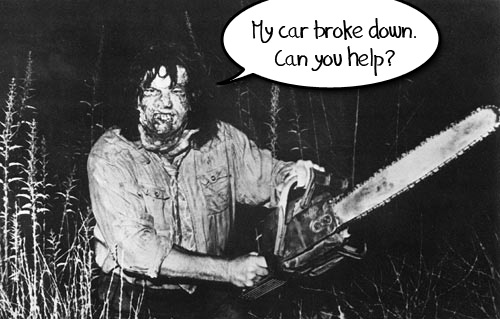 This response must be immediately followed up with “… no… There’s no one there. I’m going back to sleep.”

Your significant other will roll over and completely forget the ordeal.

Again, this excuse must be used with extreme caution. This can only be used once in a two-month timespan. If you continually come (back) to bed at 3 AM because you’re hearing knocks at the door, you’ll either be diagnosed with paranoia or somnambulism (That’s a big word for sleep walking. Yea… I had to look that one up.).

Worse still, if you use it too much, your spouse may become worried about potential break-ins at 3 AM. That’s when things really get out of hand. Your spouse will talk about bettering your home protection initiatives. While the idea of purchasing a few new guns for the home might sound fun, but before you know it, you’ll be arming and disarming your elaborate home security system every time you open a window. And you’ll be picking up dog poop from the incredibly large German shepherd that was purchased to patrol the grounds.

So… discretion or dog poop. It’s your choice.

Excuse #3. What you should say…

“I was just doing it to catch up with my brother / sister / old college friend / etc.”

This is one of my personal favorite excuses, most likely because it’s true 90% of the time. As we grew up, most of us have moved away from our perspective homes, or our friends and family have moved away from us. It’s important to keep in contact, and what better way to do so than through some quality frag time? Everyone knows that families and friends that game together, stay together. 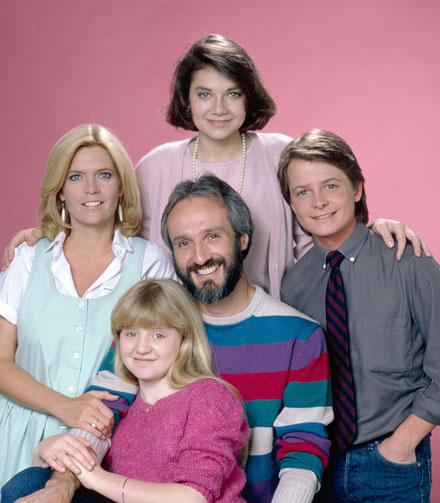 Your spouse will roll over and completely forget the ordeal but you’ll probably catch a verbal warning… and an unsteady glare.

I highly suggest not using this excuse in a lie. You may get questioned about the life events of your fellow gamer. If your spouse is anything like mine, you’ll be asked for information about the status of your friend’s relationship with their significant other, baby weights, wedding dates, names, locations and other stuff that I generally hear but forget within 30 seconds.

Here’s where you’ll come to a trouble crossroad. You’ll either catch hell for not asking enough questions about the lives of fellow gamer or you’ll get an earload for staying up too late. Pick your poison.

Excuse #4. What you should say…

“I just couldn’t sleep and I didn’t want to wake you up with my tossing and turning.”

Ooh. Aren’t you the considerate one? This little lie works even better if your spouse has something big planned for the next day like a presentation or an athletic competition of some sort.

This is probably the best excuse to give you are going to bed in the “ridiculously early” hours of the morning between 3:30 AM and 6 AM. For the love of God, get in the bedroom before your spouse wakes up for work.

Your partner will thank you for your consideration but still look at you like you’re an insane person.

Your partner will say “Thanks for not trying to wake me up, but you still did.”

It is nought good a slepyng hound to wake.

Some people are just plain cranky when you wake them up. You may get grilled no matter what. So, receive a tongue lashing for your attempt of consideration or your late night gaming. Or… you could just sleep on the couch. Depending on how mad your spouse gets when they wake up, it might be best to go with option #3 and then suffer the backache in the morning.

Excuse #5. What you should say…

This excuse is nearly bulletproof… unless the sounds of your gunfire and exclamations of “take that you f*#%ing newb!” have already been keeping your spouse awake. Putting in some extra (fake) hours for the office runs the potential of making you look like a go-getter.

Your significant other will probably say “Oh… I didn’t realize you brought any work home today. Why didn’t you say anything before I went to bed?” This is easily brushed aside and before you know it, you’ll pass out on your comfortable mattress. 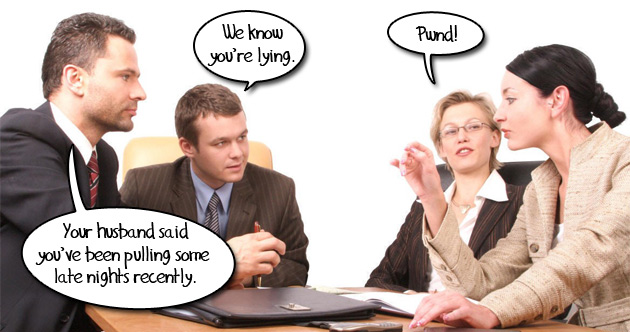 If you keep “burning the midnight oil,” your spouse may start to hold a grudge for your employer whether they deserve it or not. This is never a good thing since they’re probably your main source of income and it’s best to not stir the pot with them too much.

Heaven forbid if your spouse brings it up at a work gathering later.

Excuses you should never ever say. . . ever.

“I was in an argument on the forum boards.”

“I was just up thinking about how much I love you!”

“I was catching up with friends on Facebook / Twitter / MySpace. By the way, I friended my ex-girlfriend / ex-boyfriend.”

And never ever try the Jedi mind trick. While during normal waking hours of the day, your geeky humor may get a chuckle out of your spouse, but 3 AM is “no time for your shenanigans.” 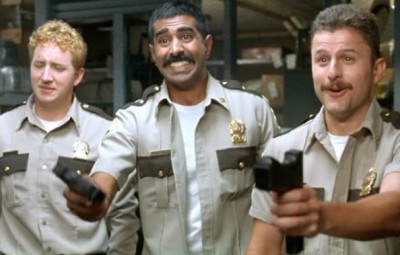 And then you’d have to stop yourself from laughing at her bringing up an obviously funny moment from Super Troopers. You’re better off using some of the approved excuses listed above. Or use the truth. That sometimes works too.