This is only part one of a four part series. Part 1, which you’ll find below, focuses on Sony’s answer to Motion Gaming, the Playstation Move. Part 2 will take a closer look at Microsoft’s Project Natal. Part 3 will look to Nintendo and their contributions to the motion gaming genre, both past, present and future. And part 4 will look at all three in an effort to compare and predict the outcome of the motion wars, as well as try and imagine what motion gaming on a whole will look like next generation and beyond.

The Move was first announced at E3 2009. There Sony was met with mixed reception do to what seemed like a hacked together presentation showing tech demos and a prototype Move controller. In fact the announcement was so rushed that they didn’t even have a proper name for the product. Since the initial announcement, the Move went through several branding rumors, from Arc, Wand and Sphere, to its current name. 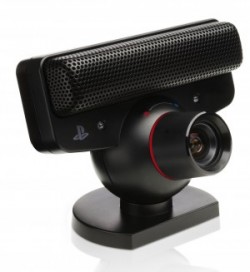 No changes will be made to the original Playstation Eye design for the Move relaunch.

The Playstation Eye has been around for a few years now and since launch been largely abandoned by developers as a viable gaming platform. It follows in the footsteps of the EyeToy for Playstation 2, the grandfather of console motion games. But after the initial success of the Playstation Eye, developers and gamers alike lost interest, much like the EyeToy. Now however Sony has resurrected the Eye with games like EyePet and of course the future Move motion control.

The Playstation Eye (PSEye) is quite the impressive little camera when compared to similar devices within the same price range. It can capture video at up to 640×380 resolution at a frame rate of up to 120Hz. To compliment this, the Playstation 3 is equipped with software to detect rough body and facial movements with a speed far above that which the human eye can detect. The Eye also features a microphone array with four directional microphones, capable of such feats as voice recognition, echo cancellation and noise suppression. The Playstation Eye will truly come in handy for any number of imaginable motion controlled games.

It might look at bit silly, but the glowing sphere is essential.

Then there’s the Move itself. Though the technology was just announced last year, it’s been around for a good 10 years within Sony research and development, specifically the glowing orb situated at the tip of the controller. It is used to give the PSEye something bright to look for, giving the PS3 very precise positioning data. Because the sphere is of a known size to the PS3, the PS3 can precisely detect the position of the device in full 3D, determining the distance of the sphere by its relative size.

It changes color for two reasons. The first reason is to make sure that the color of the sphere isn’t the same as the background, thereby making it easy to distinguish. Secondly, it gives the player active visual feedback, allowing in-game events to have an effect in real life. For additional feedback it has a rumble motor, something anyone with a DualShock or Gamepad controller is familiar with.

But that’s not all. It also features an accelerometer to detect movement, direction, and speed in cases where the glowing sphere is off-screen (such as behind your back.) It also has a rate sensor; much like the SixAxis gyroscope, only more accurate. This is used to detect rotation by twists and turns of the wrist. The rate sensor combined with the positioning data from the glowing sphere allow for “sub-pixel” accuracy in aiming. To top it all off, it also has something called a magnetometer which is used to correct any cumulative errors that might build up in the other sensors.

Of course, you also have your standard Playstation Face buttons, and a pressure sensitive trigger button designed to simulate pulling of a trigger or grabbing an object. New to the family, however, is the Move or Action button (depending on who you ask). As of the time of this article it is unclear what primary purpose this button will have. 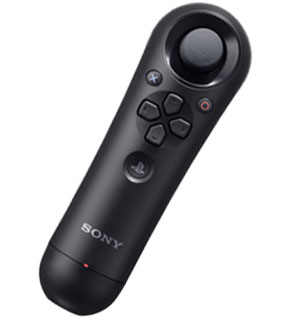 The branding might not be simple or elegant, but the design is.

As a supplemental device Sony has also included the Navigation Controller, it’s propose, obviously, is to help the player navigate the game world. It replicates the function of the left side of the Dualshock3 and SixAxis game controllers. So much so that if you don’t want to buy one, you can always just use a standard Dualshock3 instead. It features an analog stick, the basic Playstation directional pad, the circle and cross Playstation face buttons, the L1 and L2 triggers, and the trademark Playstation button. Unlike its Wii counterpart; the nunchuck, the Navigation Controller doesn’t have any motion sensing capabilities. Instead it functions purely as a supplemental device for certain gameplay styles.

During Sony’s Move showing at GDC 2010, the Navigation Controller was only used for one game; SOCOM 4. Players used it to navigate the environment while controlling the aiming and turning with the Move controller. The few who got to try had mixed opinions, some saying it controlled just like a Wii game would, other applauding the use of more accurate gestures.

Since the Move isn’t out yet, it’s hard to judge its software lineup, but so far we’ve been given a list of 17 upcoming games. Eight existing games will be patched in the future to use Move technology. This brings the grand total up to 25, with more to be announced at this year’s E3 (June 15-17, 2010). Among the current games we’ve seen is a sports compilation game, a boxing game, a rail shooter, and SOCOM 4. Sony is aiming to please all corners of the gaming audience with Move, clinging tightly to its core gamer base with solutions for traditional hardcore games. But despite that, what they’re ultimately hoping to gain is some of the casual audience that Nintendo captures with the Wii. Only time will tell if they succeed or not, but that won’t stop me from making a few predictions come part 4 of this series. Stay Tuned!