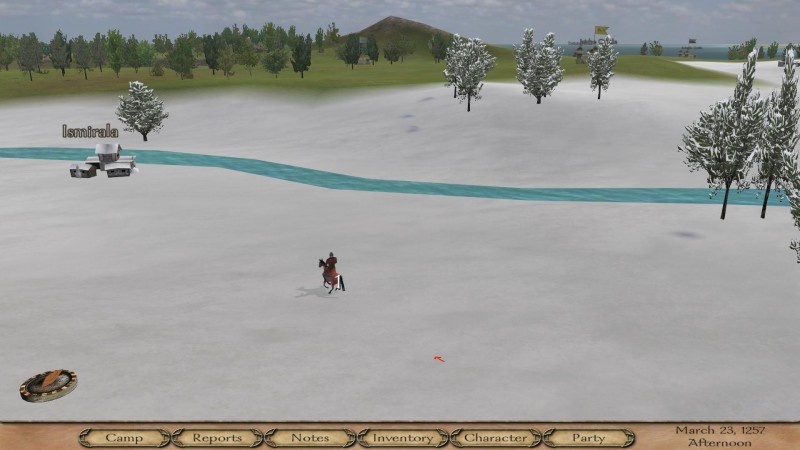 I had access to the Mount & Blade: Warband beta. And I have to admit, I was less than impressed.

Graphically, Mount & Blade: Warband is a nightmare even with the visual improvements the developers reportedly implemented over the original Mount & Blade. Comparatively, it’s graphical equivalent is the original Half-Life or something else from the late 90’s / early 00’s during the “butt-ugly” pubescent phase of 3D gaming. The menus are basic to say the least. There is no voice acting. There is only text and blocky graphics. 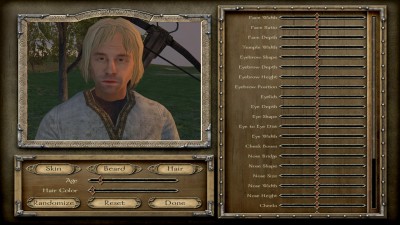 At first, I couldn't find anything redeeming in Mount and Blade: Warband.

I kept asking myself, “What the hell is the mass appeal of this game? Why are there so many rabid cultists following this title? I’m a gamer of almost 30 years. How am I not part of this ‘in’ crowd?” I found myself only able to sit with the game for 20 – 25 minutes at a time. After a while, I just stopped thinking about the game. Afterall, I had a kill ratio to keep up in Battlefield Bad Company 2 and I still had about 1,000,000 more colonels to assassinate in Just Cause 2.

Then I got my hands on the full version of the Mount & Blade: Warband. I decided to give it an honest-to-god second try. I’m glad I did.

Mount and Blade: Warband is a great game. It’s fantastic. It’s addictive. I want to take a day off of work to do nothing but play it. For the past few nights, I forcefully had to to stop myself from playing and go to bed sometime before 3:00 AM. (Don’t tell my wife. She’d kill me if she knew what time I was coming to bed. I’ve been using the excuse “Oh, I’m just coming back from the bathroom” when she catches me.) I foresee many more near-sleepless nights to come because of this game, too. But that doesn’t mean that every PC gamer that’s vaguely interested in this title should drop what they’re doing and run out and buy it.

At first appearance, many gamers might confuse Mount & Blade: Warband with a poor man’s Oblivion or Morrowind. Some gamers have asked me if it was like the Total War series. To those iquiries, I can only reply, “yea, it’s kinda like that… but not really.” While the leveling experience is similar to Oblivion–the more you use a skill, the faster it increases–and tactically, it can be very similar to Total War games, the closest game I can think of to describe Mount and Blade: Warband is Sid Meier’s Pirates!. 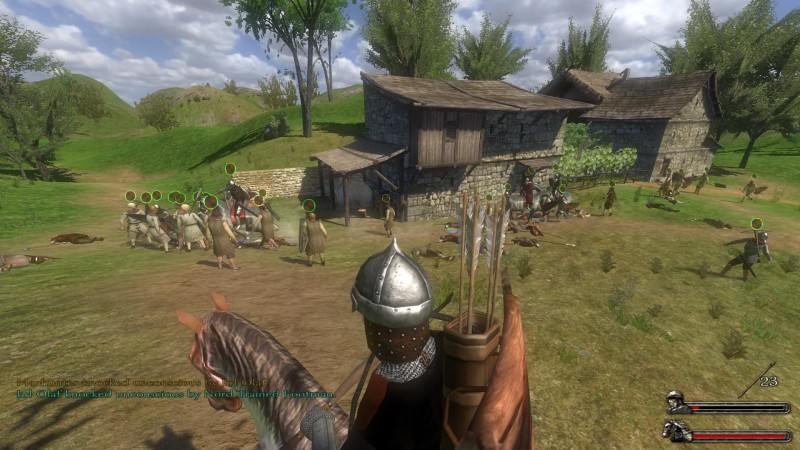 You start the game as a single soldier looking to prove himself in the world. It’s just you, your sword, your crossbow, and your horse. The rest of your digital life is in your hands.

One man alone cannot fell the gigantic armies of your enemies. It’s up to you to amass a force to be reckoned with. You can ride your horse from town to town and ask for strong armed men to join your cause. Some towns will be able to offer a few men to help out. Once a soldier is in your party, you’re in charge of their weekly monetary allowances, their training, their health, and their food supply. From there, your army will follow you into hell itself if you’re a strong enough leader. Maintaining an army isn’t easy… or cheap. To keep your army fat and happy, you need cash. Raising money is difficult at first, therefore raising an army is equally difficult. But good things come to those who wait.

Income can come about several ways. You can always find a king or a lord or a duke who is in need of a favor or two. Doing missions for kings and lords grants you increased fame in those parts of the world. While gopher missions can get a little boring, sometimes you’re asked to retrieve someone’s head, or many people’s heads. Or if you want to live the live of a brigand, you can always pillage a village or two.

Then… it’s time for war.

Unless you are attacking a specific city or town, armies clash on gigantic, randomly-generated fields of battle. The battles take place in real time as your soldiers fight for their own survival. At first, most battles start as a sheer numbers game. Your five crazy villagers with pitchforks will stand no chance against a well trained army of 75. But in time, your army will grow and you’ll need to develop a more tactical approach to the fights when the armies are equal in training and in number. 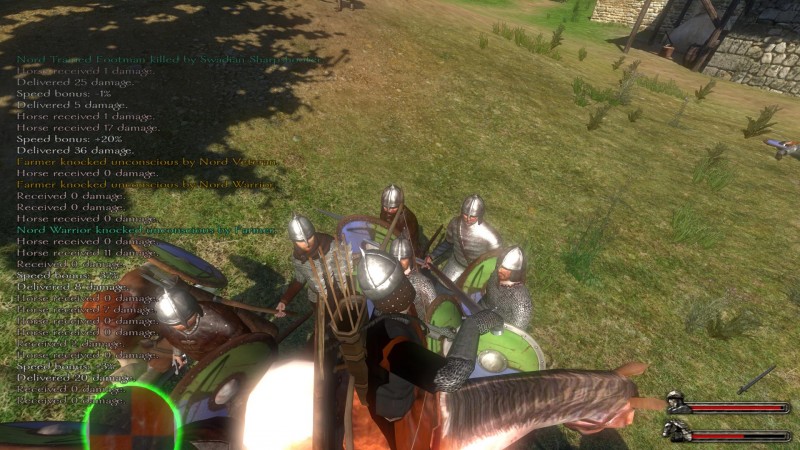 Surrounded on all sides. Horse is almost dead. Your infantry is just about to reach you. This gets exhilirating!

The outcome of any battle can go one of three ways.

1. Victory: Congratulations! You and your army have slaughtered your enemy and you revel in the spoils of war. You now own all the weapons and armor of your former enemy and you can sell them at the local smith or trade the items for food for your army. Victorious armies also gain levels. Surviving soldiers can train from crazy pitchfork wielding citizen-warriors to a highly disciplined infantrymen, archers, spear men, and more.

2. Defeat: Way to go, dummy! Your entire party has been wiped out and you have been knocked unconscious. You are taken prisoner and are dragged across the country with your captors until you find an opportunity to escape. You then need to start rebuilding your army.

3. Retreat: Either you or your enemy has successfully retreated and bloodshed has been avoided… for now.

The combat is brutal in Mount & Blade: Warband. You can’t charge into battle expecting to take 20 arrows to the chest and then have your health regenerate if you just hide behind a rock for seven seconds. A few solid blows will raze even the strongest of men. If you find yourself too far ahead of your army, you’ll quickly be surrounded by the enemy and subsequently, your men will have to drag you from the field. Discretion, tactics, and pace are the name of the game. You need to know when to hold ’em, know when to fold ’em, know when to walk away and know when to run. Also having your archers thin their numbers before your infantry reaches their front lines helps, too. It is absolutely exhilarating when you win a battle against a team that outnumbers you. And the feeling you get the first time you attempt to siege a castle is something I haven’t felt with gaming since I was much younger. 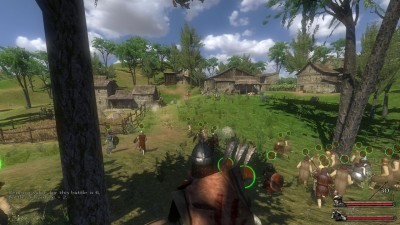 Time to take back the village!

If the Mount & Blade series got the fresh coat of current generation makeover it deserves (complete with voice acting), we’d be looking at major major contender for PC game of the year no matter what year it was presented in. It’s easily one of my favorite games of this year. I’m not a “graphics whore,” but I can say without a doubt that the visuals in Mount & Blade: Warband are the biggest setback  in the game experience. Mount & Blade: Warband is going to keep a lot of gamers very happy for a very long time. Sadly, most will never see past the incredibly dated graphics. I love this game dearly, but I know it’s not for everyone. 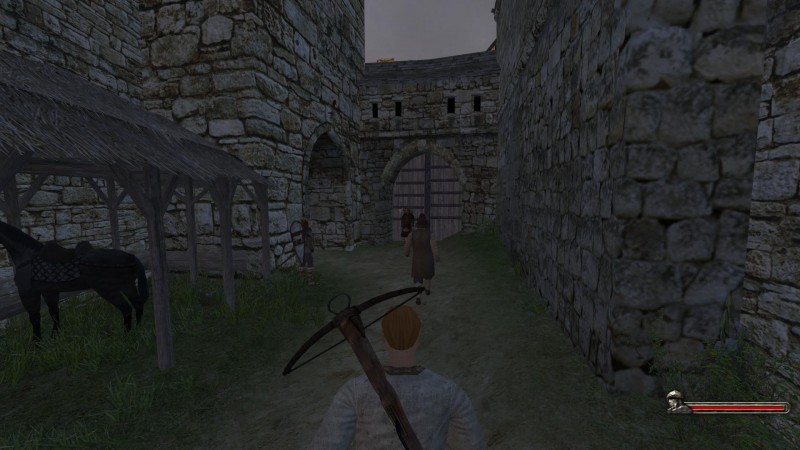 There is a lot of ugly to be seen in Warband. So be honest with yourself. If you can truthfully see past screens like this, then Warband is your next roller coaster ride.

If you can truly say to yourself, “visuals don’t matter at all to me,” or if you’re a fan of the original Mount & Blade, then there is no reason to put off purchasing Warband. It is truly a game meant for adults. Be happy you’re part of the “in” crowd.

But, as adults, we’ve seen the evolution of gaming grow past this level of detail. Most of us are probably spoiled with age, and there’s nothing wrong with that. If you don’t fall into one of the two crowds listed above, then give the demo a try before you buy. Some will be impressed into month-long gaming addictions. The rest will brush it off and move on.