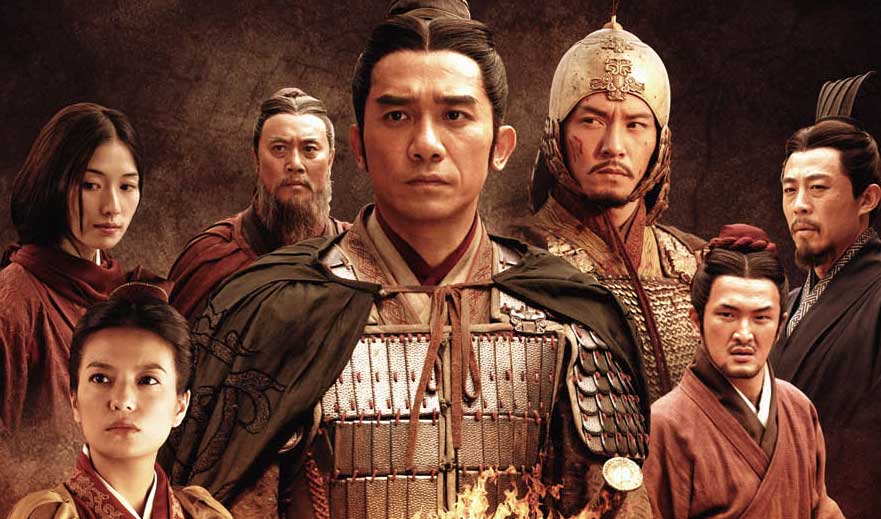 Most of you have probably seen my reviews of various Dynasty Warriors games, which are mostly based in the Three Kingdoms period of Ancient China. This time I’m going to mix things up a bit and review a film based in the Three Kingdoms period of Ancient China. Red Cliff is a film directed by John Woo and stars Tony Leung Chiu-Wai and Takeshi Kaneshiro as Zhou Yu and Zhuge Liang, the two main protagonists of the film. There are two main versions of the film. There is the two part epic released in Asia which is over four hours long, and the condensed two and a half hour version released everywhere else. This review covers the shorter of the two because this is the one more of you are most likely to see.

Red Cliff tells the epic story of the Battle of Red Cliff (also known as Chi Bi) in which Zhuge Liang effectively divides the land into three equally powered dynasties. The kind leader Liu Bei allies himself with the inexperienced Sun Quan and together they do battle with the tyrant Cao Cao on land and sea, even though Cao Cao’s army outnumbers theirs greatly. Even though about half the movie was cut out for the release outside of Asia, the story is very much intact and if I didn’t already know it was cut down from the original release, I would not have been able to tell.

One thing that makes the story flow very nicely is how the main characters are introduced. When they first appear their name is shown next to them. Normally I would say that practice seems tacky and unnecessary, but since there are so many characters it helped me to grasp the story early on and not have to worry about figuring out whom the characters were based on the subtitles alone.

This looks great in HD

Even though the story flowed smoothly despite the heavy editing, there are still a few small things that disappointed me. In the Romance of the Three Kingdoms novel Pang Tong suggested that Cao Cao chain his ships together to reduce seasickness among his troops and in Red Cliff a similar idea is thought up by two of Cao Cao’s naval generals. Granted, Pang Tong’s role in the Battle of Red Cliff is a fabrication, but I was looking forward to seeing his animated personality in the film. You could make the argument that the film is trying to be historically accurate, but other fictional events occurred in the film that either only happened in the novel, or never occurred at all. Overall I wanted to see either a (mostly) historically accurate film, or a film based on the Battle of Red Cliff in the Romance of the Three Kingdoms novel. Red Cliff is more or less a mash up or both, showing historical facts in some scenes, and fiction in others.

The other disappointing aspect of the film is while it introduced most of the main generals in Liu Bei and Sun Quan’s alliance, it failed to mention any of the noteworthy generals in Cao Cao’s army. Some of them are there, but they are never introduced during the film which makes Cao Cao’s army seem much less threatening than it is supposed to be. Also, some of the key players in Sun Quan’s army are never introduced even though they play key roles in the battle. Neither of these points are deal breakers by any means, but they are worth pointing out.

Almost everything about this film really makes the story come to life. First and foremost is the cinematography. You will notice that throughout the film there are some great shots of the scenery that really stand out, especially when they are viewed in high definition. The other notable use of camera work is during the battle scenes. The battle scenes are first shown from a top down perspective so viewers can see just how large the armies are and exactly how Zhuge Liang’s and Zhou Yu’s strategies are going to work. Once that has been established, the perspective goes up close and personal and usually shows the noteworthy generals showcase their fighting talents one at a time which never disappoints. Even though the cinematography in Red Cliff is not really anything out of the ordinary, it works and compliments the film well.

When I watched Red Cliff I opted to read the subtitles over hearing the dubbed version. Even though I could not understand what anybody was saying, from what I could tell the acting was really well done. The cast is well chosen and all of the actors and actresses fit their roles’ personalities very well. For example, You Yong, who plays Liu Bei, is kind hearted and gentle as Liu Bei is often portrayed as being, and Takeshi Kaneshiro, who plays Zhuge Liang, is calm and level headed even in the most desperate situation. Overall the acting is top notch and very believable throughout the film.

An epic story like the Red Cliff would not be complete without an epic soundtrack. The score is mostly comprised of large, sweeping orchestral pieces composed by Taro Iwashiro, which fit right in with the movie. However, the highlight of the music in Red Cliff is not one of these epic scores, but during the two scenes where Zhou Yu and Zhuge Liang play two intense duets on the guqin. Overall the soundtrack is fantastic and it is enjoyable to listen to on its own as well as while watching the film.

Last, but definitely not least are the battles. Red Cliff has its fair share of battles and every single one is a thrill to watch. Like I said before, the battle scenes usually start with a top down view of the armies and then moves in up close to show the generals and soldiers fighting. What I enjoy most about the battle scenes is the fact that they focus mostly on the generals and their prowess on the battlefield. This is true for the fighting as well as the strategies used. There are multiple times during the film where one man decimates entire squads and when the opposing army gets caught in one of Zhuge Liang’s and Zhou Yu’s strategies and every time it made me think “Man, I wish I could do stuff like that in Dynasty Warriors!” It is one thing to kill a bunch of random dudes by haphazardly swinging your weapon around, but when one man kills an entire squad with their own weapons, or tackles a horse to the ground, it becomes a whole different ball game.

Red Cliff had my undivided attention from beginning to end. I would definitely recommend this film to Dynasty Warriors fans and enthusiasts of the Three Kingdoms period as well. However, that is not to say everyone else will dislike it. The story is told in a way where you will need little to no background on the subject matter, and is very enjoyable to watch regardless if you are interested in that period in history or not. The art direction, cinematography and soundtrack are all superb and while there might be some confusion about what is fact and what is fiction, the film tells a great story and it should not be missed.