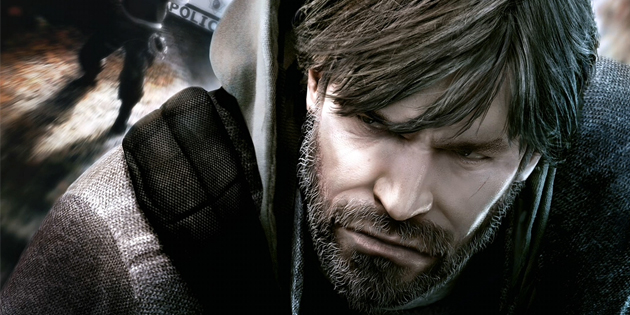 Between development and release, Sam got a few serious make-overs.

Splinter Cell: Double Agent ended with a cliffhanger that left fans chattering on the forums boards. Between the death of Lambert at the hands of Fisher, the mysterious death of Sam’s daughter Sarah, and the hurried escape of Sam from the government… gamers were foaming at the mouth to learn more about their favorite international super spy.

On May 23, 2007, Ubisoft announced the development of Splinter Cell: Conviction. It was originally given a near simultaneous release date with the original Assassin’s Creed in November 2007. Between then and now, Assassin’s Creed had blossomed into a full game franchise, but within that time, the Ubisoft Montreal team had little to show the world of Sam Fisher’s latest adventure. After three long years of delays, massive redesigns and near cancellations, Conviction has finally hit stores shelves. But is it worth your hard earned money?

Sam Fisher has been on the run from U.S. authorities after he murdered his boss Lambert during an under cover operation for Third Echelon, a contractor that specializes in highly secretive government security. His former colleague, Anna “Grim” Grimsdottir, locates him, informs him that his daughter is in fact not dead from the drunk driving car accident that Sam was lead to believe. Unless Sam does exactly what she says, he’ll never see his daughter alive again.

Sam was forced back into the game of international espionage.

While we won’t go any further in retelling the story out of fear for spoilers, the storyline of Conviction is definitely a step back in the right direction for the Splinter Cell series. It’s full of the usual betrayals, twists, turns, and plots within plots within plots. Fans of Sam’s past adventures will definitely remember this one for years to come. And for people who don’t know of Sam’s past exploits, the exposition is conveniently retold between levels and through stylish wall projects.

Splinter Cell has been heralded for years by many as being the pinnacle series within the stealth genre. The stealth gameplay has been tweaked, probably to the point of alienating some Splinter Cell purists.

The light meters from earlier Splinter Cell titles are gone. There is no HUD on screen showing players when they’re completely hidden from the enemy. Instead, Sam is shown as being cloaked in darkness when the screen turns from full color to black and white. Its an interesting execution, but when the world turns to black and white, much of the detail is lost and you’ll be praying at times for some night vision goggles.

Stealth kills are fantastically quick and brutal in Conviciton.

Sadly, Sam’s standard night vision goggles never make an appearance, which is an absolute shame. They’re practically the unofficial logo for the Splinter Cell series. Gamers, even non-fans of the series, automatically think of Splinter Cell when they see images in that green to black gradient scale as they hear the whining sound as the goggles are brought to life.

What gamers are presented with in the later part of the single player experience, are sonar goggles that can detect humans through certain walls. They’re useful for spotting enemies ahead of time. But they offer very little in terms of night vision. Sadly heat vision and electrical vision are unavailable.

While Sam has lost some of his much prized equipment, he has gained some other performance tweaks. Control-wise, this is the best Splinter Cell title in the series. When you tell Sam to move left, he moves left. When you want him to jump and grab a ledge, he does it. Take-downs, grabs, throws, sliding for cover, climbing, aiming and shooting are all immediately responsive and mapped intuitively. The controls are dead on.

Sam is also faster and more lethal than before. While he no longer carries the much-missed knife from Chaos Theory and Double Agent, Sam can now surprise enemies from the front as well as the back which results in some fantastic stealth assassinations that are absolutely brutal in appearance. But these moves portray the amount of skill Sam has accumulated over the years of being a top secret government agent. 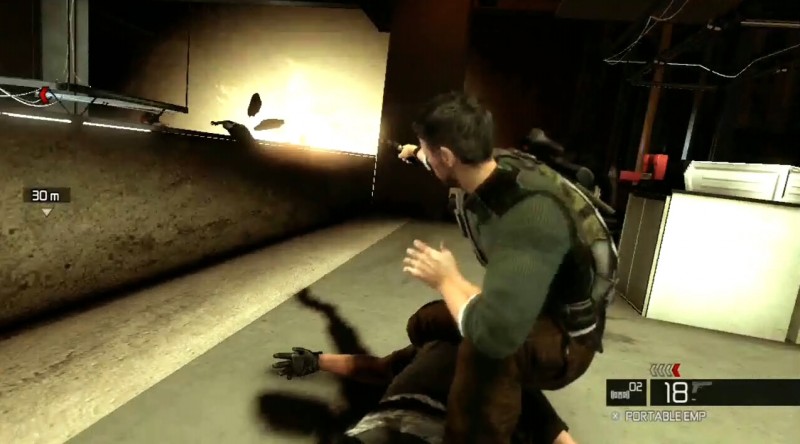 Some Splinter Cell purists will find the Mark and Execute game function to be too easy.

With a Mark order, Sam can preemptively tag multiple enemies and then with the push of one button, he’ll quickly swivel his head around and take them down in order. It’s an interesting concept and Ubisoft executes it well, but stealth purists may not like it very much since one Mark and Execute order can clear almost an entire room. On the other hand, it sure does make Sam look like a badass.

As you continue in your badassery, you’re awarded points which can be used to purchase weapons and upgrades from weapons caches found sporadically through the linear levels. Giving players the opportunity to carry the guns and ammunition they want adds a little bit of an RPG flair to the game, but then again, most Splinter Cell titles allowed you to customize your load out before beginning a mission.

Ammunition is never in short supply. Never in my playthroughs have I run out of ammunition, and there were times when I was really pouring out the lead. So, again, stealth purists may find this to be problematic. Action fans, on the other hand, will love it.

Co-op in conviction is nothing short of brilliant. Just be careful who you play with.

Conviction continues the excellent tradition of stellar co-op stealth gaming that Chaos Theory started. Players can connect through Xbox Live, system link or they can even play through split screen. The cooperative missions in Conviction are not just “tacked on” levels to artificially lengthen the game. They have some real meat to them.

The spies Archer and Kestrel can carry all the gadgets and perform all the same moves that Sam can do in the single player campaign.

Marking and executing works similar to Sam, but the pair of spies share tagged targets, making the takedowns much more massive in scale and drama.

In order to give each other more breathing room, generally the areas that Archer and Kestrel infiltrate are much more open than environments that Sam encounters. Overall, you’ll spend just as much time in the co-op as you will in the single player campaign. The missions are just as hard and the AI is just as ruthless.

The coop missions must not be missed if you’re going to own Conviction. They aren’t essential to the functionality of the game or the story, but they are essential in terms of appreciating the entire package that Conviction offers. However, since Xbox Live is the connecting factor, every gamer’s experience is going to be different.

At the time of launch, the matchmaking is less than stellar and often times you’ll be paired up with someone who doesn’t match your request. Often times you’ll play a different level than the one you requested or on a difficulty setting that you don’t want to play.

If a connection with another gamer is too slow, the game itself slows down to compensate. And it’s best to play with a friend since play style is very important in Conviction. You may work incredibly hard to sneak up on an enemy when at the last moment, your team mate busts into the room guns blazing or he’ll run through all the laser grids that you’ve been working so hard on avoiding. More often than not, you’ll be annoyed at your fellow gamer, and less at the game itself.

Graphically, the game is gorgeous as it dances seemlessly from color to black and white. I saw no clipping or low resolution texture. The lighting effects and character models are all very well done. Once or twice in the single player campaign, however, we did encounter processor slow-down during times of heavy action and radio chatter.

Overall though, very few negative points can be made about Conviction‘s visuals.

Conviction definitely pushes the Splinter Cell story in the correct direction. It’s good to have Sam back in action. While in the past, it seemed as though Jack Bauer took a few notes from Sam Fisher. This time around, it seems the roles have been reversed. Fans of the series 24 will probably adore this Ubisoft title. 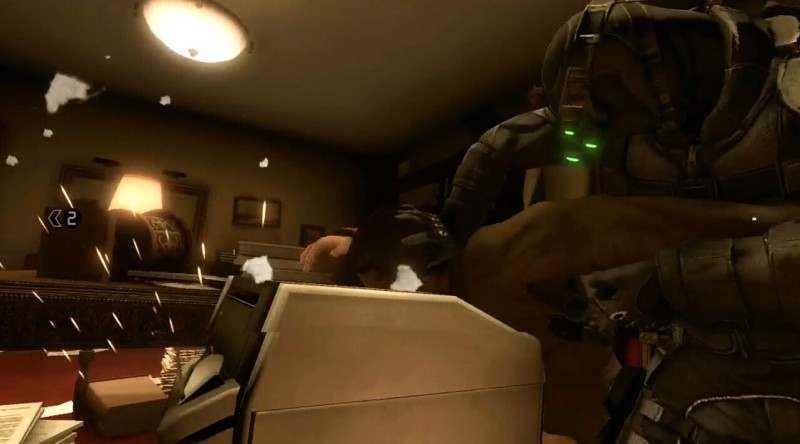 The great storyline and pristine controls should make fans of stealth games happily pick this title up. Even though it strays a bit from the standard stealth formula, there’s still plenty of fantastic sneaking to be had. With a more agile character and new ways to dispatch your enemies in silence, you are now the hunter more than ever. Non-fans and casual gamers will do perfectly fine by only renting Conviction. The short single player campaign and the hit-or-miss online co-op will make it or break it with most gamers. Categorically, it teeters between stealth and action. That hybrid is either going to be a big hit or a big miss, depending on the gamer. It is an AMAZING game with high amounts of polish, a great storyline and fantastic controls, but it’s definitely not for everyone.

The spies Archer and Kestrel open up the story in new directions and it would be fantastic to see these two in a full Splinter Cell spin-off title of their own someday. Fingers crossed.

As for PC gamers, I can’t say whether or not Conviction is worth your hard earned dollars when it finally becomes available on that platform. Everything that is true about the 360 version is true about the PC version with the exception of one thing. One LARGE thing: Ubisoft’s new digitial rights manager. In order to enjoy Conviction on PC, you must be constantly connected to the internet while playing the game for security purposes. Whether or not you’re playing the single player or multi-player aspect of the game doesn’t matter. If your connection is spotty, or it becomes interrupted or if the Ubisoft servers go down, your game will stop. Personally, I’ve owned all the Splinter Cell titles on PC up until this one. Using a constant, continuous and uninterrupted internet connection just to ensure my copy is legitimate is a pill that’s too jagged for me to swallow.

Here’s hoping that Fisher picks up his night vision goggles (and soon) for his next mission.