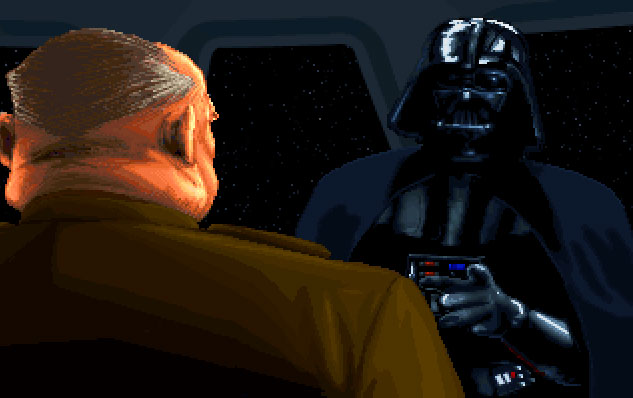 Elder geeks and Star Wars fans have probably played, or at least heard of the Jedi Knight series. The first game in the series, Dark Forces, introduces players to Kyle Katarn, a character created specifically for this game. Following in the footsteps of games like Doom and Wolfenstein 3D, Dark Forces is an early first person shooter released for DOS on the PC, and later ported to Mac, PS1 and much later to Steam and Direct2Drive. Dark Forces can be pretty unforgiving when it comes to difficulty, but if you push through it you will see an epic Star Wars tale that has now evolved into a series of five games. 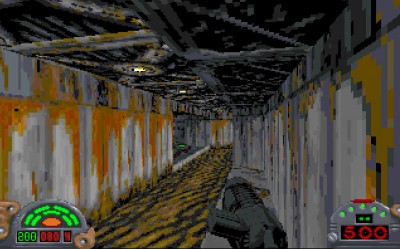 Yes the dianogas are in the sewers, and yes, they are scary.

After mercenary Kyle Katarn finds the Death Star plans for the Rebel Alliance, they go ahead and blow that sucker up. After that the rebels call on Kyle once again to investigate a new type Imperial trooper being utilized in battle. The troopers under investigation are the Dark Troopers and they are heavily armored, dangerous and arguably one of the coolest looking character designs in the Star Wars Universe. Along the way Kyle runs into many obstacles and travels to many different planets including well known locations like Nar Shaddaa and Coruscant. Most of the story is told in text, so you might have to use your imagination a little, but overall it is interesting and fits the Star Wars mythos well.

Although they may not look like much today, the graphics in Dark Forces were top notch for its time. The texturing on the walls and floors make every level look unique and the enemy models and weapons are all surprisingly detailed. The stages have a unique feel and are often labyrinthine in design. Some of them took me over an hour to complete.  There are also a few cut scenes in the game that use some pretty impressive 3D animation for its time. Even though the graphics have not aged well, they certainly don’t hurt the experience. Just don’t try to play it full screen on a giant monitor. Your eyes will bleed. 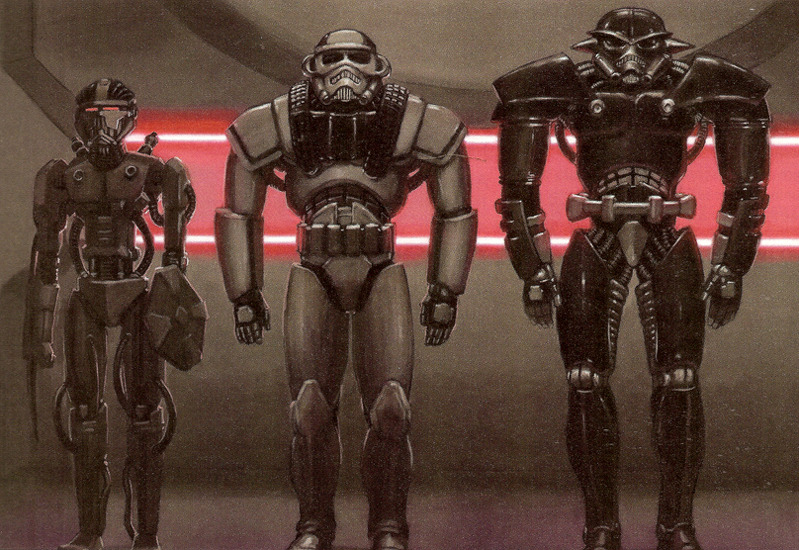 These are Dark Troopers. Cool, right?

If you have seen the Star Wars films then you will undoubtedly recognize the familiar music and sound effects. Each stage is accompanied by a piece of background music and it always fits the scene. It might get a little repetitive after a while, considering some of the levels can be pretty long, but it is by no means unbearable. There is also some voice acting done in the game. You’ll mostly here storm troopers yelling things like “set blasters to full,” or “you’re not authorized to be in this area,” but Kyle, Vader and others all have their own lines throughout the game. The voice acting works surprisingly well overall and makes the game feel more complete. As far as the music goes, it would feel like less of a Star Wars game if the famous score was absent.

While some consider Dark Forces to be a Doom clone, there are some significant differences. While it is true that Dark Forces is a first person shooter, there are also many puzzle solving segments as well as some precision platforming. When these game play aspects are combined with the unique, multi-leveled stages in the game, it creates a whole new experience completely different from other games. 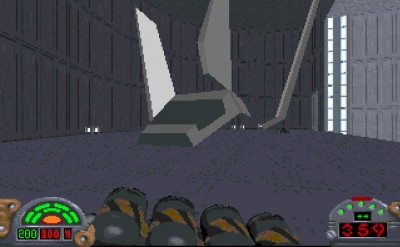 What Dark Forces is most known for is the gunplay. There are ten different weapons including bombs and your fists and each one is unique and does something different. For instance, the storm trooper blaster will probably be your best friend for most of the game, but when more powerful enemies like Dark Troopers come along you will switch to one of your heavier weapons. The shooting itself is fun and can get pretty challenging when you get to the more powerful enemies. Punching storm troopers in the face never gets old either.

Besides the gunplay, the other main part of the game is puzzle solving. Unlike Doom and Wolfenstein 3D, completing stages in Dark Forces revolves around hitting switches and completing puzzles. Sometimes it just involves hitting a switch to open the door, and other times they are more complicated. Examples are timed doors, finding keycards and hitting switches in a proper order. Some of these are relatively easy, but others will rack your brain and have you traveling all over the stage trying to figure it out. This might turn some of the casual crowd off, but fans of the series and more hardcore crowd will probably be pleased by this challenge.

The last part of Dark Forces is the platforming. This mechanic rears its ugly head from time to time and when you miss a jump it usually means either falling to a previous part in the level or death. Since the whole game is shown from the first person perspective, the platforming becomes an even larger problem when looking up and down does not change the perspective that much. You are able to look down, but it can still be pretty difficult to tell exactly when to jump, especially when you are running. The platforming sections are not nearly as abundant as the shooting and puzzle sections, but they will probably take you a few tries to overcome. 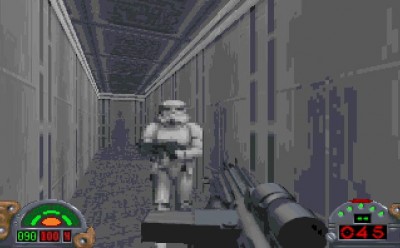 Most of the control layout in Dark Forces is great. There is no tutorial in the game, but if you have played an FPS on the PC before, the controls will feel very similar. You move the mouse to aim, press the WASD keys to move forward, backward and strafe, click to shoot, etc. The only problem is the default keys for looking up and down are the page up and page down keys which means taking your hand off of either the mouse or the WASD keys if you want to shoot an enemy that is higher or lower than you.  If you are playing on Steam, you can find the complete control layout as well as a small tutorial on how to alter the controls on their website.

While it might not appeal to the more casual audience, Dark Forces is a classic game that offers up a good challenge for those willing to accept. Although it has aged, it still draws you in with the story and the engaging game play. The platforming might be a little frustrating, but that is definitely not a deal breaker. While it may not be as cutting edge as it was in 1995, it is still a good experience and is definitely worth the $5 price tag.