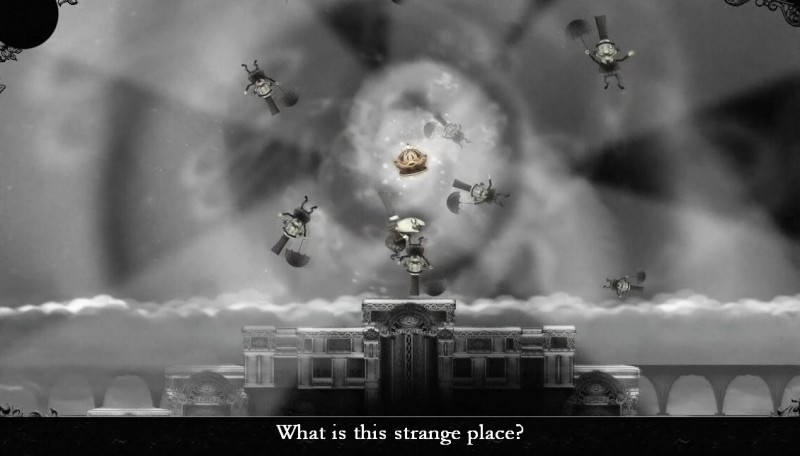 I’m talking about the game, not the character. The character P.B. Winterbottom is a dastardly, no good pie thief that will let nothing stop him in his pursuit of more and more succulent pie. He’d destroy the fabric of time itself just to get his hands on the delicious dessert.

The Misadventures of P.B. Winterbottom is the latest downloadable title from 2K China. It’s available on PC through Steam for a mere $5 and it’s worth every penny.

Players control Winterbottom with standard platformer; controls moving left, right, jumping and controlling a basic melee attack. But the platforming itself is not what will attract most gamers. It’s the devious time puzzles that will appeal to players.

In order to gather up every pie, Winterbottom needs to bend the rules of time and clone himself. By holding down the shift button, players can record a clone and the actions of P.B. When the shift key is released, the clone will continuously repeat his action through time. Clones can be stacked, launched, smacked and can smack you back (if you want them to). With all his clones in place, P.B. can then gather up all the pies within the puzzle. With only a limited number of clones available, some of the puzzles can get pretty devious. So bring your thinking caps.

The black and white with muted color presentation works very well for The Misadventures of P.B. Winterbottom. The animations themselves are minimal, to say the least. But they don’t intrude on the gameplay in any way. Certainly it would have been nicer to see some better and perhaps more complex animations for P.B., but because of the fantastically stylized environmental and wonderful stage design, this minor flaw can be easily overlooked.

Finally, the soundtrack to P.B. Winterbottom is second to none. It is fantastic and it fits the personality of The Misadventures of P.B. Winterbottom to a T. These tracks will easily get stuck in your head for days to come as they’re some of the best songs you’ll hear in a video game this year. I found myself drumming my fingers and tapping my feet to the beat the whole time while I was playing.

Beautiful visuals, intuitive and simple controls, tons of a challenge and a sweet sound track for a mere $5. What more do you want in a puzzle game? It’s easy to pick up and it’s easy to put back down, so P.B. Winterbottom will be alive for years to come. The Misadventures of P.B. Winterbottom will most likely land on more than a few Downloadable Game of the Year Award nomination lists. Get this one while it’s hot.

5 thoughts on “The Misadventures of P.B. Winterbottom Video Review”