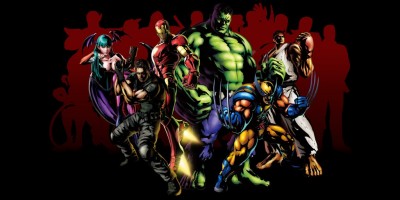 Like the Avengers or the Justice League, a slot on a Capcom cross-over fighter roster is a treasured and highly sought-after position in the fields of super heroes and world warriors. And, according to the latest Game Informer issue; Deadpool, Dante (young Devil May Cry 3: Dante’s Awakening skin), Felicia (Darkstalkers), and Captain America can count themselves among the combatants for the upcoming Marvel vs. Capcom 3. The magazine “Impressions” spread also includes a lot of gameplay updates on the title, as well as some sweet new screens, all of which can be found after the jump.

• MvC3 is using the Tatsunoko vs. Capcom scheme to be more accessible, but will retain stuff like Hyper Combo cancels, Snapbacks and assists.

• The game will have the alpha, beta and gamma assist types, just like in Marvel vs. Capcom 2.

• MvC3 aims to knock down the wall of complicated controls and open up the field of strategic fighting to all comers. This means fusing the accessible controls of TvC with tried and true MVC2 gameplay.

• The game has simplified launch attacks which are universally performed with one button, the Exchange button. This can also be pressed along with certain directions to slam opponents into the ground, leaving them susceptible to combos. Players can also hit the Exchange button in midair to tag in other team members on the fly. You can also counter exchange moves by guessing the correct exchange move to input at the same time as your opponent.

• Deadpool’s teleportation device will comically malfunction if you spam his teleport move. Also, he breaks the fourth wall by beating his opponents with his health bar.

• Chris Redfield uses his weapons from Resident Evil 5, his shotgun and the “shock stick.”

• Moves from the previous games seemed to have been retained. Wolverine and Hulks’ Supers are shown.

What characters do you want most in Marvel vs. Capcom 3? Pitch your inclusions below!

7 thoughts on “Dante, Deadpool Confirmed in Marvel vs. Capcom 3”