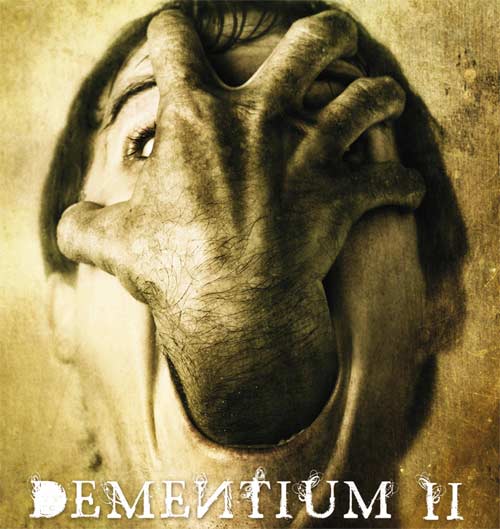 Normally when I think of first person shooters or survival horror games I don’t think of the Nintendo DS as a suitable platform. Dementium II defies my logic and executes both of these genres on the DS. Set in a mental institute for the criminally insane, Dementium II offers up some chilling game play moments in some creepy environments around the prison. In the end there are two questions that need to be answered. First, is it good? And second, is the adult diaper necessary? 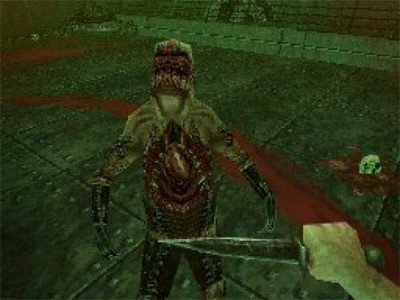 In Dementium II you play as William Redmoor. He is an inmate at Bright Dawn Treatment Center for the criminally insane who recently received a brain operation. After waking up from the operation you’ll find nobody around and will be left with the only option of getting out. Along the way you will find notes that expand the barely existing story of your dead wife and daughter and encounter a seemingly insane doctor. Throughout the game you will randomly transport to what looks like an alternate dimension where most of your battles will take place. That aspect reminded me a lot of the Silent Hill series. There are also some video clips scattered throughout the game to help guide you thought the story. The clips look nice, but most of them are not really necessary.

In addition to the less than stellar single player story there is also a survival mode that unlocks progressively throughout the game. During that mode you go through rooms and each room has a new weapon and a few enemies to kill. Much like the name implies, you will go through the same set of rooms until you die. This mode is fun to do once, but there is not enough variety to make me want to come back to it often.

In general, 3D graphics have been known look sub-par on the DS. Dementium II takes that theory and calmly tosses it aside. First and foremost, the monsters look great and they are all very creepy. All of the monsters from the small worms to the gigantic bosses look like they belong in this demonic world. The environments are also very impressive. Instead of just walking through dark corridors the whole time the game opens up into large churches, underground tombs and even the outdoors around the treatment center, and they are all very detailed and worth exploring. What is really impressive about this is the frame rate never dipped once during my play through. In terms of 3D graphics, you really cannot do much better than this for the DS. 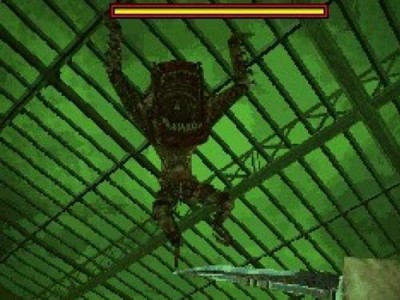 One of the boss monsters

Just a side note: if you are playing this on the original DS, don’t try to play it anywhere where you are exposed to sunlight because you will not be able to see anything. Since you are probably going to play this in the dark, with headphones and on a DS Lite or DSi if you play it at all, this is not a deal breaker by any means, just worth mentioning.

One of the many eerie things in Dementium II is the music. It’s always in the background during game play and it really sets the creepy mood of the game. There is also a separate track for when you have been spotted by an enemy and when you don’t know where the enemy is it can build a lot of suspense. That being said, the sound effects took some of the tension out of the game. Most of the time when I would enter a dark room I would hear the monsters yell out, so I would know exactly what I was up against as soon as I was inside. So in the end the tension would rise with the music, but then fall again when the monsters essentially yelled “HEY I’M HERE!”

Dementium II plays like a standard first person shooter. You get a variety of melee weapons as well as guns to use throughout the game and you can do all of the basics like jump, crouch, sprint, etc. I was skeptical right off the bat because I usually tend to avoid first person shooters on the DS because of the controls. The control scheme in Dementium II is not optimal, but it is the best the DS can do with a touch screen substituting for a second analog stick. You move and strafe with the control pad, fire with the left trigger, look around by using the touch screen and jump, crouch and open doors by pressing buttons on the touch screen. It worked well for the most part and the only thing I did not like about it is double tapping the touchscreen to jump. I would constantly find myself jumping while trying to turn because I’d take the stylus off of the DS for a second. 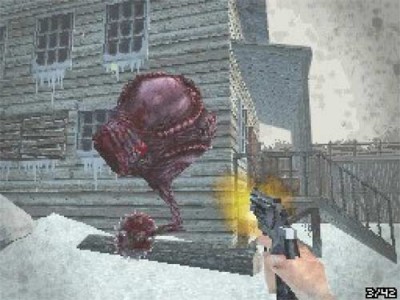 I have no idea what that is, but it has a buzz saw on its only appendage

As far as shooters go, Dementium II is more of a first person stabber. Since ammunition is a pretty rare commodity you will probably find yourself using it up very quickly and having to resort to the knife you have for most of the game. In addition to shooting there is also a fair amount of exploring to do. One of the best features is the map that is constantly on the bottom screen telling you where you have been. If you don’t explore everything you risk missing a weapon that could help you out later on in the game.

Along with the shooting and stabbing there is also the surviving. A survival horror game on the DS is a difficult thing to pull off since playing anything on a handheld tends to be less immersive than playing on a console. While Dementium II never scared me outright, the entire game is very creepy and foreboding. The boss battles are all varied and exciting and due to the lack of ammo it definitely feels like a survival horror experience. This is probably one of the best survival horror experiences on the DS and if it was on a console it would probably be much scarier. 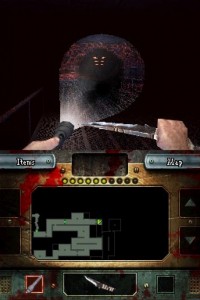 No don't touch it! It's so annoying!

The only damper on the game play was a certain type of enemy. Instead of hurting you like every other enemy in the game, if you touch this one it transports you to a small room where you fight three or four other enemies and when you kill them you are transported back to the beginning of that room. They are very similar to the wallmasters in the Legend of Zelda series. To me this brought the game to a screeching halt and it completely pulled me out of the experience. Thankfully there are only a couple of these encounters.

Although the game is very good from a technical standpoint, the single player game is very brief. The game spans five chapters and each chapter takes 45 minutes to an hour to complete, maybe a little longer if you extensively explore every inch of the map.  Since the survival mode does not add to the experience at all, once you finish playing through the game once there is no incentive at all to go back for a second play through unless you missed something the first time.

Dementium II is a solid survival horror experience on the Nintendo DS. Although the story is weak, the game looks great and the controls mostly work in its favor. The monsters and environments are unique and varied and it feels like more of a survival horror than a shooter due to the lack of ammunition. While it does not scare you enough to lose control of your bodily functions, there is definitely a feeling of foreboding throughout the game. Unfortunately it will only take around 5-6 hours to complete and while it is worth playing through, you can probably finish it in a weekend rental.