The Halo-franchise is one of the most successful platform-exclusive franchises in existence, and the popularity of the series was recently emphasised when it was voted by readers of Guinness World Records to be the favorite franchise of gamers overall. Deserved or not, throughout the years Halo has become synonymous with ‘console shooter’ and ‘arcade fragfest’. However, competition has grown strong throughout the years, and Halo is no longer the most popular FPS available on the Xbox 360 (having been overtaken by Call of Duty in terms of active players).

Nine years after the release of Halo: Combat Evolved, developer Bungie is almost ready to launch Halo: Reach, the final game that this studio is set to develop in the series. Rather than continuing the storyline of the iconic Master Chief, who “finished the fight” in 2007’s Halo 3, Bungie takes players back to events that took place prior to the events of Halo: Combat Evolved. And while a final release date for the game has not yet been announced, Bungie has released a public multiplayer beta for Halo: Reach on May 3rd, showcasing many of the new features and gameplay changes that clearly set the game apart from its predecessors.

Perhaps the most impactful way in which the multiplayer aspect of Halo:Reach differs from its predecessor, is the fact that players take control of a new generation of Spartans that can be customized in a gameplay-altering way. Though the appearance of characters could already be customized in Halo 3, Halo: Reach will allow players to customize their characters with various unique skills. Prior to entering the game, players are given the option of spawning with a specific ability / weapon combination. This starting weapon can be exchanged for one of the many other firearms strewn throughout the maps, but players are stuck with the ability they chose until they are presented with the respawn menu, where a different loadout can be chosen. 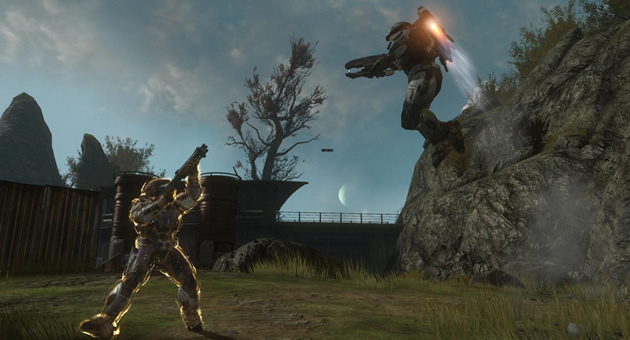 Amongst the new abilities that can be chosen prior to spawning is a new Jet Pack ability, which allows players to navigate tthe map faster and become a more difficult target to hit with weapons like rocket launchers, grenades or melee weapons. However, players are vulnerable to attack with standard firearms, as they are unable to take cover or quickly change trajectory while in mid-air.

Overall, the game includes five different activated abilities, which replace the “bubbleshields”, “regenerators” and other equipment from Halo 3. Each of these abilities can impact playing style dramatically and players will likely find a favorite ability that matches their playing style best. The most straightforward ability that was implemented is the ability to sprint. Though not groundbreaking in any way, and possibly the least impressive ability that players are presented with, the added mobility gives players the ability to quickly get in melee range of other players in order to utilize the highly effective melee or short-range weapons such as shotguns or plasma swords. The second ability related to mobility is the option to equip the controlled character with a jet pack. The inability to move around as flexibly in-flight as on the ground ensures that this ability primarily remains one of mobility-enhancement rather than a major boost to combat effectiveness. Players who take off while in combat will generally find themselves without any form of cover and are easily picked off with concentrated fire.

The combat-focused abilities include the ability to cloak oneself while simultaneously jamming motion-sensors of nearby players. Cloaked players are difficult to spot, as they are almost entirely transparent and distort other images minimally when standing still. When moving around, players ‘shimmer’ and are somewhat easier to spot, but are still difficult to spot while entangled in a firefight with other players. Luckily, the jamming effect provides players with an indication of the rough position of a player, so that players can never entirely ‘vanish’. While this ability is activated sound becomes muted, which provides one of the most intense stealth experiences found in first-person shooters and a strong contrast with the otherwise hectic combat noises.

The Armor Lock ability prevents players from being damaged for several seconds while rendering them immobile and unable to attack for as long as the ability is utilized. In team games, Armor Lock is a crucial ability as it allows players to 'cheat death' while team members take down the attacker.

The final ability available to players is the ability to render oneself immune to all damage for several seconds, while completely immobilizing the player and rendering the player somewhat vulnerable while activating and deactivating the ability. Rounds, grenades and even missiles fired at players that are actively using this “Armor lock” ability will simply be deflected off their shields and land elsewhere.

A separate ability, available only to players taking on the role of Covenant Elites is the dodge roll that allows players to leap away from danger. As characters, the Elites are already more mobile, as their movement speed is superior to that of Spartans, and this ability further improves their capabilities of avoiding damage or closing distance for melee attacks. However, Elites are not able to pick abilities such as Armor Lock and Sprint, and have less health than Spartans.

Halo: Reach introduces several new team-based objective games, such as Invasion of Generator Defense. In Invasion, a team consisting of 6 Covenant Elites faces off against 6 Spartans in a multi-stage map. Elites must capture two control points on the map, and then retrieve an object from the enemy base and return it their extraction point. As Elites enjoy increased mobility, and suffer from reduced health, gameplay differs greatly depending on which team the player belongs to.

In terms of equipment, Bungie has clearly taken a step back from previous installments in the series. Perhaps most surprisingly, the ability to dual wield single-handed weapons, which was introduced in the series by Halo 2 (2004), is absent. As a result, the pace of combat is slightly lower than it was in Halo 3, making it more manageable and reducing the ability for players to employ a ‘spray ‘n pray’ tactic. There are a few major additions to the arsenal, but many other weapons have been redesigned or replaced by a nearly identical weapon. The Battle Rifle and Covenant Carbine have been replaced with the Designated Marksman Rifle (DMR) and the Needle Rifle respectively, and the Plasma Rifle has been replaced with a somewhat larger Plasma Repeater. Human pistol, which has seen several incarnations throughout the series, has been reverted to the form in which it was first seen in Halo: Combat Evolved. New additions includes a set of grenade launchers, of which the Covenant incarnation is especially creative as it allows players to launch up to four homing sticky grenades at other players if they charge the weapon long enough. Finally, the Covenant sniper has been overhauled and now fires a continuous beam of energy at players.

Unlike the armor abilities that appear to have been polished extensively, the arsenal still has several rough edges. The Covenant beam rifle is not only incredibly effective as a sniper rifle, but since it is capable of firing a continuous beam for extended periods of time before overheating, it is also incredibly effective at short and medium range as accuracy does not suffer while on the move and there is little penalty for ‘missing’ a shot. Furthermore, players that pick up short-range weapons such as the shotgun or Brute Hammer often dominate maps until they run out of ammunition or another player manages to tag them with a grenade. Obviously, it is only fair that these weapons are incredibly effective at such short range, but when their strength is more than doubled when combined with the activated abilities, as all except the armor lock ability make it easier to get up close and personal with opponents.

With the addition of the new Arena playlist, players can participate in a long-term competition that is somewhat similar to the Arena Seasons from World of Warcraft. Participating players receive ratings at the end of each match, depending on their playing style and effectiveness (and not necessarily on their team performance), with their daily top-3 scores being counted towards the overall rankings. Higher rankings will mean that players can participate in a more prestigious league after qualifications have ended.

Finally, the addition of animated assassination moves appears to be somewhat undermined by the high pace of combat. These abilities require a player to hold down the melee button while facing the back of an opponent. Assassinations generally take a few seconds to complete, and the actor is vulnerable while performing the move. In contrast, the ability to instantly take out an opponent with direct melee attack to their back is equally effective and much safer. Players familiar with the multiplayer experience of previous Halo games will know that the action is high-paced and that players generally do not stand still at all. Performing an assassination is therefore an action that is difficult to perform and needlessly risky. The animations associated with these moves are impressive and it therefore seems a waste that they are only performed so sporadically.

Overall, Bungie does not appear to push for a similar multiplayer experience as it had with Halo 3 and earlier installments in the series. New multiplayer modes emphasize team play and it is clear that the developer has re-evaluated gameplay decisions it had taking earlier in the series. There are still rough edges to be smoothed over, especially concerning the balancing of weapons in combination with certain activated abilities, and perhaps in level design as some maps contain areas that most players just generally avoid. Matchmaking and network issues are virtually non-existent, and added functionality for teaming up with friends and character customization add some additional flavor to the overall experience. It is clear that this game is a work-in-progress, but if the beta is any indication, the foundations of this game are strong and with a little more polish and continued support from Bungie, Halo: Reach will be a game remaining in the charts for a long, long time.