One of the most competitive games in the world isn’t a game, it’s a map. You might have heard of it before—it’s called DotA, which is short for “Defense of the Ancients.” It was based on the map called Aeon of Strife for StarCraft before eventually making its way to Warcraft III. For the last five years especially, DotA has been growing in popularity rather dramatically with millions of players worldwide.

So what on Earth does DotA have to do with HoN (Heroes of Newerth) from S2 Games? HoN is quite literally the spiritual successor to DotA all the way from the main map to the heroes and items—and almost everything in-between. Granted that the people making HoN have no affiliation with DotA but if you’ve played DotA before, then you’ve played HoN to a great extent.

HoN comes into a market that has been largely untapped by game companies with only Demigod, League of Legends and the yet to be released Bloodline Champions as direct competition outside of the longstanding DotA. The question though is does HoN have what it takes to receive your hard earned dollars at the current $30 asking price? Well, that’s what we at Elder-Geek are here to help you with! 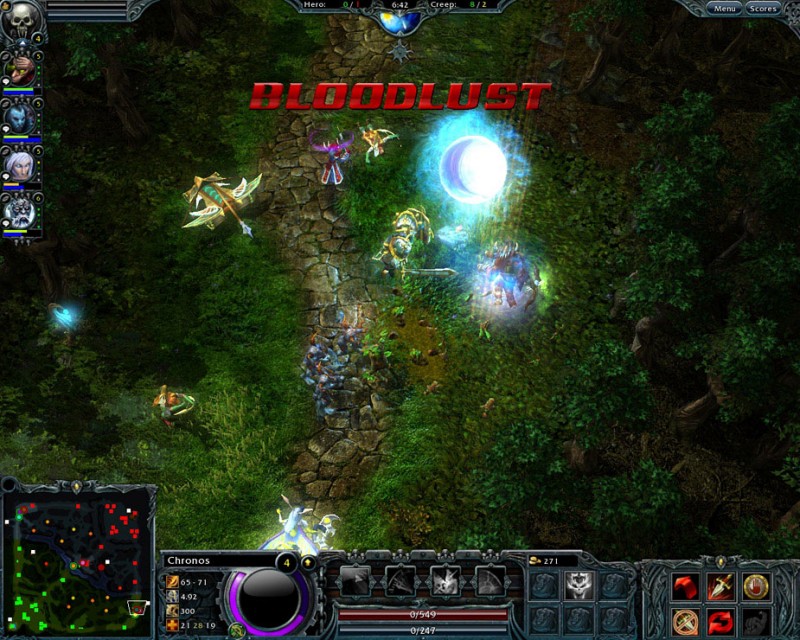 Now, if you have no idea what DotA is, it’s essentially a click to move and key bind based hero arena game. MOBA (Multiplayer Online Battle Arena) seems to be the growing term for such a game. This concept carries over directly to HoN. The basic gist is you select from one of the sixty-four heroes currently available in the game (many of which are DotA ports/copies) for a match that is almost always 5v5 combat. Everyone starts out at level 1 and through killing NPC’s you gain experience. You also gain extensive experience through killing heroes on the opposing team.

As you gain experience you level up, with level 25 being the max level. Each hero has four unique abilities to which you can add one point to every time you level up. However, each of the abilities can only be upgraded four times each. That means that after you upgrade those abilities fully, you put the rest of your points into something called stats which increases your intelligence, agility, and strength.

I think you can already tell that HoN is a pretty deep game, but the depth doesn’t end yet. Not even close. Through killing NPC’s and heroes alike you gain gold that, in turn, you use to buy items. Every hero has a total of six inventory slots into which you can put an item. There is a wide array of items that all have their uses, and what may be good for one hero could be fairly trivial for another. Some have static stat gains while others have mana or health regeneration, effects on use, and so forth. Thus, who you face and the items that everyone gets make each game quite unique. It also means you need to be well versed in what every hero and item can do. 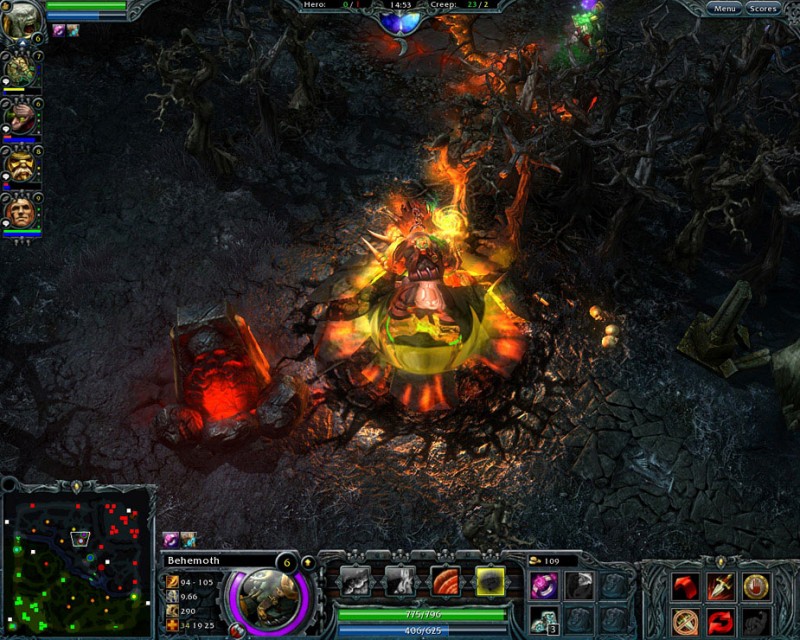 Currently, this all takes place on a map which is modeled completely after the one in DotA. However, there is another 5v5 map as well as a 3v3 map available for people to use and add some variety to their game experience. The maps are all arranged into lanes, which is where the NPC’s from both sides of the team clash. Each of these lanes has a series of towers that must be destroyed to reach your enemy’s main base. Think of this as a game of tug-o-war, only in reverse. Push-o-war perhaps? You win the game by pushing all the way into the opposition’s base and destroying their monument.

Graphically this game isn’t bad by any means. In fact, I’d put it up there on par with most of this current generation of RTS games out there right now. I’ve already played some of the StarCraft 2 beta and HoN comes close to that high level of detail. There are tons of neat particle effects, shading, quality lighting, distortion, and so forth.

Overall, the engine seems to be well made too. As someone who played DotA I’ve noticed how much more has been allowed within HoN due to a more modern engine. There are abilities that some original HoN heroes (ones ports from DotA) have that you simply couldn’t replicate in DotA.

Some nice features really help the overall game out as well. For instance, you can now reconnect to a game if you lose your internet connection. There is in-game VOIP (Voice Over IP) that you can use to communicate with whoever is in your lane or your entire team all at once. Also, lag is not shared among players due to the client-server netcode.

There is also wide usage of statistics within HoN, all the way from ladder rankings to stat tracking. HoN even has a matchmaking system that you can use if you don’t want to find games manually. This matchmaking system goes by a completely different rating system from public (self-chosen) games as well, since you effectively can’t collude and team up in it.

The sound design within HoN is really well done. Hearing a bunch of heroes use their abilities in a giant battle is enjoyable. The voice acting on the other hand is hit or miss. Some of the heroes have really annoying vocals. The music is ok, and I even talked to the guy who did it a few months back and he has some great talent that I felt was wasted. I wish that S2 Games took the music more seriously and encouraged the creation of unforgettable scores with a multitude of clearly defined melodies. Instead, we’re left with an unmemorable array of somber and ambient orchestral mixes. One of the songs had some snare drums and horns that helped to liven it up, but it wasn’t enough to save this shortfall.

Admittedly, Heroes of Newerth is an incredibly difficult game to learn, but if you put enough time into it you’re going to be rewarded with an immensely deep and exciting gameplay experience. It’s because of this time commitment that this game is simply not for everyone. You also must have thick skin because some people will likely call you out for poor play until you get better, which again takes time… and by call you out, I mean curse and degrade you. On the other hand, if you’re a DotA veteran you should be able to jump right in and learn everything pretty fast. With a one-time payment of $30 for infinite online play for the entire existence of this game, I’d say it’s a great deal. 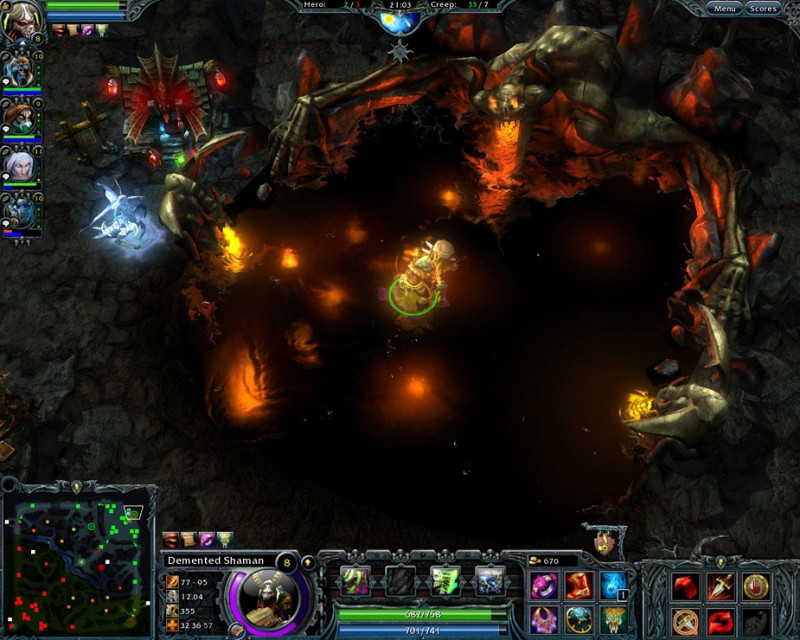 There is, however, one permeating detail that would make me suggest waiting to purchase this game. This is largely for current DotA players thinking about making a switch. The main developer behind DotA (IceFrog) was recently hired and given a team over at Valve to create a game. I’ve been told by a few sources that it’s quite literally DotA 2, and will have the full backing of Valve (obviously), and thus Steam as well. Now this is by no means official, and I can’t guarantee its validity. However, I can assure you that IceFrog is in fact working on a game with Valve at this very moment. As such, if you’re a DotA veteran I’d wait on purchasing this game until E3 in June to see if an announcement is made. The logic behind this is simple. I’d expect the main developer behind the very game HoN is based on to create a better game, especially given the fact that he has Valve behind him. That is just the opinion of this writer though.

If that doesn’t matter to you and you’re merely skeptical because you can’t try it before you buy it, S2 Games has made it clear that there will be times for people to test out the game in the future. So, if you want to wait until that happens to make sure you’re spending your money wisely I’d do just that.

Regardless, I wish there was a trial option right now because, while I think this is a fun game from my end, I wouldn’t advocate spending $30 unless you know what you’re going to get. If you have WarCraft III: The Frozen Throne, I’d suggest trying out DotA for free (it’s a custom map), and if you enjoy that you’ll likely have fun in HoN as well.

This is a game that is well done in terms of fun provided but it’s also not for everyone so I wouldn’t recommend flat out buying it. The only reason it was so easy for me to slip into is because I was quite experienced at DotA.

34 thoughts on “Heroes of Newerth Review”