Hey! Do you know what’s not the worst video game of all time? E.T. The Extra-Terrestrial.

You read correctly. E.T. The Extra-Terrestrial for the Atari 2600 is not the worst video game of all time. It’s not even close. And to be honest, I’m getting really fucking tired of reading recycled Top 10 and Top 20 lists of the “Worst Video Games of All Time” that sheepishly toss E.T. into the #1 slot. It kills me inside a little bit when I watch gamers born in the SNES era or later mimic the Angry Video Game Nerd and try to degrade E.T. because they read how “bad” it was.

E.T. doesn’t belong at the #1 slot. I’d even go as far as to say it’s not worth landing a mention on a superlative list. It’s not a bad game.

Don’t get me wrong. I’m not claiming it to be one of the best games of all time. I’m not even claiming it’s a great game either. 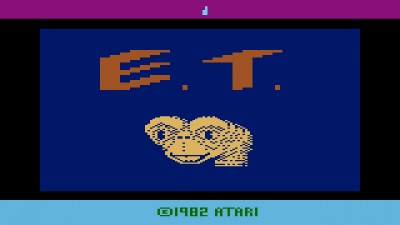 Oh, and the title screen music was badass for the 2600!

Now, before a bunch of you reply about how the game is “such a piece of shit,” and that it’s “broken” or that the game single-handedly almost ruined the video game industry, etc., etc.,… Let me ask you one question first. How old were you when E.T. was released on the 2600? Because if you weren’t old enough to play it, then I’m sorry, but you have no frame of reference and therefore, you have no room for comment.

Let me tell you why E.T. isn’t the piece of shit everyone is trying to sell it to be. Or for that matter, why it doesn’t belong on any “10 Worst…” lists.

For starters, E.T. is a playable game. And I’m certain that most of the people reading this article can probably list 10 games that are 100% unplayable because of some broken game mechanic. Gamers can start E.T., and if they know the objective of the game, they can finish E.T..

Do the graphics suck? Yes! Did they suck in 1983? No! The same can be said for all aspects of the game. The sound, the play style, even the box art and manual were all par for the course for Atari 2600 games at the time. By today’s standards, I’d say that almost all the titles from the Atari 2600 lineup have “shitty graphics” and “unplayable controls.” They were all glitchy, had terrible sound effects and had poorly-responsive controls. If I close my eyes for just a half second, I can clearly hear the sounds of the frogs jumping and getting squished in Frogger.  The abrasive audio of that game is tattooed permanently in my brain. I’m certain there are other gamers out there who can say the same, if not about Frogger, then about some other classic game like Kaboom! or Jungle Hunt. But you never hear anyone trashing those classics.

When E.T. came out, I was just a little boy. Not only did I play E.T. regularly, but I completed the game regularly and that was without the use of strategy guides, cheats, or online video walkthroughs. Don’t think I’m bragging. Don’t think I’m calling myself a video game wunderkind.  E.T. was a very standard video game for the time. It sported similarly awkward graphics and sound that all 2600 games had. 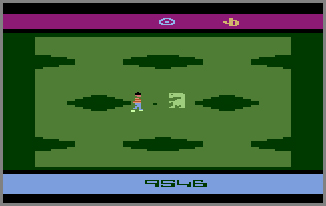 Frankly, I thought Eliot looked more like Ernie from Sesame Street. But at least he looked like a human kid.

And the color? Not many of us could complain about color. Believe it or not, most households only had one television in their home at the time. And a good number of those homes still had black and white TVs. I was fortunate growing up that we had two televisions — a color one in the living room and a black and white one in the family room where our Atari was kept — so I rarely had to wait my turn to use a television to play video games.

One common complaint about the game “I don’t even know what to DO on this screen.” Well, in the 1980s, we had these things called “Game Manuals” and for most games you played, it was requirement to read them before you started playing. Certainly there are plenty of exceptions to the rule like Pac-Man, Space Invaders, Centipede, etc. But those games are Action titles.

E.T. was an Adventure title. And for those of you who want a little trip down wood paneled memory lane, you can find some gorgeous high resolution scans of the manual on randomterrain.com.

The instructions explained everything gamers needed to know about the game. You had to find missing pieces to your phone and escape while running away from evil scientists and the FBI. And what made it rather original (and true to the movie in a sense), you had to play it non-violently. You had no weapons. You had no physical means of defense. The only thing E.T. could do was run away. In a sense, it was a lot like a survival horror game.

So if the game was so awesome, why didn’t it sell well?

Actually, the game sold amazingly well for the time. It is the #5 best selling video game for the Atari 2600. 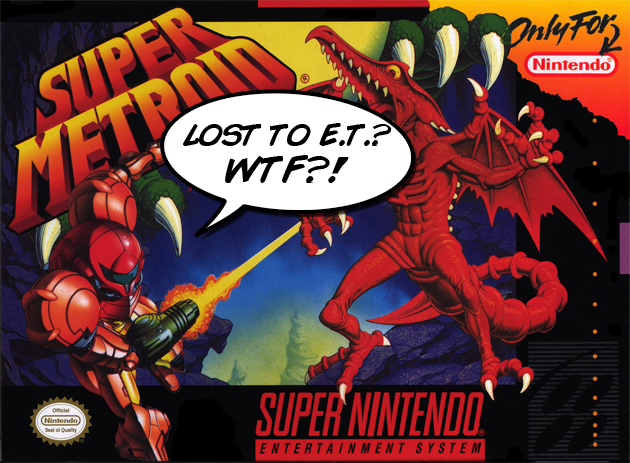 I know that sales don’t mean it was a good game. I’m just making the point that the title did amazingly well for a brand new console on a brand new medium.

The problem with E.T. wasn’t how many copies were sold. The problem with E.T. was the number of copies that were made. Both retailers and Atari grossly (and negligently) over-predicted its sales. Their assumption was based on the exuberant reception of film. After all, E.T. shirts, mugs, hats, posters were selling like hotcakes.

E.T. printed money for Spielberg and Atari was hoping for the same thing.

Ok, smartass, if E.T. didn’t crash the market, then who is to blame?

You can all turn your non-glowing index fingers away from E.T.’s face and point them right at Atari.

And why should anyone be surprised by this? This was just one of Atari’s first of many blunders in the video game industry. The game grossed $25 million, but in in the end it netted a  loss of $100 million for Atari thanks to the previous mentioned “over estimation.” And since Atari essentially was almost the entire video game industry at the time, of course the market almost crashed. What else do you expect when you have a market that is heavily controlled by one company, and that one company makes one of the dumbest business decisions of all time?

In fact, thinking back over the past 30 years, the only thing I can think of Atari doing right was creating the Atari 2600, rehiring Nolan Bushnell after decades of absence, and helping out CD Pojeckt Red with The Witcher. The Atari 5200 sucked. We all know of the Jaguar’s smashing failure. Atari’s video game reputation post 2600 years is regarded as a joke by many in the video game industry. The overproduction of E.T. and Pac-Man was just the beginning of their string of blunders. 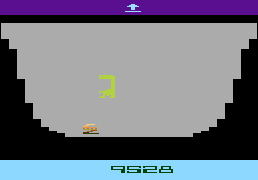 So falling in the wells was frustrating. BFD. You want a frustrating 2600 game? Try Circus Atari and we’ll talk again sometime.

E.T. didn’t stop selling because the “game sucked.” E.T. simply stopped selling because it reached everyone in its market. It sold 1.5 million units, but Atari produced an additional 2.5 million more copies. At the end of its lifecycle, the Atari 2600 had 30 million units worldwide. That means, Atari expected a whopping 13% of all its console owners to purchase the title at $50 per cartridge.

A 13% saturation for the video games market is high. That’s actually a higher saturation point than Gears of War which is the 3rd best selling video game on the Xbox 360.

E.T. was the second movie video game adaptation ever created, and it was the first console movie video game ever created. There was no barometer in place to properly predict sales. In order to meet a demand that Atari thought existed, they produced entirely too many.  What’s more likely, they just got greedy and tried to force it down consumers’ throats.

So, the next time you see someone bitching online about how terrible E.T. The Extra-Terrestrial is for the Atari 2600, have the balls to stand up and say, “you have absolutely no fucking clue what you’re talking about.”

Oh… and don’t bitch saying, “this guy is just pissed because someone is shitting on his childhood.” That’s not the case here. I’m just trying to point the blame in the correct direction. There are plenty of games that I loved when I was a kid and realized while looking back that they were a giant piece of crap like Wrath of the Black Manta, Journey: Escape,  and Jaws 3. If you want to hold someone accountable for the “near crash of the video game market,” you should look squarely at Atari and nowhere else.

The opinions expressed in this article are solely those of Randy Yasenchak and not necessarily those of Elder-Geek.com.

8 thoughts on “In Defense of E.T. The Extra-Terrestrial”