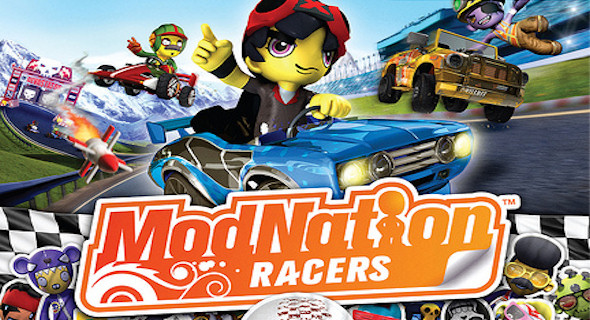 Do you remember when you were a little kid and your mom would take you to McDonald’s, (if you were a fat little kid like me) and you would get a happy meal. The food came and went, but your real concern was about the toys. If you continue to think back, generally these toys consisted of whatever was popular at the times for kids. Things I can remember included The Power Rangers, Batman, All Dogs Go to Heaven, etc.…only there was one significant difference…. the characters were always randomly placed in go-karts. For some reason the McDonald’s happy meal toy makers were convinced that a regular action figures of your favorite Ninja Turtle or Tiny Toon Adventures character was not up to snuff. So in order to add depth to each toy, they would put the character in their own custom made kart. Well, it was a good idea then, and it’s a good idea now, as ModNation Racers capitalizes on this exact idea. There are literally thousands of characters from geek culture that have already been created and ready for your download. So if you ever wondered who would win in a race between Vegeta, the Monopoly Guy, Where’s Waldo, Winnie the Pooh, and Samus…you’re reading the right review.

One of the issues with reviewing a game like ModNation Racers, is the fact that the genre has been traditionally defined by another game: Mario Kart. I think to avoid this comparison and treat this game as a stand-alone entity would be a mistake, because if you are anything like me, you will be constantly trying to translate the concepts and ideas into Mario Kart terms. For example: 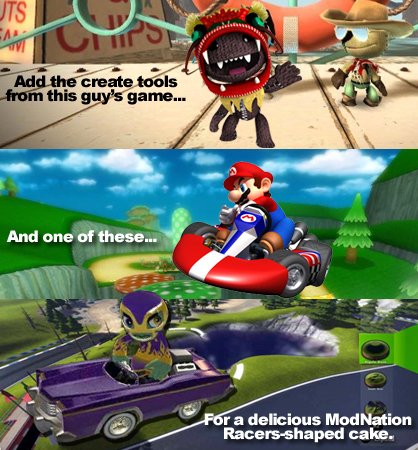 The arrow weapon that gives you a short boost…oooooo that’s like the Mushroom from Mario Kart….I get it now…etc.

So throughout the review I will keep this comparison in mind, but I will also attempt to show the merits that ModNation brings independently, as there are many that are noteworthy.

Unlike Yoshi at the beginning of a race, you will not be off to very quick start as this game requires a downloaded update followed immediately by a 20 minute install, which for the impatient ADHD gamer (me), is more like a 6 month delay. In fact, you will notice for a racing game, you spend a lot of time at the starting line waiting for games to finish loading. Which leads me to the first major weakness in this game: The Load Times.  There is a load screen for almost every transition in the game. If you’re going from the menu to a race, you may have to sit through 2-3 different load screens when in career mode. I believe there are rumors that this may be remedied soon via an update, but as it stands, the load times are a little long and far too plentiful. I can’t help thinking that if they can render a 10,000 foot Cronos from God of War 3 with invisible load times, why can’t they load up my 5 Foot Go-Kart without a making me wait nearly 45 seconds?

The copy I received also came with free DLC which included a Sackboy character and a Sackboy Kart. Whether I should feel excited to get a free character, or annoyed that I have to download something from the store that could have been on the disc is up for debate, but what I do know is that I am pumped to see a huge number of Sony characters making the cross over in a game. This game is Sony’s Super Smash Brothers, only racing. Which leads me to this games greatest strength…creation. And the user-created content is where this game truly shines. 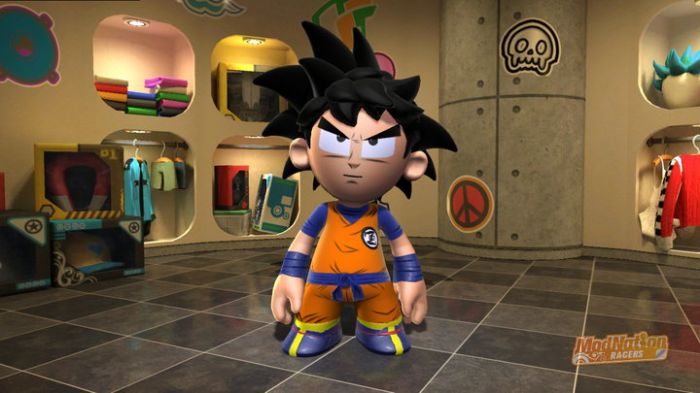 If you're a fan of.... ANYTHING you'll like ModNation.

“Play. Create. Share.” has been given new meaning with ModNation. Let me give you a short list of some of the characters that are already available to download. Vegeta, Pitboy, Samus, Mario, Luigi, Princess Peach, Link, Darth Vader, the Monopoly Guy, Nathan Drake, Shrek, Michael Jackson, Wario, Iron Man, Batman, Robin, The Joker, The Riddler, an Imperial Storm Trooper, Hulk Hogan, Goku, Kevin Butler, Crash Bandicoot, Kirby, Satan, Bender,  Venom, Sephiroth, Solid Snake, Ronald McDonald, Sonic the Hedgehog, Stewie, Jack Skellington, Obi-Wan Kenobi, Darth Maul, Jason, Knuckles, Sylvester, Space Ghost, Quagmire, Stitch, Bowser, and the list goes on and on. Point being  if you can think it; someone has probably already created it in ModNation. Some of them have such extreme levels of detail, it makes me wonder of whether or not free copies of this game were given to every concept artist in the industry.

The kart creation is also interesting, but there are just not as many cool cars as there are people unfortunately. The standard Mystery Machine, Batmobile, and Ecto 1 and 2, have all been created many times over, and are ready for you to download. Creating characters/karts can be done in under 15 minutes, or could last two hours depending on how much you are willing to invest into your mod.  If you liked the creation tools in LittleBigPlanet, you are going to LOVE what ModNation has to offer.

Creating tracks is something that is easy to do, but very difficult to master. Almost anyone can create a track, but in order to make one that will rise the ranks and become a popular part of the community you need either a gimmick (the infinite drafting track, get ________ trophy track), or an expert design that has been redesigned many times to keep it balanced.  Creating tracks is a lot like driving the karts, as they share a control scheme. You can drop in one of many, many different obstacles and ideas, including setting up traps that can be triggered by drivers on unsuspecting other players. You also control the elevation of your track and the surrounding community. One small problem is the lack of “types” of environments, which act as your templates. It would have been nice to have a wider variety to choose from. Overall the experience of creating a track is fun for all gamers, and much more accessible than creating a level was in LittleBigPlanet. 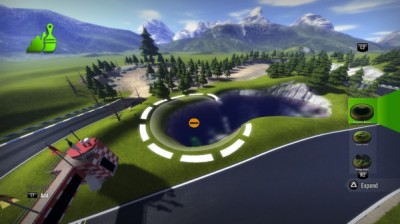 Track creation is like Othello. Moments to learn, but a lifetime to master.

Believe it or not ModNation Racers does have a story that is pact to the brim with characters and political commentary about the lack of creativity in our society and the conservative movement. The main villain runs a company called “Conservative Motors” which flaunts its plain designs and simple color schemes, because of their ability to “not make you stand out, and therefore not get kart-jacked.” Despite what your character looks like, you are called “Tag” throughout the came because before your racing career  you were a graffiti artist. You and your associates (a classic old man racing vet archetype, and your love interest own a business that competes head to head with Conservative Motors painting cars in fun and eccentric ways.  The other main villain is an Italian stereotype named “Expresso” which is the current best racer in the world. As the game progresses you will go through many twists and turns on your journey to race Expresso, and dethrone him as racing champion of the world. There is also a set of commentators who needed about 15-20 more lines in order to not seem repetitive. Although they are funny at first, hearing them make fun of each other and you with the same cheesy jokes and one-liners gets a bit old after the midpoint of the game. There are a multitude of other individual villains that a re highlighted in each race. Achievements are attached to them like knock out this guy in front of the crowd, or side swipe this character three times. It adds an element of strategy to kart racers that makes it fun and exciting to pursue these opportunities

The gameplay is very similar to Mario Kart, but seems to move at a faster pace. There are a variety of pickups that act as weapons. One difference between MK and ModNation is the ability to upgrade your weapons as you progress down the road. For example if you pick up a boost it is like the mushroom from MK. If you pick up another power up, it becomes supercharged which then makes you go faster and lasts longer. If you get a third powerup, it will become the ultimate form, and allow you to “timewarp’ forward three positions. The risk is that if you crash or get hit with an item while powering up your weapon, you lose everything. In addition drifting and doing tricks fills up your boost meter, which is very similar to the boost in Motorstorm. You can also use this meter as a defense, by draining it to form a shield around your kart for a limited time. This is as awesome as it is frustrating. Although this will allow you to occasionally win a race at the last second, more often than not, it will screw you over in the last 30 seconds of a race. Numerous times I have been in first place for the majority of the race, but been lost in the final stretch due to CPU ultimate powerups. 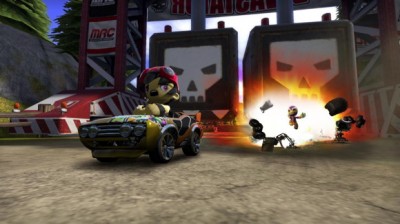 Online racing can be pretty great!

The HD quality also really enhances each player’s individual kart, and helps you distinguish between the 8 other racers on the track. As always the bright colors are a wonderful refreshers, and the SpongeBob style humor also is a nice break from the world ending apocalypse narratives that we are used to. The gameplay is superior to the latest installment of Mario Kart in my opinion, but Mario Kart purists may find it a bit to wild and chaotic at times.

Other than the load times, the online is fantastic all around. Downloading /uploading characters, karts, and tracks never took me more than a few seconds. Playing online is what you expect with a variety of modes and games going on most of the time. In addition while in the regular hub screen, other players will be driving around and talking while they go about their business. Think Playstation Home, only with go-karts.  The strength and depth to this game is in the limitless downloadable characters and tracks that will enhance the game for years to come.

People are really good online…and I mean really good. With many people being drifting masters, and the use of cheap power-ups, online play can get a bit frustrating. I would recommend beating the game first before entering the online realm, as that is level of skill you will need to survive on the information superhighway. I have always found that these games require real life people sitting next to you to truly enjoy, and this game is certainly accessible to enough that non-gamers who have played Mario Kart will quickly be able to pickup and play. So don’t be afraid to have a ModNation Party over at your house.

Overall, other than the load times, and occasional cheap finish due to a power up, the game is a definite must buy. The sheer quantity of fun and creative characters for download from Pop/Geek culture is worth the 60 bucks alone. This game really…passed….(haha) my expectations. The fact that if your friends can’t find a character they like in your collection, they can go online and look through thousands and have what they want within seconds, is truly remarkable. Like LBP, this game is only getting better with time, so understand that what your buying now is also a future investment.

Final Verdict: If you liked creativity, bright colors, LittleBigPlanet, and kart racing, (and can tolerate some slow load times) this is the perfect game for you and your friends.  Worth Buying.