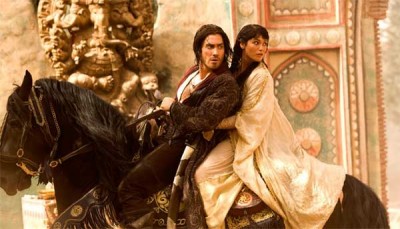 Attention has been fixed on Jerry Bruckheimer’s adaptation of Jordan Mechner’s parkour-action video game series Prince of Persia; not for any amount of anticipation, but curiosity on whether or not it could surmount the low quality curse of the video-game-movie. Its success at becoming the best of a criminally bad movie sub-genre will have gamers cheering, but everyone else will be left with a more standard popcorn blockbuster experience.

Dastan was a streetwise orphan straight out of Aladdin’s prologue before he was adopted seemingly at random by the King of the Persian Empire. After growing into the snarky, headstrong beefcake that audiences will recall from every other action movie, Dastan is accused of a crime he didn’t commit, and forced to feel the safety of the whitest Royal family in Persian history in order to protect a sacred relic and find a way to clear his name. The story hits just as a many comfortable plot holes as any of the Mummy movies, and its opening and gradual build trap it in a claustrophobic happy ending, but the overall narrative is easy to swallow and serves its purpose as long as you don’t weigh too much into it. Jake Gyllenhaal’s Dastan is poorly accented but fight-scene ready, matching about 2/3rd of the script’s smarmy wit but managing a rugged charm along the way. 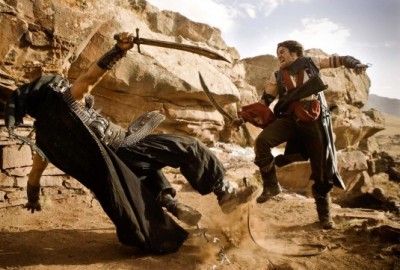 The action gets pretty intense...when you can see what's going on

The pace of Sands of Time picks up, as many other films do, with the appearance of Alfred Molina. As illegal gambling entrepreneur Sheik Amar, Molina speaks a little too colloquially for the time period, but brings an entertaining zeal that the film noticeably lacked before. Ben Kingsley smolders appropriately as Nizam, the Royal’s treacherous uncle whose villainy is revealed an hour too early by his eye-shadow. The film’s supporting cast works well within personality archetype, especially Steve Toussaint as the bad-ass knife-thrower Seso.

Where the film drags revolves mainly around the relationship between Dastan and Priestess Tamina (the gorgeous Gemma Arterton,) Guardian of the region’s sacred relic and travel buddy to the exiled Prince. The two match snappy comebacks and intellect well enough, refreshingly so on Tamina’s side (all action movie clichés considered), but muster only a lukewarm sexual chemistry, their love scenes running long and dull in between hyper-active action sequences.

Look buggy-eyed if you're the best part of this movie!

Like the video game of its origin, the action of Sands of Time somewhat evenly between direct combat, parkour chases, and a bit of on-the-fly problem solving. Many of the film’s bigger action scenes switch between the three with decided ease, managing to capture the feel of escalating challenge found in many of the video games. The camera whips about frantic roof-runners and takes pause to embellish leaps of faith with equal muster. Its when the film confines itself to direct combat, especially within closed environments, that the schizophrenic camera movement that served to make the larger battles so intense makes things difficult to see, occasionally flitting between an enemy and his thrown projectile towards Dastan too quickly for a proper understanding of space to be established. The fault is only temporary, and inconsistent enough to be only a small hindrance.

Even when it’s difficult to tell what’s going on, The Prince of Persia rarely misses an opportunity for a visually engrossing moment. Costumes and sets paint the times and style of the Persian Empire with decided ardor, with limited (but still irritating) Orientalism. The elite Hassansin killers look particularly badass through some impressive use of makeup, wardrobe, and choreography. Aside from a sticky habit of sweeping landscape shots, the cinematography dances between frantic action and smoother romantic moments expertly, giving a sense of visual variety many films in the genre sorely lack. The visual effects fare much more unevenly. Giant digital cities and rushing sand look apt enough to suspend disbelief, but CG models of actors during “Dagger Time” (when the sacred relic is activated) look goofy up close, and some of the snakes suffer from an unnatural sheen. 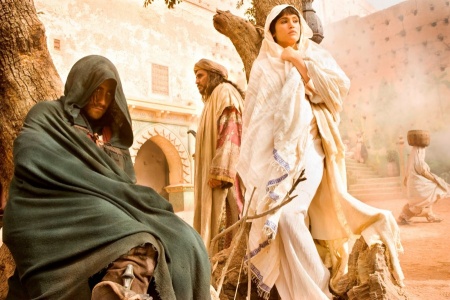 Calling Prince of Persia: The Sands of Time the best video game movie ever made is hardly a worthy compliment (its only real competition is Lara Croft: Tomb Raider after all). Its story may be thin and its visual effects occasionally spotty, but some excellent performances and wonderful fight/parkour choreography lay beneath the sand, and the package rounds to an enjoyable bit of dumb entertainment, a cut above the Mummy sequels but noticeably beneath Pirates of the Caribbean: The Curse of the Black Pearl. For a sub-genre that once had British and Hispanic actors playing the Italian Mario plumber brothers, this is a godsend. But against the best of its breed, it only puts forth an admirable fight.