As video games reach a wider audience, we are beginning to see the stories adapted to a variety of forms of multimedia, such as movies, internet videos, documentaries, anime, and as of late, graphic novels. 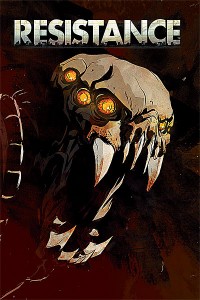 Insomnicac’s Resistance franchise has very few rivals when it comes to the sheer variety of forms of multimedia it uses to expand it’s universe. We have seen two full length Playstation 3 games, a full length PSP game, 3 different websites, including the highly classified Project Abraham Website (which was one of the extremely rare cases when live action actors portraying video games characters actually worked.) In addition, Insomniac has released dozens of “classified documents” and artificially pieces of propaganda that continue to expand the story, These reward only the most dedicated followers; those who are willing to read an entire newspaper for the slightest explanation of a tiny event within the game.

The latest installment is Resistance the graphic novel by Mike Costa (G.I. Joe: Cobra franchise), Dan Abnet, and Andy Lanning (Warhammer Franchise). The artwork is done by CP Smith, JD Mettler, and Kody Chamberlain (D.C. Comics). It  was written by Wes Abbott. The book contains eight different chapters of both consecutive and independent stories. The use of a variety of writers and artists keeps the story fresh throughout, and carries the story into several different directions. 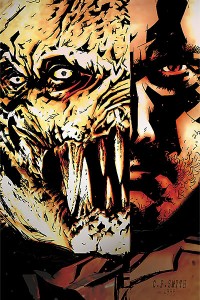 notes before I get into the main points of the review. Nathan Hale is mentioned in the novel, but does not make an appearance in this first collection. For those of you that are disappointed by this, I would encourage you not let this deter you. The characters that are used have much more personality, and are given deep and rich histories that I feel a novel focused solely on Hale may have lacked. According to some of the extra content on R2, a full length novel that focuses on a younger Nathan Hale is still in the works, so those looking for their Nate Hail fix, may simply have to be patient.

Secondly, although I will try to avoid spoilers for the graphic novel itself, there will be some PS3 and PSP resistance spoilers in this review, simply because it would be impossible to discuss the story elements without some context to work within.

It’s hard to give an explanation of the story, because it covers a wide variety of characters and events, but the main stories follow a young Private Shepard (Daedalus) and his early experiences with Project Abrahahm, a young Corporal Joseph Capelli and his first mission to Alaska to retrieve America’s Atomic Bomb, and on the Grayson brothers (Resistance Retribution) attempting to survive in a failing European Union.

The first tale of a young, and very psychotic Shepard provides a great deal of information about the main villain for those of us that were scratching our heads at the beginning of R2. It gives you a glimpse into the secret American military base in Anchorage and the bizarre experiments that the military are conducting. Project Abraham is the secret American anti-Chimera experiment that produced the main protagonist Nathan Hale, as well as SRPA brothers. Being a pretty avid Resistance follower myself, there wasn’t much in the first story that could be called breathtaking, but it does provide imagery to go along with imagination of what the early subjects of project Abraham went through. For those that have not followed the story as close as I have, perhaps this will provide a bit more insight into the back story, but for me it felt a bit more like filler than revelation. 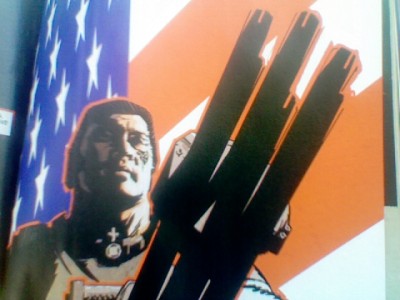 Each of the stories have their own merits, but the Capelli story is by far the most action packed and engaging. There is just something about seeing J. Robert Oppenheimer defending himself against hundreds of Chimera that really defines how alternative history should be done. The Capelli story is the meat and potatoes of this graphic novel, so if you are planning on buying this understand that you will be spending two thirds of the novel with his easily irritated and highly aggressive personality. Not to say this is a bad thing, it is done really well, you even begin to feel for him which adds depth to his character, that isn’t present in R2.

The final narrative fills in back story of the Grayson brothers. I felt it was a bit finicky in its presentation, jumping between slow emotional dialogues, and then action filled battles. If you have not played Resistance: Retribution, then it will be very difficult to understand this component, unlike the others which have the fictional independence to stand-alone. This story is really a coming of age tail for one brother, and a tragedy for the other, which sets up some of the angst of the protagonist of Retribution nicely. 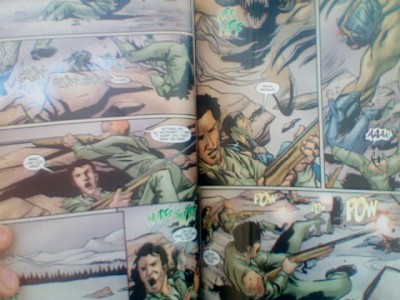 The artwork is one of the highlights of the novel. Every page brings something new and unique, unlike other graphic novels where the pages begin to blend together. Specific epic moments are really highlighted with the uses of very distinct colors for paradigm shifting events. Like the game unfortunately, the novel consists of various blends of dark earth tones. One component that the novel and games seem to do very well is capture the timeframe in US history well. The novel has a great propaganda-esque art style that makes you feel like you in the age of war bond advertisements. Every time you see a color that is out of the ordinary, it parallels well with the riff in the alternative history. The bright blue flashes that come from the Chimera weaponry that contrast the brown, greys, and blacks, that most typically associate with World War 2. This creates a great contrast that contributes to the story and gives the chimera an abstract alien feel of non-belonging.

When you read this, you aren’t reading the likes of Frank Miller or Alan Moore, so do not expect incredible social commentary or the attention to detail implemented by those literary masters. Resistance is a novel about a video game, and doesn’t try to be anything else. It’s fully immersed in its universe and if you haven’t played at least two of the Resistance games, then you will be lost (particularly Resistance 2). This is a fine book, and for a mere 20 bucks it is a cool coffee table book for any gamer’s room. It may sound trite, but if you are a gamer who likes the story of the Resistance franchise, pick this up. If you are an avid graphic novel reader, this probably won’t rock your world.