With the Tony Hawk franchise in shambles, EA is poised to take the extreme sports scene with the third title in its Skate series.  Does the game nail or bail?

Skate 3 casts you as the same legendary mute skater from the first and second installments.  Taking place in the sprawling skate-topia of Port Carverton, you’ll come across dozens of big name skaters, a few cameos from those long retired, and a cast of new original characters.

The storyline is a derivative of the classic rags-to-riches story often seen in skating games, with you and your buddy starting a skateboard company and being charged with forming the perfect skate team.  The plot is paper thin and does little more than to string together the objectives and challenges, but you can’t fault a skating game for not having a brilliant narrative.

Any one who has played Skate 1 or 2 will feel right at home in Port Carverton, seeing as the controls are essentially identical.  Ditching the face-button-based approach of the Tony Hawk franchise, Skate opts for analog control.  While this results in more natural animation and more realistic skating, don’t expect to be pulling off massive combos or defying gravity. 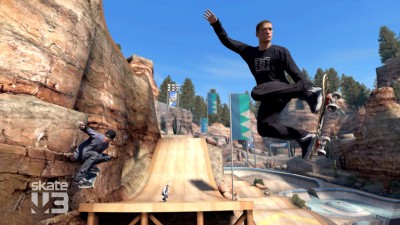 The "Super-Ultra-Mega-Park" is definitely one of Port Carverton's best spots.

Rather than reinventing the wheel, Skate 3 employs a few changes that makes the game more enjoyable.  First and foremost is the option to play the game with the camera at a high angle, allowing for a greater field of view.  Purists might enjoy the low-angle option, but those who grew up in a world where the genre was dominated by THPS, the high-angle is a welcome addition.  Players also have the ability to get off their boards, but the on-foot controls are imprecise and finicky.  But it serves its purpose by allowing players to reach places that the deck-bound cannot.

A massive addition is the new object placing feature, which allows players to conjure up props, rails, and ramps out of thin air and create their own lines within the game world.  However, you can only place objects within a certain radius of your character, which means you’ll have to run around in order to get everything the way you want it.  It’s not as intuitive or precise as the editors found in some of the later Tony Hawks, which is disappointing, but it’s rarely necessary to make progress.

The video editor is as full-fledged as ever, and it’s definitely one of the highlights of the game.  Whether you’ve just completed a nice sequence of tricks or pulled off that one-in-a-million stunt, Skate 3 gives you all the tools you need to capture it, edit it to your liking, and upload it directly to EA Nation. 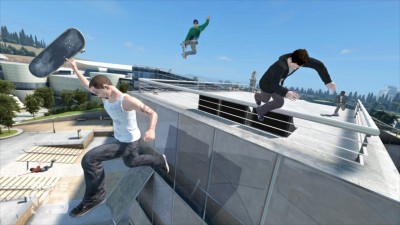 The Hall of Meat returns, but bails seem less painful than before.

The final component of Skate 3 is the online play, which is seamlessly integrated into the offline career mode.  It’s easy to jump online, play a challenge with a team of other skaters, and drop out right afterward.  The Skate Feed gives you updates on when your scores have been beaten or when people in your friends list earn Trophies or Achievements.  It’s nothing revolutionary, but it’s functional and entertaining to skate the world with some friends.

Visually, the best part of Skate 3 is the animation.  Your character moves realistically and the effects of gravity can be felt at all times.  You can outfit your custom skaters with hundreds of items of clothing and accessories, modify taunts and emotes, and naturally fine-tune your deck to your skating style.  In the audio department, an ‘interactive score’ is the highlight, with the music reflecting how well you’re skating, but the game also includes a collection of rock & hip-hop tracks as an option.

In the end, Skate 3 is worth checking out if you’re a fan of the genre.  It’s not a must-buy, and its good bits are held down by a few issues, but it’s still a fun game, albeit only in short bursts.