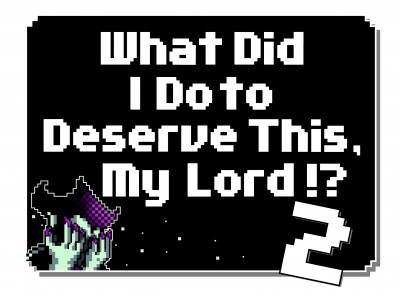 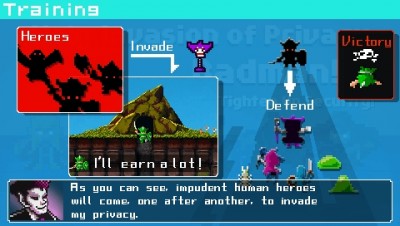 This is your enemy

What Did I Do to Deserve This, My Lord!? 2 is the latest real-time strategy/god game following its first predecessor exclusively for download through the Playstation Store. Gamers step into the role of the God of Destruction and servant of the Overlord Badman, who is trying to conquer the world. The basic objectives of the game are to build dungeons and create a monster army through the use of a natural food chain to defend the Overlord Badman from human heroes that try to seek out and slay him.

The game world is made up of nine areas that contain a certain amount of waves of heroes to defeat in order to gain control of the region. Once you choose which region you would like to attack, the dungeon screen is brought up showing the surface and the underground where there are soil blocks that players dig with the cursor in a shape of a pickaxe in order to carve out a confusing labyrinth to thwart the inevitable attack of the heroes on the surface. However, you are given a limited amount of dig power, so players need to find a balance between creating an economical and effective dungeon and creating a strong monster army. Once you’ve created a nice balance of confusing mazes and strong monsters, heroes begin their descent into the dungeon. After you’ve defeated each wave of heroes, you are able to upgrade your monster’s attack and defense attributes. Once you defeated all the heroes in that area, the region becomes a part of Badman’s dominion and a section of the Overlord’s castle begins to surface in the middle of the ocean from the depths of the netherworld. 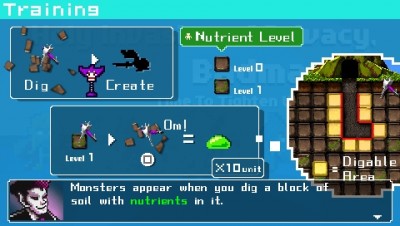 And God said let there be soilmoss?

The concepts of monster creation in WDIDDTML2!? are somewhat complex. Beginning with the soil blocks, they are rated at different levels containing a certain amount of nutrients and mana, which are necessary to create your monster army. For instance, the level 1 soil block is the most basic, which creates the soilmoss, who are nutrient carriers. In order to get the wheels moving in your monster ecosystem, you need to create these nutrient carriers in order to spread nutrients to other soil blocks in order to enrich those other blocks to create new and more powerful monsters. Knowing how to balance the food chain can take a couple playthroughs. The food chain process can be better explained in the game’s extensive tutorial as there are so many different combinations to create monsters.

Once players become familiar with the basics of the gameplay, the game becomes highly addictive because each playthrough allows for players to try different ways to create new, unique monsters providing for a new gaming experience. Also, as you discover new creatures and heroes, their information becomes compiled in the monster almanac, which allows you to see their unique attributes so that you can plan and emphasize on a much more efficient fighting machine.

Overall, What Did I Do to Deserve This, My Lord!? 2 provides an entertaining and satisfying gaming experience as it contains a good combination of in-depth gameplay in the form of the monster ecosystem, and a straightforward goal. The graphics are pretty basic at best, but represents the genre well since it is mainly a dungeon labyrinth game with creature creation not requiring a lot of graphical depth. In addition to the main story, the tutorial also contains an expanded experience by including an abundance of addicting challenges that will occupy you for hours. This game will be great for puzzle lovers and casual gamers alike. 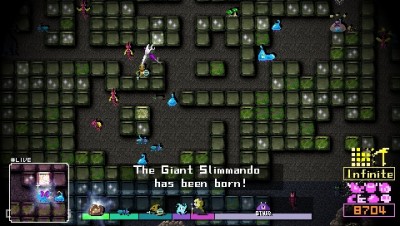