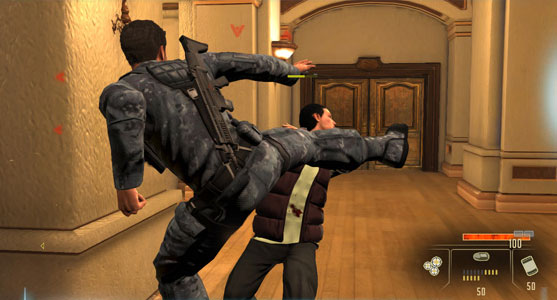 Gameplay is so bad, it's like a kick in the face!

To say I was excited for Alpha Protocol would probably be the understatement of the past two years. And I think I can speak for most of the people on staff that we were all excited for the release of  Alpha Protocol. It was, after all, in our Top 10 Most Anticipated Games of 2010. Of the games on that list, so far, this is the first dud. We should have suspected something was awry when its release was delayed again and again… (and again).

I am Alpha Protocol‘s ideal audience. 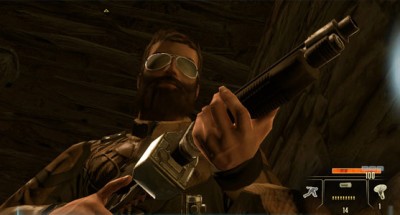 Dressing up like a badass doesn't MEAN you're a badass.

I love Obsidian’s past work. I’m a gigantic fan of stealth games. I love western RPGs. And, if you couldn’t tell by the site’s name, I’m an older gamer who appreciates a more mature storyline. Having said that, it was remarkably easy to rate AP with a “Don’t Bother” score. That’s what makes me so sad. I’m not sad because the game is only OK when it should have been great. I’m sad because the game is terrible when it should have been great.

That’s right. Alpha Protocol is a terrible game. I want to throw that right out there in the beginning of my article so it’s 100% clear to anyone who may be fooled by some of the blurbs that this game has somehow finagled. I recall seeing some blurbs in online ads saying “better than Bond,” and the blurb on the game’s homepage is “this will change the way you think about role-playing games.”

It’s not better than Bond and it won’t change they way you look at role-playing games.

In Alpha Protocol, you play the role of Mike Thorton, an agent for the government spy-training program “Alpha Protocol.” You go rogue, uncover some less than favorable things about your employer and strive to save the world from both a cold war and an actual war. Players have the choice of playing as a stealthy agent, a super-commando who loves to go in guns blazing, or a tech junkie who is a mix of the two. While all that might sound exciting, what you’re actually presented is bland, repetitive and predictable. For the most part, the game plays out like this:

The choices presented in the game aren’t really anything to get excited about either. Most of the time, your choice is either to befriend or become enemies with one of the soulless faces that the game presents to you thus altering the story a very little bit. The storyline is bland and outright predictable. The voice acting is also hit and miss.

The NPCs encountered in the action-heavy parts of the game have terrible voices, especially anyone who is playing with an Asian accent. However, most of the talking head characters do a fine job with their lines during the story sections of the game. Nolan North makes an appearance  as a character who looks exactly like Nathan Drake (surprise surprise), but is a complete psychopath. At least he changed his role a little bit. The rest of the characters in the game come across a more than a little stereotypical like the drunk Russian, the redheaded sex-bomb, the smart Asian girl, the shifty Middle-Easterner, and the power-hungry white guy in his late 40’s who owns a runs a military contractor. 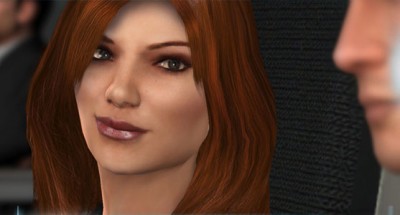 Not just a redheaded sexbomb... but a photo journalist too!

You, of course, play the young American agent who doesn’t play by the rules.

When in “action-mode” the game plays similarly to Gears of War and Splinter Cell: Conviction, but it it isn’t half as good as either. The controls are terrible. Aiming and shooting is about all the game gets right, but even they are bothersome at first. It takes a little while until your character has more control over weapons before any weapons become generally effective. The James Bond-like gadgets are fun, but you’ll resort to using guns more often than not.

The stealth play is a big fat miss. The AI will either magically see you (and shoot you) through walls, or the NPC will be permanently stuck staring at a wall or box, which takes away all the challenge of being stealthy. Eventually as a stealth agent, you can become invisible for 30 seconds at a time, which is enough to brutally slaughter everyone in the room, even if all the enemies are stuck in a cluster. No fun.

Along with the enemies that can magically see you, they can also throw numerous grenades simultaneously right at your feet with a one-second timer. Trying to even the odds, I would always throw back a few grenades of my own. After completing the game, I have never killed an enemy with a standard grenade. Enemies know the moment you throw them an instinctively run away. I was only able to kill a few with flame grenades because of their much larger area of effect.

The mini games are nothing short of a pain in the ass. Hacking computers is an eyestrain. It’s like solving a crossword puzzle where all the letters constantly change. The lockpicking is a huge miss too. SOMEhow failing to pick locks properly sets off base alarms which sends every enemy in the base to run right to your location. A failure to pick a lock should require the player to just try again. It shouldn’t set off the air raid sirens. Disarming alarms is just as much of an eyestrain as computer hacking. 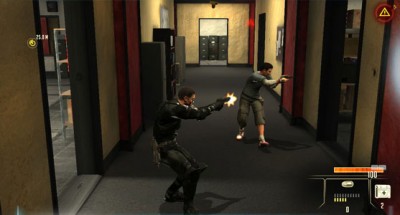 That's the psychotic Nathan Drake on the right. He's possibly one of the best parts of the game.

Movement can be a pain. Locking to cover is harder than it needs to be. You’ll also be bothered when your character can’t hop over an object that is no higher than his knees.

Basically, the whole game is loaded with ideas that are great on paper, but executed poorly. I can’t recommend this for a weekend rental. Though I was incredibly excited for this game’s release, after my first gaming session with it, I had to force myself to play it to completion for this review. I’d hate to have someone waste their money.

I could write more, but honestly, there is no end to my well of complaints with this game. In the end, the poor controls, boring story, and piles of bad game design decisions weigh down what should have been a revolutionary title. Though the story is malleable, there is still little reason to go back and play through a second time. This is easily one of the biggest disappointments in gaming this year, and possibly for this console generation. Don’t bother.