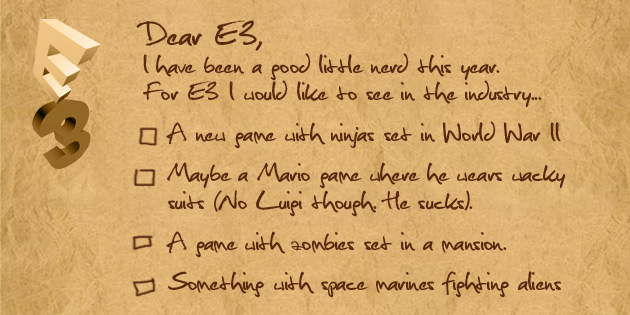 Not everyone can grace the halls of the LA Convention Center for E3 this year. But that doesn’t mean that those of us left behind can’t dream, damn it! I asked the staff what they’d like to see at this year’s show. Here’s what we all had to say.

I’m a bit of a Monster Hunter addict, waiting for Capcom to hand out my next fix. With the slightly disappointing MHTri, I’d love to see what the next PSP installment is going to offer. Other than that, the PSP2 really interests me. I still own the Fatty v1000 and am in the market for a new device. I don’t believe the PSPGO offered fans as responsive a handheld as we all wanted. This can also be referred to as two analog sticks. Seriously Sony, let’ make this happen!

I’m looking forward to seeing Microsoft and Sony try and prove that their motion controls are relevant for non-casual games, and seeing if Nintendo believes it can maintain the momentum of the Wii without announcing an HD console or some other upgrade. Furthermore, I’m anxious to see what project Respawn is working on, and whether it will be a blatant attack on the Call of Duty franchise or if West and Zampella have the guts to do something completely different. Lastly, with only 98 days to go until launch, it is time Bungie starts showing off some campaign-footage for Halo: Reach and announces some more additions to multiplayer (co-operative play, firefight, etc.).

My biggest wish for this E3 is that either Microsoft or Sony introduce an actual MMORPG that is designed to be played with a controller, and for which subscribers to the online service (Xbox Live Gold or the soon-to-be-announced PSN Premium) will either receive free membership or a major discount to offset the cost of the premium service. Especially Microsoft will have to introduce a new feature to Xbox Live to justify the yearly fees… and not just in the United States this time, ‘cos we’re paying for the service on this side of the Atlantic as well.

Motion controls, new games… nothing really stands out this year for me.

To say I’m excited for this year’s E3 would be an understatement. Besides being a huge video game nerd I’m also a pretty big technology nerd. So perhaps what I’m most looking forward to is getting an in-depth look at new technologies like Natal and OnLive. As for the actual games, there are a few titles I can’t wait to hear more about; Metal Gear: Rising, inFAMOUS 2, Motorstorm 3, Fable 3, Assassin’s Creed: Brotherhood, and Fallout: New Vegas. I’m also keeping a keen eye towards the next big project from Bioware and Bethesda. E3 2010 is sure to impress.

Even though it is getting spinoff after spinoff, and even though I did not like 358/2 Days, I am looking forward to see what Nomura is going to pull out of his Kingdom Hearts sleeve. It’s more of a morbid curiosity than anything else at this point, but I can’t help it. I also want to see what Harmonix is doing with Rock Band 3. I really want to see how the keyboard/keytar works, and I want to see if the statement “Rock Band 3 will revolutionize the music genre all over again” will stand up or fall flat. 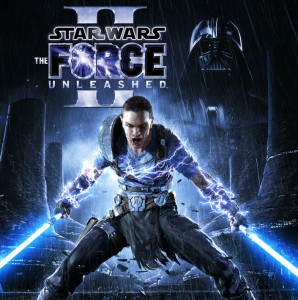 More than anything this year, I want to see games. Games, games and more games. I’d burn all the fancy new motion controls in a giant pyre in exchange for a new Tenchu game that doesn’t suck. I’d give away my wife’s cat and $60 for a new Elder Scrolls game. I want to see a lot more of Assassin’s Creed 2.5 (AKA “Brotherhood”). And I am VERY excited to learn more about Star Wars: The Force Unleashed II. Admit it. Playing with lightsabers is nothing short of awesome.

I want Nintendo to announce a new 2D Zelda game from the top-down perspective that can be downloaded directly to my Wii.

Even though this generation of consoles has made giant leaps in terms of graphical presentation, we’re definitely seeing the limitation their hardware. I want to hear that the next Xbox and PS4 are coming soon. I know the chances of that (along with most of my wishes) are painfully small, but a geek can dream.