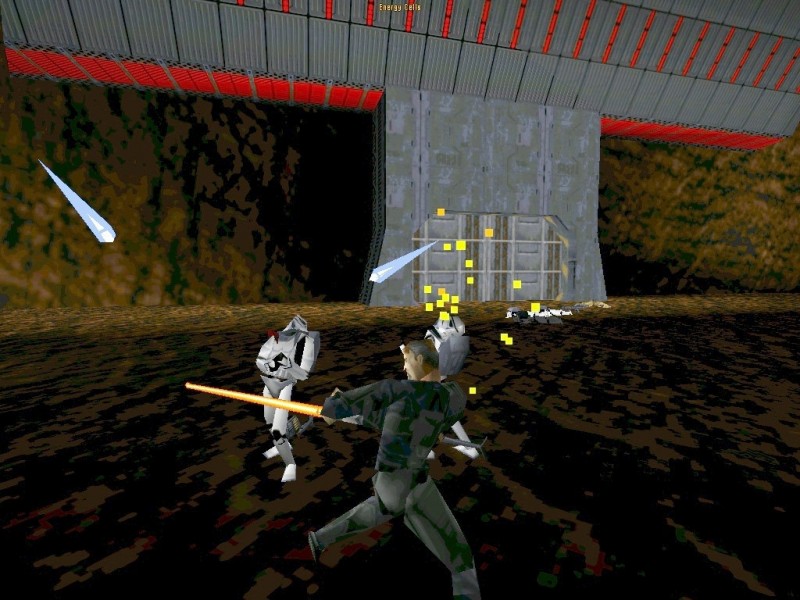 Following the continuing story of Jedi Kyle Katarn and now his new apprentice Mara Jade, Mysteries of the Sith is the third installment in the Jedi Knight series. Mysteries of the Sith was originally made as an expansion pack to Dark Forces II: Jedi Knight and at first glance it looks like the quality of the game is on par with Jedi Knight, but like most expansions, there are a few tweaks. Today you can play this game via digital download, but the question is do you want to? 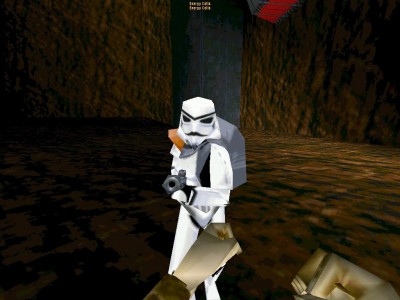 You also have your fists

Like Jedi Knight, Mysteries of the Sith is a first-person shooter with an option to go to third-person point of view. For most of the game you have your lightsaber, various blasters, explosives and force powers at your disposal. This time around the levels tend to be a bit shorter than previous Jedi Knight titles.  It tries to balance run and gun shooting with some “puzzle solving” which usually involves pressing random buttons to open doors. Mysteries controls differently from Jedi Knight, but like the other games you can go into the options menu and alter the control scheme.

Yet again you are following everyone’s favorite mercenary turned Jedi Master, Kyle Katarn. After an attack from the remnants of the Imperial Army from a weapon housed on artificial asteroids, Katarn is sent up to destroy them. While on the asteroids he finds some information about a Sith temple and leaves to go check it out. At this point you take on the role of his apprentice, Mara Jade, and do some random errands for the New Republic until you realize Kyle has been gone for a while. Then she goes to the planet where the Sith Temple is located to find him by herself because a temple filled with dark side power is exactly where a Jedi Apprentice should be alone. Overall the story is very straightforward and nothing that happens in the middle really pushes it forward. 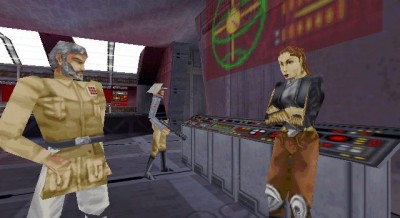 The look of Mysteries is not much different from Jedi Knight. Since it is an expansion the detail in the levels, weapons and character models are on par with its predecessor, with one exception. The carbonite freeze gun is a new weapon added in Mysteries which doesn’t look so hot when it freezes enemies. Another thing I was disappointed in was the lack of proper cut scenes. The major cut scenes in Jedi Knight used real actors and while it was cheesy it was still an effective way to get the story moving. Mysteries takes a step backward and uses in game footage for cut scenes. Clunky animation, no mouth movement and a complete lack of emotion in the faces make these cut scenes awkward and destroys whatever sense of immersion you had with the game.

The sound is also very similar to Jedi Knight. You will notice the classic Star Wars music during cut scenes, but the game play sections remain mostly quiet. The lightsabers and blasters sound like they should and the storm troopers and other Imperials still shout their same lines when they see you. However, the voice acting for just about everyone else sounds dull and uninteresting. Except the Hutt, he was okay. 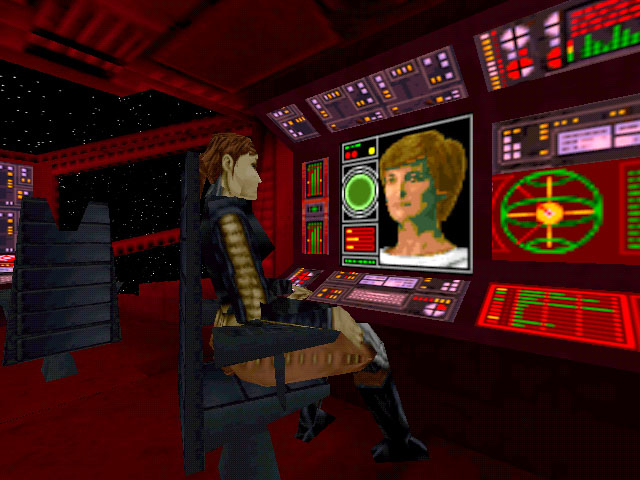 From a technical standpoint, Mysteries plays exactly like Jedi Knight. You have most of the same weapons and force powers and your ability with the force increases as you complete levels. That is not to say it is the same game. A huge change from Jedi Knight is definitely the level design. Some new weapons, powers and enemies are also added to the game. Unfortunately, not all of these changes are for the better.

Let’s get the good out of the way first. First off, most of the weapons and powers are useful and none of them seem broken. In turn, the enemy AI is more competent and they fight back better than they used to. Secondly, unlike Jedi Knight, Mysteries does not have a morality system. This means you can pair up light side powers with dark side powers which can be very useful, even if it may seem strange. Finally, the levels you play as Kyle are rather fun. They are creative, entertaining and relevant to the story. This is right about where the good points of the game come to an abrupt stop. 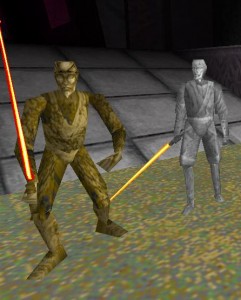 What most of the "Sith" you will fight look like

When you start playing as Mara the game seems to take a u-turn in terms of quality. The first thing I noticed was they took away all of the weapons and cool force powers you had as Kyle and gave you Mara’s gimped apprentice powers. This makes sense, but not when you are forced to use the powers to complete the levels, no pun intended. For example, if you miss a force jump in one of the earlier levels, and you will, you might have to wait around for a while for your power to recharge. The worst part about this is they do it again at the end of the game. After you get all of the cool guns you enter the Sith Temple and they all inexplicably break, presumably because of the dark side energy, and leave you with just your lightsaber. The guns are still in your inventory, but none of them work so they are just there to tease you. Taking stuff away once is fine; everyone knows that song and dance, but twice? That makes me feel like I collected a bunch of stuff for no reason.

While the weapons fiasco is annoying, the biggest hit this game takes is in the level design. The levels you play as Kyle are not too bad. The rebel base and the asteroid are pretty fun to play. Mara’s levels on the other hand are not so much fun. There are a few reoccurring themes in her levels. The first one is darkness. Many of her levels, especially the later ones are really dark and turning your flashlight on does not help at all. In order to play the game effectively you have to either keep activating force seeing or keep your map on at all times. The second is the random pressing of different switches. Most of the time the switches are for timed doors so what generally happens is you press a 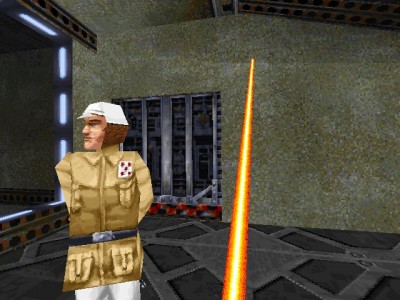 He's not the least bit concerned about the Imperial attack

switch, run across half the level to the door you think it opened and hope for the best. The last and most prevalent theme in the middle and later levels are the use of air vents as ways to get through the level. Early on I had trouble with some of the levels because the air grates you have to enter are tucked away in some random corner, but as I went on I was conditioned to checking these random corners and more often than not found the grates. All of these overused aspects made these levels a snooze fest and sometimes needlessly frustrating.

Just a side note: there is a multiplayer mode, and I tried in vain to join a match, but it required me to enter an IP address so at that point I figured it was a lost cause.

While this next problem is a pretty large one, it is the last one. I promise. When you pause the game to save, load or change your control layout it takes you to a separate screen. When I tried to resume the game it would usually crash. This might just be my system, but I’d like to think that my PC can run a game from 1998. I ended up avoiding the pause screen at all costs by using the handy quick save function, but that should not have been necessary.

I was hoping this entire series would have walked away with “worth buying” stamped on the reviews, but unfortunately I cannot recommend this one. The story is shallow and the entire middle is just filler which does not push it forward. The cut scenes and the voice acting look and sound awkward most of the time and the level designs have absolutely no variety. While there are some good points like the new force powers and the improved AI, just about everything else in the game seems thrown together quickly and barely secured with duct tape. As it stands right now Mysteries of the Sith looks like the runt of the Jedi Knight litter.