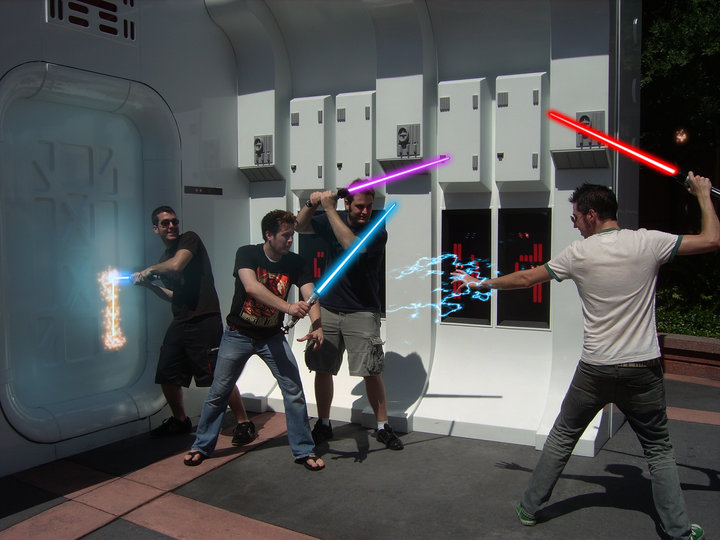 Courtesy of the guy with the lightsaber in the door

Once a year the Walt Disney World Resort in Orlando, Florida hosts a gloriously geeky event in a galaxy far far away. In Hollywood Studios, formerly MGM, fans from all over come to immerse themselves in a mixture of Star Wars and Disney during the well-known Star Wars Weekends. This event occurs four weekends out of the year, and during that time there are special Star Wars themed events, characters from the movies and animated series and people associated with the saga such as actors, voice actors and other people who worked on the films. 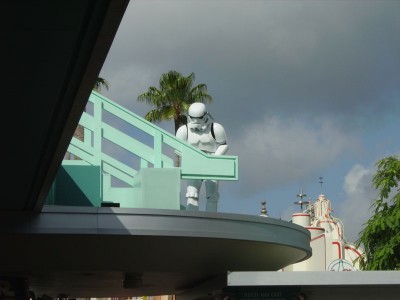 Stormtrooper above the entrance gates

Before I even entered the theme park I was surrounded by everything Star Wars. Every type of fan was present including casual fans, hardcore fans with their Jedi robes and Yoda backpacks, and fans with kids who hope to involve them in Star Wars as early as possible. At the entrance there were stormtrooper sentries standing on the roof of the gates. In addition to being “look outs” they poked fun at some of the guests. While they were entertaining during the long and hot wait to get inside, they were only the tip of the iceberg.

When my friends and I finally went through the front gates we wiped the sweat from our foreheads and headed towards Star Tours to ride it one more time before it closes in August. However, being the geeks that we are, we were easily distracted by the “Make Your Own Lightsaber” stand. After choosing your blade color and getting your hilt skeleton you build your hilt from various pieces from the lightsabers of famous Jedi and Sith. One of my friends even discovered three plastic crystals hidden inside the hilt. Even though they are just toys, it was a fun experience and a necessary step in enjoying Star Wars Weekend to the fullest.

As for Star Tours itself, it will always be one of my favorite rides. The loose plot is you are on a scenic tour of Endor’s Moon that goes horribly wrong and your tour ship ends up in the middle of the Battle of Yavin, or some variation of it. The ride is definitely dated and everything about it screams “80s!” Still, I wish it wasn’t being closed down and redone. 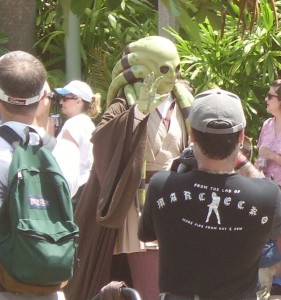 Kit Fisto in the parade

At this point I would normally write about all of the other non-Star Wars stuff we did like rides and shows, but this was Star Wars weekend dammit! I have to focus on Star Wars! A little before noon the Star Wars themed parade kicked off with Jedi Mickey riding on an X-Wing followed by Darth Goofy, Stormtrooper Donald and a group of younglings. Just about all of the staple characters were there including Vader, Jango and Boba Fett, the 501st Legion and Rebel soldiers and pilots. There were also some more obscure ones like shadow stormtroopers and Kit Fisto. At the tail end of the parade a motorcade of the celebrity hosts drove through. Among the celebrity hosts were Jeremy Bulloch who played Boba Fett, Ray Park who played Darth Maul, James Arnold Taylor who voices Obi Wan Kenobi and Plo Koon in the Clone Wars series and Ashley Eckstein who voices Ahsoka Tano in the Clone Wars.

After the parade the characters were let loose to sign autographs, take photos and pull pranks on the guests. A very friendly Tusken Raider came up to the four of us and started to put us into poses with our lightsabers. When he put me into position, he hit me in the head with my own lightsaber. At that point a stormtrooper was interacting with us as well and we were surrounded by a group of people. During our picture taking the Tusken Raider was taking directions so when one of us said “you’re a tiger!” he started crouching and clawing the air. After our photos they left to go cause some more shenanigans around the park. 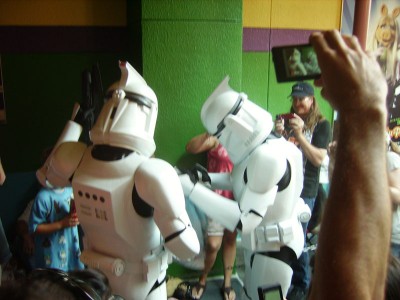 There were a couple other noteworthy pranks I saw that did not involve us. When we were waiting in line for Ray Park’s stunt show a couple of clone troopers started walking through the line. They stopped by a couple of people taking a snooze in the line and stood over them until they woke up. At that point the rest of the sleeping peoples’ party came back from shopping and the troopers took their bag and started looking through it to see what they wanted for themselves. The other prank I saw was in passing. I was walking by a group of people when I saw a jawa attempting to steal somebody’s motorized wheelchair. It is nice to see that the people in costume can have fun with their roles and actually interact with the guests rather than just walk around and wave.

The two main shows we saw at the event were “Behind the Force” and “Visit to the Maul.” Behind the Force centered around the Clone Wars animated series and gave a brief look at the voice actors and their role in making it. Jeremy Bulloch gave a short introduction and then introduced James Arnold Taylor and Ashley Eckstein. If you don’t watch the Clone Wars, you may recognize Taylor from roles such as Tidus in Final Fantasy X, Ratchet in the Ratchet and Clank series, or Captain Jack Sparrow in Kingdom Hearts II. At one point when he was doing a bunch of different voices our group yelled out “Do Tidus!” and he laughed and said “See ya!” in Tidus’ voice. 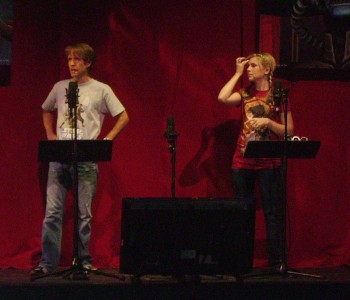 During the show they gave examples of different types of voice work they use during the series such as voice matching, which is more or less imitating already established celebrity or character voices, and automated dialog replacement (ADR). They even gave us a live example of ADR by showing a scene from the Clone Wars and saying their lines first as Obi Wan and Ahsoka, then as Captain Jack Sparrow and Veruca Salt  (Charlie and the Chocolate Factory). They then walked around the room and chose some audience members to do some brief ADR as monsters from the series, one of them being Taylor’s heart meltingly adorable daughter, and closed out the show with a sneak preview of Season 3 of the Clone Wars. Even though most adult fans might already know how the voice acting process works it was still a very entertaining show and it was fascinating to see how many different voices they can produce.

Visit to the Maul is Ray Park’s stunt show. Besides Darth Maul, Park has played roles such as Snake Eyes from G.I. Joe, the Headless Horseman from Sleepy Hollow and Toad from X-Men. Jeremy Bulloch also introduces Park, but this time he stays on stage throughout the show. During Bulloch’s introduction, Darth Maul appears on stage and starts doing some moves with his lightsaber only to have Ray Park come on afterwards and show him up. The Maul imposter then sulks off stage and the show begins. For the first half of the show Park tells the audience about his extensive martial arts training and does some demos of his different styles, one of them including a sword. For the second half he had a group of kids come up on stage and he gave them a very informal introduction to martial arts with some basic moves. The second half might sound a little dull, but Park’s energy made it very fun to watch. 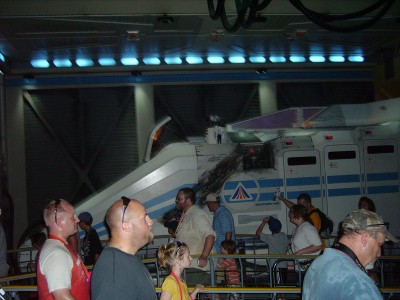 There are also some other special events that I did not attend either due to time or age constraints. First and foremost being the meet and greets with the various Star Wars celebrities. Unfortunately I was not there early enough to secure fast passes for those lines. The second is the Jedi Training Academy where kids 12 and under can become younglings and ultimately do battle with either Darth Vader or Darth Maul on stage. The last event I could not attend is Hyperspace Hoopla. This is an end of the day show that brings the various Star Wars characters together to perform a comedy show that usually involves dance offs to some well-known songs, among other things I’m sure. 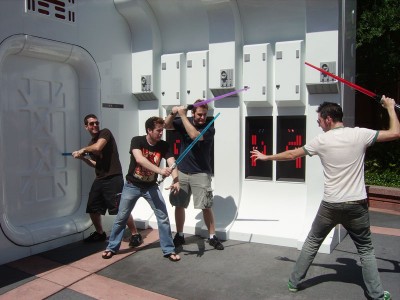 Source of the above image

Star Wars Weekends at Walt Disney World is a unique event that is well worth the high price of admission to a Disney park. At the end of the day I saw two shows, hopped on some rides, saw a ton of characters and walked away with a t-shirt, a lightsaber, some great photos and my geekiness satiated. If you have the means I highly recommend checking it out next year. I definitely will be.