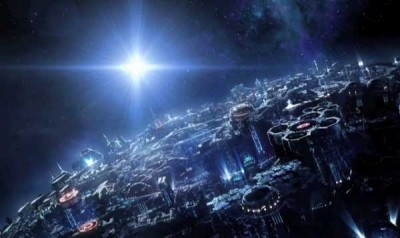 Transformers is one of those long running series that is imbued with some kind of rose smelling superpower. You see, much like other age-old cartoon series like Teenage Mutant Ninja Turtles, Transformers has suffered from a myriad of developers and directors shoveling huge mounds of shit on top of the license and yet there still seems to be a large public demand for the product. Don’t get me wrong, I enjoyed watching the Autobots battle the Decepticons as a child. I remained a fan through the excellent Beast Wars series, but then it started happening.

Ka-thunk, a steaming pile of Beast Machines lumped onto the franchise. Ka-thunk, shovel in a rank load of Transformers: Armada.  Oh, what? Optimus Prime can’t breathe under all of this shit? Screw it, he’s a robot, he doesn’t even have lungs. Let’s give the whole thing to Michael Bay. He doesn’t kill children’s dreams, right? Autobots, transform and roll-gargle gargle, blecht. Oh, Optimus, at least they won’t make another terrible cartoon of you while you hiding under all that fecal matter… what? Transformers Animated? Why do they all look like cats? Nooooooo! With the franchise buried so deep under all this crap, you’d think it would take a fleet of Constructicons to dig them out, but can the new Transformers: War for Cybertron give the Transformers the pressure washing they’ve needed since 1998?

From a gameplay standpoint, War for Cybertron follows a fairly traditional formula. The game is a heavy third-person shooter that feels like the love child of Gears of War and Unreal Tournament 2004. Where this may make it sound like the messiah for the series, you have to remember that the baby is still buried under a ton of robo-poo. From Gears of War, the game takes the “shoot a bunch of enemies and then run to the next bunch of enemies” play style, and from Unreal the game takes the “run like a crazy person while shooting without any shred of precision” aspect. Together they make an entertaining, if not generic,  scrap fest. You’ll often find yourself jumping like a madman hoping that your braindead AI partners block the bullets long enough for you to try to get close enough to one-hit melee the enemies.  However, some of the boss battles are so huge and over-the-top, that you can forgive  the thousand clone troops running at you aimlessly hoping that you’ll kill them before the next movie sequel. Who knew Jazz was the lucky one? 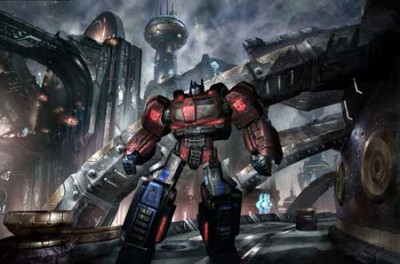 Oh, Optimus Prime, why can't you always look this good?

Still, these aspects do not prevent the single player from being fun, and if a game can overcome being generic,that’s a really good sign about its quality. Any time you can find a second to transform, the game’s fun level rises dramatically. The transformations are incredibly smooth and can lead to some impressive scenarios. I found myself ramping off a cliff at high-speed, transforming in mid-air and hitting a flying Autobot in the face before grenading the remaining three bots still on the ground below me. Similarly, the banter that occurs between your team of Autobots or Decepticons is often witty and ads a much needed life to the characters. You’ll find yourself pressing forward just to reach the next cut-scene or conversational piece and nergasm when someone makes a statement that you remember from your childhood. Sadly, some of the environments suffer from the constant-metallic-hallways syndrome. But the strange rule that everything on Cybertron has to transform in some way livens up some of the dreary repetitive areas.

Speaking of things you remember, the War for Cybertron’s story has very little to do with any of the cartoons or movies that have been released, and before you make any judgment, this is a GOOD thing. The story remains fairly interesting and gives some unique background information to the more popular transformers like Starscream and Optimus Prime. It takes place before the Transformers crash-land on earth and follows Megatron’s crusade to take over the Transformer’s home planet with a powerful weapon known as Dark Energon. The game lets you take the side of both Decepticon and Autobot, but sadly can be finished in a little less than eight hours.  The designs for the characters are dramatically different as well. They are developed to be an alternate form of what each of your favorite robots might have looked like before they saw what earth vehicles looked like. In the end, both serve as a major driving force for the games replayability. 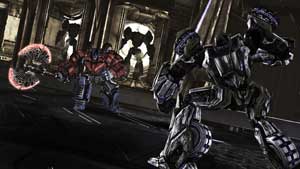 Most fights come down to who can melee the fastest.

What really sells the game, however, is the online. It’s been a long time since I’ve enjoyed a shooter’s online system, but I felt that War for Cybertron delivers in spades here. The online consists of several versus modes: Deathmatch, Team Deathmatch, Power Struggle (Zones), Conquest (King of the Hill),Code of Power (Capture the Flag) and Countdown to Extinction (Bomb). The varied array of flyers, tanks, cars and trucks make each battle a hectic and exciting affair. From the stealth scouts to the firepower heavy Soldiers, each battle ends up being an insane war reminiscent of the classic Unreal days.  In addition to the versus modes are two co-op campaigns. The two modes are Escalation, which has players fighting against waves of AI- controlled enemies that increase in difficulty as time moves on and a three player Story Co-op. Now would be a good time to say the Story Co-op is ONLINE ONLY. I was very disappointed that, once again, local co-op was overlooked, but if you have no friends nearby, it is a welcome addition.

So, is Transformers: War for Cyberton the divine flood that will wash away the Brown Energon deposits that have buried the series? In a word, no. If you are not already a fan of the Transformers  you are going to find very little joy from this game, but if you’re turned on by the idea of a transforming boombox  you should at least give this game a rent. The voice acting nostalgia alone will make it worth the minimal time you put in. The game may not be the clean wash we were all hoping for, but it is a sick-ass shovel that can transform into a robot and help you begin digging your favorite franchise out of the murk.