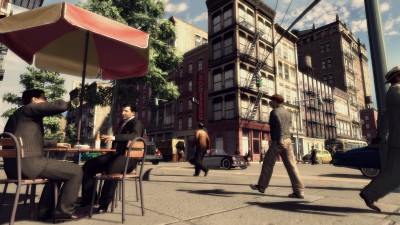 2K’s Mafia II has previously announced exclusive day one DLC for its PS3 version, but we are now getting some details on what we can actually expect to play on the platform. “The Betrayal of Jimmy”, available via vouchers included in new disc copies of the game for free, will also be available for $10 later on the PSN. The game’s second major batch of downloadable content, “Jimmy’s Vendetta”, will be available across PS3, 360, PC, with pricing and release details to be announced later.

From the game’s official description:

The Betrayal of Jimmy will take players into an alternate perspective of the mob through the eyes of Jimmy, a mercenary. Jimmy is the guy the other guys call when they need to finish the job. The Betrayal of Jimmy features dozens of intense newly created arcade-style, city-based missions that keep Jimmy driving, shooting and rampaging through Empire Bay.  Missions will unlock as they progress, activating a slew of assassination and timed vehicle missions ending in dramatic shootouts and explosive car chases. Players will rack up points for performance, power slides, and skill shots. The scores will be immediately posted to the new leaderboard system, providing extensive re-playability, as players work to rise to the top of the ranks. Get to know Empire Bay – the executioner’s way.